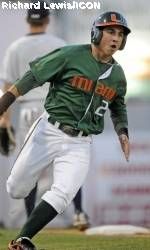 For just the second time in head coach Jim Morris’ 17 seasons in Coral Gables and the sixth time in school history, the Hurricanes scored double-digit runs in back-to-back games to open the season – scoring 10 a night after plating 12 runs in the opener on Friday. The win also secured a series win for the `Canes – the second straight year Miami opened its season with a series win over the Scarlet Knights.

Junior leftfielder Chris Pelaez and senior second baseman Scott Lawson led the offensive charge for the `Canes. Pelaez finished the night 3-for-3 with a double, two singles, a hit-by-pitch, three RBI and a run scored while Lawson also went 3-for-3 with a triple, two singles, two hit-by-pitches, three runs scored and a run batted in. Through UM’s first two games, Lawson and Pelaez have combined to reach base in 12-of-16 plate appearances.

Eric Whaley (1-0) earned his first career win as a Hurricane, allowing two runs on one hit while striking out three in two innings of work. David Gutierrez came on in the ninth with the `Canes up two and retired the Scarlet Knights in order to record his first save of the season and the second of his career.

The game, which lasted nearly four hours, drew more 3,135 fans a night after 3,287 attended the opener.

Working on a pitch count, UM starter Chris Hernandez allowed just one run on four hits while walking two and striking out five in just four innings of work. Iden Nazario, Jerad Grundy and Daniel Miranda bridged the gap between Whaley and Gutierrez.

Yasmani Grandal (1-for-3) reached base three times and scored twice for Miami while David Villasuso (1-for-4) drove in a pair of runs.

After threatening to score in each of the first three innings, the Scarlet Knights finally got on the board in the fourth when a Brandon Boykin single up the middle scored Jayson Hernandez from second.

Rutgers lead didn’t last long as the `Canes scored a pair of runs in the bottom of the fourth to go up 2-1. After Harold Martinez walked and moved to second on a balk, Pelaez smacked a double in the right-center gap, bringing Martinez around for UM’s first run. Ryan Perry followed Pelaez’s double with a sacrifice bunt, moving the left-fielder to third with one out. From there, Nathan Melendres dropped a suicide squeeze bunt down that brought Pelaez across.

Biserta quickly put Rutgers back on top with his two run shot to right off Whaley, giving the Scarlet Knights a 3-2 advantage after 4 ½ innings.

Like the inning prior, Miami quickly bounced back with two more runs to take a 4-3 lead after five. Villasuso drove in the tying run with a single through the left side before Pelaez’s drove in his second run of the game with an RBI single to left-center, scoring Grandal from third.

Miami broke the game open in the sixth, scoring five runs on five walks and three singles in an inning in which the `Canes batted around.

After scoring another run in the seventh to go up 10-3, Rutgers made a late charge in the eighth, scoring five runs to cut UM’s lead to two but Miranda and then Gutierrez shut the Scarlet Knights down to secure the win.

The two teams will conclude the three-game series Sunday at 1 p.m.