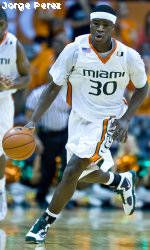 CORAL GABLES, FLA. – The University of Miami men’s basketball team plays host to Wake Forest in its ACC home opener on Sat., Jan. 9, in a nationally-televised game at the BankUnited Center at 6 p.m.

Miami rides a six-game win streak after returning to the east coast following an 86-63 rout of Pepperdine, while the Demon Deacons — who have won seven straight — hit the road after back-to-back overtime victories at home.

The Hurricanes closed their non-conference slate with a perfect 14-0 mark — going undefeated in non-league play for the first time in school history. Their lone loss in 15 games this season was a one-point defeat in the ACC opener at Boston College on Dec. 6. The Hurricanes have never dropped back-to-back games to open its ACC schedule.

Wake Forest leads the all-time series, 7-2, however Miami was victorious in the last meeting between the teams.

Behind 32 points from two-time All-ACC First Team selection Jack McClinton, the Hurricanes rolled to the 79-52 win over the then-No. 6/7 Demon Deacons at the BankUnited Center on Feb. 4, 2009. UM kept Wake Forest to 31.7 percent shooting, including a 3-for-20 effort from long range, and used a 25-8 run over the first 9:10 of the second half to extend what was a three-point halftime lead for the Hurricanes into one of their most noteworthy wins of the season — and the most lopsided loss of 2008-09 for the Demon Deacons.

Miami outscored Wake Forest, 50-26, in the second half. Adrian Thomas went 4-for-5 from beyond the arc to add 14 points to Miami’s winning effort, while Jeff Teague and James Johnson had 19 and 11 points, respectively, for Wake Forest.

Both of the Hurricanes wins over the Demon Deacons occurred at the BankUnited Center (2009, 2006).

UM’s previous three losses at Wake Forest were by an average of 2.7 points per game.

BOTH SIDES OF THE BALL

U CAN’T TOUCH THIS

Miami’s eight wins of 20-or-more points this season ties for the most in program history — matching the 1928-29 team.

Miami’s 52.6 field goal percentage in Sunday’s win at Pepperdine marked the eighth time this season the Hurricanes have converted at least 50 percent of their field goals. That’s nearly as many as the nine times over the previous two seasons combined (2007-08 and 2008-09) that UM hit its mark so accurately.

Thomas’ career-high five-for-six performance (.833) from beyond the arc at Pepperdine ties for the second-best three-point field goal performance in Miami history and the best three-point percentage in a game by an ACC player this season (James Dews also went 5-for-6 on Nov. 25 versus Florida Gulf Coast). Thomas has made at least one three-pointer in 30 of his last 34 games, including 12 games with three-plus treys, and ranks seventh in the ACC in both three-point percentage (.440) and threes per game (2.2). He has made a trey in nine-straight games — the second longest active streak in the ACC.

With three of Miami’s first four ACC games on the road, the Hurricanes head out for games at Virginia Tech (Wed., Jan. 13) and Virginia (Sat., Jan. 16) next week, before returning home to host Boston College in a re-match on Tues., Jan. 19, at 9 p.m. at the BankUnited Center.