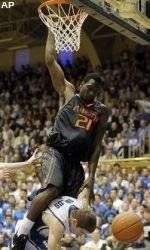 CHARLESTON, S.C. – The University of Miami men’s basketball team takes its two-game win streak on the road for this week’s Charleston Classic in Charleston, S.C. Miami opens the tournament versus Tulane on Thurs., Nov. 19, at 1:30 p.m., in a game to air live on CSS.

^ steals per game | * blocks per game

CSS will also broadcast the Hurricanes’ second-round game against either 2009 NIT champion Penn State or UNC Wilmington on Fri., Nov. 20. The final round of games will be held on Sun., Nov. 22, with ESPN2 carrying the championship game at 6 p.m. Potential Sunday opponents are South Carolina, Davidson, USF and La Salle.

The Hurricanes finished in third place in the 2008 Paradise Jam in the Virgin Islands, competing in what was considered the strongest field in tournament history. Miami knocked off three teams to win the inaugural Puerto Rico Classic in 2007.

Thursday’s game between the Hurricanes and Green Wave marks the ninth meeting between the programs, with the all-time series knotted at 4-all. Miami has won two straight over Tulane, including a 93-60 win in the teams’ last meeting on March 3, 1990. Three of Miami’s five freshmen hitting the hardwood on Thursday were not born yet.

Tulane brings a 0-1 record into Charleston after dropping its home opener to Georgetown, 74-58. Kris Richards led the Green Wave’s effort with 15 points.

After knocking down a career-high five three-pointers versus Nova Southeastern — on 5-of-7 shooting from beyond the arc, senior James Dews needs just one three-pointer to enter UM’s top 10 in career treys… Sixth-year head coach Frank Haith earned career win number 90 in Miam’s 108-58 rout of Nova Southeastern… Senior big man Dwayne Collins needs just 81 points to become the 30th Hurricane to score 1,000 career points… The Hurricanes are playing in five games over the first nine days of their season. Thursday’s game versus Tulane is UM’s third in six days.

Seniors Dwayne Collins and James Dews are making their 100th appearance as Hurricanes in Thursday’s game vs. Tulane, and will be the 32nd and 33rd players to appear in 100-or-more games in Miami basketball history. Brian Asbury set the school record last season with 130 appearances over his collegiate career.

True freshman Durand Scott dished out a game-high and ACC freshman-record tying 10 assists with zero turnovers in Saturday’s season-opening victory over North Carolina Central en route to ACC Rookie of the Week honors. It was the most assists by a Hurricane in exactly three years, since Anthony Harris finished with 10 assists versus Alcorn State on Nov. 14, 2006. In addition, Scott is just the second Hurricane in program history — and the first since Thomas Hocker accomplished in 1990 — to record double-digit assists without any turnovers.

Scott followed that strong debut with 14 points (4-5 FGs, 2-3 3FGs, 4-5 FTs), eight assists, five rebounds and one steal in 22 minutes versus Nova Southeastern. He dished out 16 consecutive assists to start the season before committing his first turnover on an offensive foul with 8:44 remaining in the first half on Monday evening.

Miami, who registered 26 assists versus Nova — the most since a school-record 29 versus Florida Southern on Nov. 9, 2007 – has also gotten strong play at the point from redshirt sophomore Malcolm Grant and freshman Antoine Allen. Allen finished with eight points and seven assists (one turnover) on Monday, while Grant added 17 points and four assists.

James Dews led four Hurricanes in double figures as Miami cruised to the 108-58 win over Nova Southeastern on Monday. Dews converted a career-high 5-of-7 three-pointers en route to a game-high 19 points as UM hit 14 shots from long range at a 51.9 percent clip. It is the most three-point baskets since Miami hit a school-record 15 treys versus Georgetown on March 3, 1993. Six Hurricanes connected from beyond the arc, as Antoine Allen, Durand Scott, Malcolm Grant, Garrius Adams and Adrian Thomas added to the three-point barrage.

Dews opened the game with a three-pointer and Miami would nail nine shots from beyond the arc in the first 10 and a half minutes to take the 35-9 lead. The Hurricanes converted 12-of-17 first half three-pointers — 70.6 percent — to take the 61-18 halftime advantage.

All 13 Hurricanes scored as Miami got 51 points from the bench, including 17 points and four assists from Grant and 10 points from Adams. UM led by as many as 53 points, as they dominated the boards with the 52-24 rebounding advantage and shot well from everywhere on the court — 53.0 percent from the field, 51.9 percent from long range and 85.7 percent from the line.