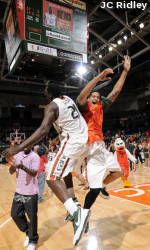 CORAL GABLES, FLA. – The University of Miami men’s basketball team, staff, family and supporters gathered at the BankUnited Center on Wednesday evening to honor the team’s graduating seniors and celebrate the 2008-09 season at its annual postseason banquet.

The evening’s program included a buffet dinner, player introductions, a question and answer session with the four seniors – Jack McClinton, Jimmy Graham, Brian Asbury and Lance Hurdle – and Coach Haith and a season highlight film, in addition to the presentation of team awards. The recipients of the Most Valuable Player, Most Improved Player, Ultimate Teammate, Most Outstanding Defender and the Hustling Cane awards were decided by a vote of team members.

A two-time First Team All-ACC selection, McClintonwas named the team’s Most Valuable Player for the second-straight season, in addition to earning Best Free Throw Percentage and Best Three-Point Field Goal Percentage distinctions. He was the recipient of the Evelyn Schwartz Award presented by the Golden Canes to a Miami student-athlete who demonstrates outstanding leadership and character.

After battling back from back-to-back season-ending injuries, Adrian Thomas was recognized as the team’s Most Improved Player and with the Outstanding Student-Athlete Award.

Jimmy Graham also picked up a pair of team awards for the second-straight season, as the squad’s Outstanding Defender and top shot blocker.

Other Hurricanes to be honored included James Dews with the Hustling Cane award, Brian Asbury with the Ultimate Teammate Award, Dwayne Collins as Chairman of the Boards (top rebounder) and Lance Hurdle with Best Playmaker honors.