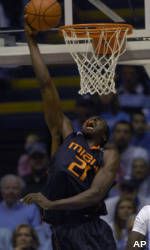 ATLANTA, GA… – The ninth-seeded University of Miami men’s basketball team opens the 2009 ACC Tournament versus eighth-seeded Virginia Tech on Thursday at the Georgia Dome at noon. The game will be carried live on FSN Florida.

Winners of three of their last four games, the Hurricanes have advanced past the opening round of the ACC Tournament in three-straight seasons — including an upset of fifth-seeded Maryland in 2007. The winner of the Miami-Virginia Tech game advances to the ACC quarterfinals to face top-seeded North Carolina (27-3, 13-3) on Friday at noon. The Tar Heels, along with the other top-four seeded teams, receive a first-round bye.

Three teams — Miami, Maryland and Virginia Tech — finished 7-9 in ACC play this season, with Maryland earning the No. 7 seed, Virginia Tech the 8-seed and Miami the 9-seed due to tiebreaker procedures related to head-to-head results and team results versus the highest-seeded teams.

The Hokies ride a three-game skid into Atlanta and have dropped six of their last seven games.

Thursday marks the 16th meeting between Miami and Virginia Tech, who both moved from the Big East to the ACC in 2004-05. Miami leads the all-time series versus Virginia Tech 8-7, however the Hokies have won two straight over the Hurricanes — including an 88-83 overtime decision in Coral Gables on Jan. 25.

The teams have met once in the postseason, with the Hokies taking the 63-49 win in the second round of the 2008 ACC Tournament.

In the last meeting between the teams, five players scored 20-or-more points — Dwayne Collins (23), Brian Asbury (21) and Jack McClinton (20) for Miami and Malcolm Delaney (29) and A.D. Vassallo (28) for Virginia Tech.

For the second-straight season, Jack McClinton was named to the All-Atlantic Coast Conference First Team. Miami’s first-ever All-ACC First Team pick as a junior in 2008, McClinton was one of just two repeat selections on the 2009 team alongside North Carolina’s Tyler Hansbrough.

An All-ACC Third Team selection in his first season competing for the Hurricanes in 2006-07, the senior guard repeated as a first-team pick this season after once again leading the league in three-point field goal percentage (.464, third in the nation), three-point field goals per game (3.1) and free throw percentage (.885, ninth in the nation), while ranking third in scoring with 19.7 points per game – including an 21.8 point average in ACC games (second-best in the league).

The Baltimore-native is the ACC’s all-time leader in three-point field goal percentage (.443) and ranks second in career free throw percentage (.900).

McClinton is just the second Hurricane to earn back-to-back first team all-conference honors. All-American Tim James was the first to do so as he was named to the First Team All-Big East in 1997-98 and 1998-99.

Jack McClinton is the only All-ACC honoree — on any team — to also earn All-ACC Academic Men’s Basketball Team recognition this season (his third straight). In 2008, he was the only First Team pick to also earn academic honors.

McClinton has also been selected as a recipient of the Weaver-James-Corrigan Honorary Award. He is among six student-athletes — and just two men’s basketball players — selected for the honorary award which recognizes individuals for their outstanding performance in both athletic competition and the classroom throughout their collegiate careers and intend to compete at the Olympic or professional level.

With a program-best 16-for-16 performance from the line versus NC State, Jack McClinton moved into first place in the ACC in free throw percentage, converting .885 of his shots from the line this season — ninth best in the country. McClinton, who has hit 27-straight free throws, has led the ACC in free throw percentage for three-straight seasons — every season he has competed in the league.

His previous high and UM-best was an 11-for-11 performance in the 2008 NCAA Tournament win over St. Mary’s.

In addition, he has led the ACC in three-pointers per game in three-straight seasons and in three-point field goal percentage in two of three seasons (he just slipped out of the top spot in 2008 following the ACC Tournament).

Miami has played the nation’s THIRD toughest conference schedule, while its overall strength of schedule is ranked 25th in the country and among the top half in the ACC. The Hurricanes have played five games versus teams that have been ranked No.1 this season and have played four of the five teams that have been atop the polls in 2008-09 — UConn, North Carolina, Wake Forest and Duke.

The Hurricanes have six wins over the top 100 teams — with a 27-point victory over Wake Forest, a series sweep of Boston College and wins over Florida State and Maryland at home, as well at Kentucky. Six of UM’s 11 losses are to teams ranked among the RPI’s top 25, while its only non-conference losses are to Connecticut in the Virgin Islands and to Ohio State in the ACC/Big Ten Challenge.

The ACC Tournament in Atlanta marks a return home for true freshman DeQuan Jones — a native of nearby Stone Mountain. Jones has played in all 28 games this season, with three starts and a dynamic dunk at North Carolina. As a high school senior, he was ranked as the nation’s 11th-best small forward and 28th-best overall player by ESPN.com, earning Class 5A Player of the Year honors by the Atlanta Journal Constitution.

As a prep, Jones was also named to EA Sports’ All-America Second Team and to the Parade All-America Fourth Team. The five-star recruit helped his Wheeler High School team to a No. 18 national ranking by USA Today and an appearance in the state finals.

Miami closed the 2008-09 regular season with a 12-4 mark at home, winning eight of its last 10 in Coral Gables. The Hurricanes have gone 56-23 (.709) at home under fifth-year head coach Frank Haith. The Hurricanes notched double-digit home wins at the BankUnited for the second-straight season and for the fifth time in six full seasons calling the arena home.

The Hurricanes overcame a slow start to knock off the visiting Wolfpack, 72-64, on Senior Day for Jack McClinton, Brian Asbury, Jimmy Graham and Lance Hurdle at the BankUnited Center on Saturday.

Miami finished with seven-plus ACC wins for the fourth time in five seasons in the ACC. The Hurricanes have advanced to the postseason in the previous three seasons in which they accomplished this.

All four seniors (Asbury, Graham, Hurdle and McClinton) took the court as starters today for the `Canes in their last-ever home game. It marked the school-record setting 127th career appearance for Asbury, bypassing Anthony King’s record of 126 set in 2008.

The Hurricanes turned the ball over a season-low five times, building a 20-4 advantage in points off turnovers versus the Wolfpack.

Miami’s 21 first half points were the fewest since Nov. 18, 2007 — 18 vs. Providence in the O’Reilly Auto Parts Puerto Rico Tip-Off championship game. Miami came back to win both games — including a 64-58 decision in Puerto Rico.

McClinton extended his three-point streak to an ACC-long 32-straight games, tying Steven Edwards (1994-95) atop the UM record books for consecutive games with a trey.

Asbury scored in double figures for the fourth consecutive game, for the sixth time in the last seven games and for the 11th time this season. He is averaging 13.5 points, 7.8 rebounds and 1.8 assists over his last four games, shooting .541 from the floor, .400 from long range and .833 from the line

Finishing with a game-high 24 points, McClinton has now scored 20-or more points in a game 36 times in his career, placing him fifth on the all-time list for career 20-point games… McClinton is tied for ninth at UM for 20-point games in a season, matching Joe Wylie (1990-91) with 15 this season…  McClinton has scored in double-digits in 53 of his last 55 games, as well as 83 of 92 games as a Hurricane…  It was his 28th double-digit output of the year, extending his consecutive games in double-figures to 25 games — second-best in the ACC.

Hurdle tied a career-high with three three-point baskets. It is the first time this season he’s connected on multiple three-point shots and scored in double figures in back-to-back games.

Graham moved into fourth place on the ACC’s active career blocked shots leader (103). He also tied a career-high with three steals for the second-straight game.

With 25 made free throws, Miami has now connected on 20-or more from the line seven times this season.