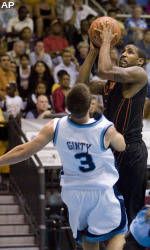 LEXINGTON, Ky. (AP) – For the second time in five days, Miami watched a big lead begin to dwindle. This time, Jack McClinton was still around to help stop the bleeding.

The Hurricanes’ leading scorer was back in the lineup — and back to his old ways with 23 points — as Miami (No. 22 ESPN/USA Today, No. 21 AP) defeated ice-cold shooting Kentucky 73-67 on Saturday.

Miami saw a 15-point lead over Ohio State evaporate Tuesday, in part because McClinton was ejected after being called for a flagrant foul.

But Saturday, as a 21-point Hurricane lead dropped to four, McClinton and his teammates wouldn’t allow another such comeback to be successful.

“I wanted to come out and start from where I left off in the last game,” said McClinton, who again apologized for his actions against Ohio State. “We came out with a victory, and it feels great.”

McClinton had plenty of help in this one, particularly from James Dews, who had a season-high 18 points, including 3-pointers to match his career best.

The tale of the tape in this one was found beyond the arc. Miami (5-2) matched a season high with eight 3s, while Kentucky (5-3) misfired on 23 of 25 from behind the line.

The Wildcats had their worst shooting game of the season, going 25-of-70 (35.7 percent). Even two late runs couldn’t make up for the woeful early shooting.

“We missed too many shots early,” Kentucky center Patrick Patterson said. “We have a bad habit of starting off sloppy. It’s painful. They were handing us the game. We just didn’t take advantage.”

Down 49-28, Kentucky went on a 12-1 run to cut the deficit to 10. The Wildcats would get within four a few minutes later after a fastbreak layup by DeAndre Liggins and another one by Jodie Meeks, fed by Liggins following a steal.

But Miami’s victory was preserved by two long jumpers by Brian Asbury.

The first appeared to be a 3, but his foot was ruled on the line. The second was a no-doubter, pushing the Hurricanes’ lead to 65-56 with under two minutes left.

“A key thing that we talked about with this team is to have other key guys start making plays,” Miami coach Frank Haith said. “Jack McClinton obviously made his plays, but we had other guys step up.”

Asbury’s 3 was Miami’s only one of the second half, but it appeared early that the Hurricanes’ sharp-shooting guards were going to overwhelm the Wildcats much the way VMI did earlier this season in an upset win.

“Coach wants us to get open looks and take the shots,” Dews said. “We have to be confident, and that’s what we did tonight.”

The taller Wildcats did the things they were expected to do, such as dominate the paint with 36 points compared to Miami’s 18, and outrebound the Hurricanes 45-35.

Patterson had a career-high 16 rebounds to go along with his 19 points, his fifth double-double of the season.

Liggins, a freshman, also had a standout offensive game with several highlight reel plays en route to a career-high 18 points, but he was 0-for-8 from 3-point range. Meeks, Kentucky’s usual long-range specialist, wasn’t much better, hitting just two 3s in the first half and missing his other 10 tries.

Miami was fighting to remain in the Top 25 after the home loss to Ohio State. Kentucky hasn’t beaten a ranked opponent since topping Tennessee last January.

Kentucky point guard Michael Porter, wearing a headband to cover up a laceration that required 10 stitches after his collision with teammate Ramon Harris, started the game but fouled out with only two points. Harris, who is sidelined indefinitely, attended the game wearing a neck collar.