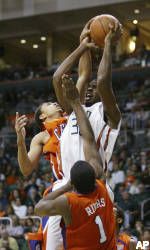 “Obviously we are very excited about the start of basketball season. We just got back from Operation Basketball. There is no question this team has a chance to be a very good basketball team. I want to clarify one thing about Jack [McClinton]’s comment of us winning a national championship. I don’t think it was said that way. I think Jack’s comment was if you make it to the NCAA Tournament, then you are competing for a national championship. All 65 teams in that tournament are competing for it. I think that is our goal, to have an opportunity to get back to the NCAA Tournament and to compete with the other 64 teams for a national championship. I don’t want it to be taken that we are going to beat our chests to be national champion contenders. But, with that said, we have a very good basketball team – a team that I think is very deep. I think that it is experienced, the most experienced team since I have been here. I look at our senior class and it is very gratifying when I think back. I go back to Jimmy Graham and Brian Asbury because those are the two guys that were a part of the first freshmen class that we recruited. Jack came along in that same class but sat out that year. And Lance Hurdle is a senior. But it is very satisfying to see those guys get from where they were four years ago to where they are today; to see their improvement in their game and as people, as men. They have come a long way. I am extremely excited not only about this season but about the future of Hurricane Basketball. I am excited about what we have been able to accomplish over a four year period and the direction that we are headed.”

“I have a tough time with expectations. I don’t think that it will have much to do with what our team does. I think we are going to work accordingly. We are going into every year with the same focus, demanding the same things and acting the same way. Because someone picked us last [last year], I did not coach differently. My first year we were picked last, three out of the four years that I have been here we have been picked last. Go back and look at it. We actually finished last one time and I don’t think we will do it again. We had eight guys miss 72 games – that was the year we finished last. I think that we are going to coach the same way regardless. It doesn’t have anything to do with what people say about us. Our expectations every year are to improve as a team and as a program.

We are very excited about the improvement that we have made with this program. It was important to us when we took the job four years ago to build a special program. We are on schedule and maybe a little ahead of schedule. I thought that this season would be our first special season because we have our first senior class. But obviously we had a very good year last year. It is gratifying because we are working hard. Our staff is working real hard and the players are working extremely hard to accomplish our goals.”

On a preseason ranking…

“It’s a big deal for recruiting. When you are trying to build and maintain a program it’s all about recruiting the players. It is something that you can look to and point to for prospective student-athletes. We are a program that is on the rise. That is all it means. Preseason ranking, early-season rankings… they all change throughout the year. I want to be ranked at the end of the year.”

“Jimmy is a strong kid. I think that starting out Jimmy will be in the starting lineup. Obviously it is something that we will monitor and figure out what is best for our team. Jimmy will have minutes. We have a lot of depth. Jimmy is as important as anyone on our team. We want Jimmy to be able to play at that end of our games because he is such a good defender and rebounder. I think that his role is that. If you go to last season, Jimmy was very critical coming off the bench because he is a valuable guy late in ball games.”

“Let’s start with Cyrus McGowan, a transfer from Arkansas. I think Cyrus will play a great deal. Cyrus reminds me of a Rodman-type player. He’s very athletic; he’s a bouncy-kid, a live-kid who plays with a lot of energy. He is very much like Jimmy, will take charges. He will have an impact.

Julian Gamble has made great strides in his game. Offensively, he has the best skill technique around the basket. He is a lefty as well. He is 6-9, 250 pounds with long arms. His agility has gotten a lot better and he runs the floor very well.

Then there is Adrian Thomas, who people have probably forgotten about since he has been injured for about two years. He has the chance to be a very special player for us. Over two years he has become a very good shooter partly because when you’re hurt and on the sideline you work on your shot. I like that about him. If he is able to stay healthy he will help us too.

And the newcomers are DeQuan Jones, who everyone is talking about. DeQuan athletically and talent-wise is the best recruit since we got here. He is very gifted… He is strong and can make athletic plays above the rim.

Reggie Johnson could be an offensive lineman, I’m sure that they would take him over there. But he is down to 305 pounds. He has great hands, great feet. He has done well so far.”