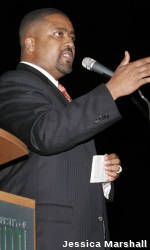 CORAL GABLES, FLA. – The <?xml:namespace prefix=”st1″ ns=”urn:schemas-microsoft-com:office:smarttags”?>University of Miami men’s basketball team, staff and supporters gathered at the BankUnitedCenter on Tuesday evening to celebrate the 2007-08 season at the team’s postseason banquet.<?xml:namespace prefix=”o” ns=”urn:schemas-microsoft-com:office:office”?>

“People ask me what I’ll remember most about this season,” said head Miami coach Frank Haith, who posted his winningest season with 23 victories in his fourth year at the helm. “Of course the Duke win was special, but I know that I will always remember that first NCAA Tournament win, and having the opportunity to get all of the guys on the floor. No one can ever take that away from them.”

Morton, a former Hurricane basketball player himself, wrapped up his first season as an assistant coach at his alma mater and took a moment to thank the current Hurricanes for their hard work that resulted in an NCAA Tournament berth.

In addition to being recognized as the first Miami men’s basketball player to earn First Team All-ACC honors, Jack McClinton also picked up team recognition for Most Valuable Player, Best Free Throw Percentage and Best Three-Point Field Goal Percentage, as well as being named the co-recipient alongside Lance Hurdle for Most Assists. Hurdle was also honored with the Hustlin’ Cane Award.

King, Stratton and Jimmy Graham also picked up a pair of team awards, with King earning Most Blocked Shots and Chairman of the Boards accolades, while Graham was tabbed The Man in “Charge” and Outstanding Defender. Stratton was honored with the Outstanding Student-Athlete Award and shared the Ultimate Teammate Award with Glover.

Other Hurricanes to be honored included James Dews as the Most Improved Player and Fabio Nass as the Unsung Hero.

The evening began with an impromptu performance by McClinton and Dews, singing Happy Birthday to teammate Hurdle, while Eddie Rios added some dance moves.