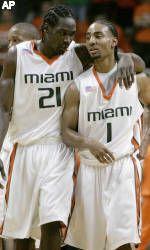 Hansbrough scored 27 of his season-high 35 points after halftime, Lawson scored 15 of his 23 points in the opening 20 minutes, and the fifth-ranked Tar Heels got back to their winning ways by beating the Hurricanes 98-82 on Wednesday night.

Wayne Ellington added 12 points for North Carolina (19-1, 4-1 Atlantic Coast Conference), which lost its No. 1 ranking after an 82-80 home loss to Maryland on Saturday. But losing rarely becomes a Tar Heel trend: Excluding season-ending defeats, North Carolina is now 24-4 after a loss in the Roy Williams era.

The Hurricanes, who fell to 9-1 at home this season, also got 17 points from Raymond Hicks and 11 from Jack McClinton.

Miami’s home floor was raucous early, with no shortage of star power on hand.

Dwyane Wade of the Miami Heat sat near the Hurricanes’ bench, and Heat players Dorell Wright — McClinton’s former prep-school teammate — and Jason Williams sat in the front row along a sideline.

Williams even twirled an orange pom-pom most of the game, but the Tar Heels — who improved to 8-0 on the road — weren’t deterred.

Hansbrough made consecutive jumpers early in the second half to push Carolina’s lead to 59-48, then its largest.

And whenever Miami seemed poised to make a run, Hansbrough usually had an answer.

His three-point play with 7:44 left put the Tar Heels up 74-62 and, after McClinton hit a 3-pointer to breathe some life back into the Miami side, Hansbrough slammed home a missed Lawson layup to silence the building once again.