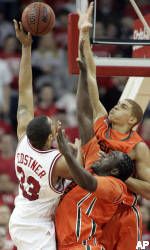 With the score tied in the waning seconds of overtime, Grant made sure he stayed with his man.

“He had been killing us the whole second half, and I was thinking I have to get to him before he makes a haymaker,” Grant said. “I just happened to be right there.”

Right there in position to give the Wolfpack a victory.

After Anthony King made one of two free throws to give Miami a 77-75 lead with 15.3 seconds remaining in the extra session, Grant drove the basket on the other end to try to tie it. His layup in traffic bounced off the rim, but J.J. Hickson was there for the tip-in.

Just as the home crowd was celebrating the possibility of a second OT, Grant jumped in front of King’s pass and immediately put the ball in the basket.

“I thought I was dreaming at first,” said Hickson, who was headed back on defense with his back to the play. “I just heard the crowd cheering. I thought maybe they had called a foul or something.”

No such luck for the Hurricanes. McClinton’s desperation heave from half-court bounced harmlessly off the backboard, helping N.C. State (12-5, 1-2 Atlantic Coast Conference) avoid a disastrous 0-3 start in the conference.

McClinton hardly could be blamed for the loss, scoring 24 of his 26 points after halftime on his birthday to bring Miami (14-3, 1-2) back from double-figure deficit. King and Raymond Hicks each added 13 points.

“I thought it was a real hard-fought game, a tough game,” Miami coach Frank Haith said. “Our kids really played their hearts out in the second half. It’s always tough on the road.”

Grant finished with 24 points and Brandon Costner had 16 points after going scoreless in the Wolfpack’s loss to Clemson earlier in the week.

“We just got tired of losing,” Hickson said. “We had to step up individually and as a team.”

Each team had a chance to go ahead during the final seconds of regulation after Grant tied it at 72 with a three-point play. McClinton missed a contested jumper and King couldn’t convert his offensive rebound, giving the Wolfpack the final try.

They ran a play for Courtney Fells, who was berated just minutes earlier by coach Sidney Lowe for his porous defense on McClinton, and he got an open look. But his shot from well behind the 3-point arc bounced off the rim to force overtime.

The Wolfpack faithful, which had booed the home team off the court at halftime of its most recent game at the RBC Center, had much to cheer in the opening half of this one. With Costner leading a balanced attack — four players had at least six points — N.C. State played from ahead nearly the entire way.

In fact, the only moment of displeasure was a sarcastic one, when it was announced that a Barry Manilow concert scheduled for Sunday had been postponed due the winter storm that hit much of the Southeast.

Costner hit a 3-pointer to open the second half to give N.C. State a 12-point lead, and the margin still was 11 a few minutes later after another 3 from Javier Gonzalez. That’s when Miami finally got going.

Most of the damage was done within a few feet of the basket, with Jimmy Graham sparking a 10-0 run with a couple of easy layins against some weak interior defense from the Wolfpack. When McClinton finished off a fast break with a high-arching one-hander, it was 46-45.

“We wanted to get the ball inside against them,” Haith said. “That was our game plan. I thought our inside guys did a really good job of attacking their bigs and getting the ball into the post.”

Later, following a brief scrum when Miami’s Dwayne Collins committed a hard foul on N.C. State freshman Tracy Smith, the Hurricanes took their first lead since early in the first half on McClinton’s jumper from behind the line. That was the first of nine lead changes down the stretch.

“Today’s game was about heart and toughness,” Lowe said. “We knew they played physical, and I told our guys that the most physical team wins the game. We were able to throw the last punch and that was great.”