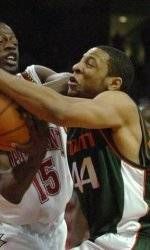 COLLEGE PARK, Md. (AP) – Dwayne Collins had 14 points and 12 rebounds, and Miami overcame its own shortcomings by limiting Maryland to 22 percent shooting and controlling the boards in a 63-58 victory Wednesday night.

Miami (9-8, 2-1 Atlantic Coast Conference) made only 19 of 61 shots (31 percent) from the floor, including 3-for-15 from 3-point range, and committed 15 turnovers. But the Hurricanes held Maryland to one field goal over the final 9 minutes, 36 seconds to end the Terrapins’ five-game winning streak.

Anthony Harris scored 15 points and Jack McClinton had 12 for Miami, which outrebounded Maryland 55-41 and went 14-for-16 at the foul line over the final 1:19.

Mike Jones led Maryland (14-3, 0-2) with 17 points. D.J. Strawberry, the Terrapins’ leading scorer, went 1-for-8 from the field and finished with seven points – all in the final three minutes.

Maryland trailed only 30-25 early in the second half before finally giving the sellout crowd reason to cheer.

Two free throws by Ekene Ibekwe and a 15-foot jumper by Will Bowers got the Terrapins within one, and a 3-pointer by James Gist tied it. Then, after a basket by Miami, freshman Eric Hayes hit a 3-pointer to Maryland its first lead since 19-17.

It didn’t last long. Two foul shots by McClinton and layups by Brian Asbury and Harris put the Hurricanes up 40-35 with 9:55 left.

Miami went ahead 43-37 before the Terrapins used six successive free throws to draw even with 5 minutes to go.

The Hurricanes answered with two foul shots by Asbury and a follow-shot by Collins, then held off Maryland with a fine performance at the line.

Miami held Maryland to 21 percent shooting from the floor and outrebounded the Terrapins 33-16 in taking a 26-21 halftime lead.

Jones scored half of Maryland’s first 14 points, then hit his third 3-pointer for a 17-12 lead. The Hurricanes, meanwhile, missed 10 straight field-goal tries before a layup by Raymond Hicks ended a scoring drought of nearly seven minutes.

Ibekwe then made two foul shots before Collins scored eight points in a 13-1 run that put the Hurricanes up 26-20.