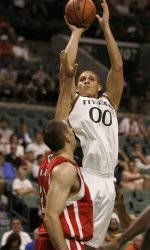 SUNRISE, Fla. (AP) -Senior Marcus Perry scored a career-high 25 points, and Nebraska ran off 13 consecutive points in the second half to beat Miami 82-67 on Saturday in the Orange Bowl Classic.

Brian Asbury tied a career high with 19 points and Jimmy Graham added a career-high 13 for the Hurricanes (7-7), who lost their third straight despite shooting 51 percent from the field.

Miami had four 3-pointers, just one in the second half.

The Hurricanes played without leading scorer Jack McClinton, who is expected to miss at least two games with a left knee injury. The Cornhuskers were without Ryan Anderson, their second-leading scorer, who strained his lower left leg in practice Thursday.

Perry started for Anderson and surpassed his season average of 6.0 points in the first half.

Aleks Maric finished with 18 points and eight rebounds for Nebraska, while reserve Paul Velander added 12 points, all on 3-pointers, and Jamel White scored 10.

Asbury’s basket put the Hurricanes ahead for the first time, 26-25. Perry hit a 3-pointer in the final second of the first half to regain the lead for Nebraska, 38-36.