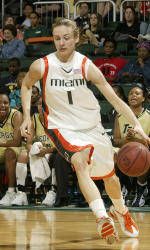 CORAL GABLES, Fla. – The University of Miami women’s basketball team will officially open the 2005-06 season Saturday with their first full team practice slated for 1-4 p.m. at the UM Convocation Center.

Two years after moving into a new home facility in the Convocation Center and one season removed from their inaugural season in the tradition-rich Atlantic Coast Conference, the Miami women’s basketball team will once again usher in a season of “new” in 2005-06 as first-year head coach Katie Meier embarks on her introductory season at the helm of the UM program.

Meier, who was named Miami’s seventh head coach in the program’s 33-year history in April of this year, takes over a Hurricane team that has the potential to surpass all expectations behind the play of a solid corps of experienced players, including National Player of the Year and All-America candidate senior Tamara James. UM will also benefit from the return of fifth-year senior Melissa Knight who returns this season after sitting out the entire 2004-05 campaign rehabbing from an ACL injury.

With Miami’s returning players paired with an extremely talented group of underclassmen, the Hurricanes could make the newest chapter in the school record books an impressive one as they embark on their second season in the ACC, which is arguably the best women’s basketball conference in the nation.

First-Year Head Coach Katie Meier
In April of 2005, the University of Miami women’s basketball program took the next step in establishing its self as one of the nation’s elite with the announcement of Katie Meier as the newest head coach. Meier came to UM by way of Charlotte, where she spent four seasons at the helm of the lady 49ers.

As only the fifth head coach in Charlotte history, Meier could solely be responsible for bringing the 49er women’s basketball program into national prominence. Prior to her appointment as head coach at Charlotte in 2001, the 49ers had only one previous postseason appearance – a WNIT birth in 1990. During her four-year tenure at Charlotte, Meier led the 49ers to three postseason births – one NCAA Tournament appearance (2003) and two WNIT appearances (2004, 2005) – and a combined overall record of 76-45 (.628).

Prior to Charlotte, Meier spent seven seasons at Tulane University, serving as an associate head coach from 1999-01 and an assistant coach on the Green Wave staff from 1994-99. As a member of the Tulane coaching staff, Meier helped the Green Wave to an overall record of 164-52 (.759) in seven seasons, including the highest ranking in school history (13th by the Associated Press) in 2000 and a school-record 27 wins the same season. During her time at Tulane, Meier and the Green Wave also saw an impressive seven-year run at the NCAA Tournament.

Meier’s success as a coach is a direct reflection on her playing career as a stand-out at Duke University. A four-year letterwinner for the Blue Devils from 1986-90, Meier’s name is scattered throughout the Duke record books.

Meier wasted no time making her mark at Duke, earning ACC Rookie of the Year and Basketball Yearbook Freshman All-America honors 1986. Meier injured her knee during her in 1988 during her junior season and ultimately missed the entire 1989 campaign while recovering.

Meier returned to Duke for her senior season in 1990 without missing a beat, earning Kodak/WBCA District 2 All-America and All-ACC First Team accolades while being named the Blue Devils’ most valuable player.

In 2002 Meier was honored by Duke for her efforts as a player when she was named to the inaugural induction class in the Blue Devils’ Hall of Honor. That same year Meier was named to the Atlantic Coast Conference’s 50th Anniversary Team.

Meier brings to Miami an impressive background in the Atlantic Coast Conference along with the desire and the knowledge to succeed and has all the potential to raise the bar at UM.

The Hurricane Backcourt
Meier’s biggest void to fill in the UM starting lineup will be the one left by the graduation of three-year starting point guard Yalonda McCormick, who averaged 12.6 points per game while playing in an average of 36 minutes per game last season.

Sophomore Marianne Curtis returns as the only true point guard to see actual playing time in a Miami uniform. Last season she averaged just over seven minutes per game in 24 games, but made tremendous strides in the off-season to prepare herself for a bigger role.

Curtis will compete with junior college transfer Renee Taylor for the starting nod as the UM point guard. Taylor, a 5-2 spark from Harlem, N.Y., led the NJCAA in scoring last season, posting 30.1 points per game for Monroe Community College and has the athletic ability and speed to compete with the ACC’s best.

Sophomore Albrey Grimsley returns for her second season as one of three returning starters from last season. Grimsley finished the season ranked third on the team with 6.0 points per game and should look to increase her production with more experience.

Senior guard Katie Hayek, who has served primarily as a role player for the past three season, enters her final campaign more than ready to vastly increase her minutes after ending last season with glimpses of what she could do as a full-time starter.

The Hurricane backcourt will also look to the play of sophomore guard Selena Eskinazi-Budge and freshman LaToya Cunningham, who hails from Vallejo, Calif.

Down Low
Up front, the Hurricane lineup will feature one of the nation’s top talents in senior forward Tamara James. James, a 2005 All-ACC and All-America Honorable Mention selection, enters the season ranked third all-time at UM in career scoring average (20.0 ppg). She sits at fourth place all-time with 1,761 points and is on pace to challenge Maria Rivera’s mark of 2,358 for tops all-time at Miami.

James led the Hurricanes and the ACC in scoring last season with 22.3 points per game and topped the UM roster with 6.9 rebounds per game.

UM welcomes the return of Melissa Knight, who average 9.3 points and 4.4 rebounds per game as a starter two seasons ago, after missing the entire 2004-05 season with an ACL injury.

Tatjana Marincic heads into her senior season following a 2004-05 season that saw her average 4.5 points per game and looks to steadily increase her production, a trend that proven to be true in each of her previous three season at Miami.

Sophomore Lamese James, who saw playing time in 17 of 29 games last season, joins Marincic and Knight in the forward-guard position.

On the block, 6-1 junior Imani Dhahabu returns following her first season as a full-time starter in which she averaged 5.6 points and 5.0 rebounds per game.

The Schedule
Highlighted by a slate that includes 14 postseason participants from a year ago, including 12 NCAA Tournament teams, UM will play host to 17 home games at the Convocation Center this season while hosting a pair of holiday tournaments – the UM Thanksgiving Tournament (Nov. 25-26) and the Hurricane Holiday Classic (Dec. 28-29).

Season ticket packages for the 2005-06 season start at just $75 dollars and include admission to all 17 home games. Fans can also purchase the Family Plan and receive admission to all home games for two adults and three children for just $100 dollars.