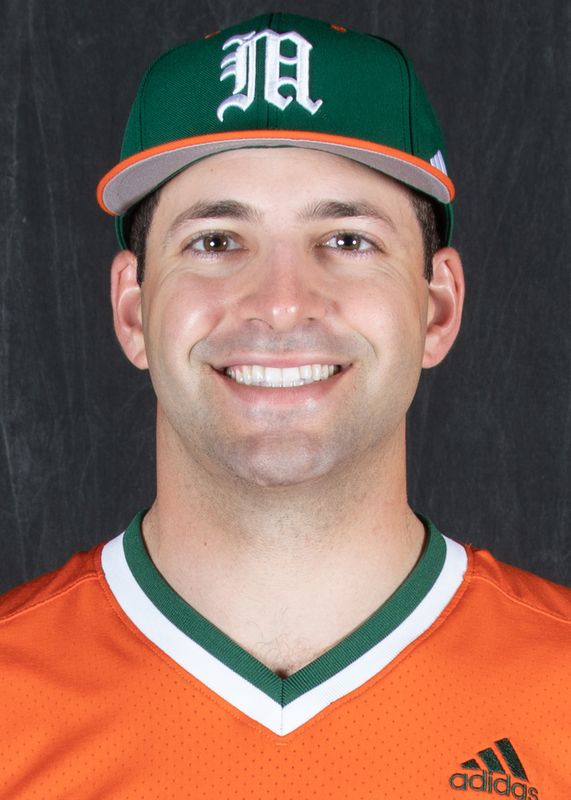 *Graduate Student (2021): Missed most of the season due to injury…Played in eight games, making seven relief appearances out of the bullpen and three plate apperances…Earned the win in his Miami debut, allowing one run over two innings while walking and scoring a run as a hitter at preseason No. 1 Florida (Feb. 20)…Tossed a scoreless inning of relief to help Miami take series at preseason No. 1 Florida (Feb. 21)…Struck out a batter in a scoreless inning vs. Virginia Tech (Feb. 27)…Retired both batters he faced in win at NC State (Mar. 7)…Saw final plate appearance in win over Wake Forest (Mar. 12)…Returned to action with an inning of relief against Georgia Tech (May 14)…Made NCAA tournament debut striking out one batter in 1.0 inning of work against USF (June 5).

*Redshirt Senior (2020 – USC): Started 10 of the 13 games he appeared in during the pandemic shortened 2020 season…Earned Collegiate Baseball Newspaper All-America second-team honors for his work both on the mound and at the plate…Slashed .410/.500/.564, leading the Trojans and finishing 5th in the Pac-12 in batting average…Drove in eight runs and scored five, hitting four doubles and one triple…Served as the Trojans’ closer, recording three saves, good for second-most in the Pac-12, and a 0.00 ERA…Did not allow an earned run in his six relief appearances, striking out eight batters and walking one in 6.1 innings pitched…Picked up saves on back-to-back days against No. 22 TCU (3/6) and No. 2 Vanderbilt (3/7) (both 2-1 wins)…Posted five multi-hit games, including going 4-for-4 against Cal State Fullerton (2/25) with three doubles and three RBI.

True Freshman (2016 – Yale): Made 44 appearances and 40 starts at first base for the Bulldogs…Hit .245 with 15 runs, 26 hits, four doubles, one triple, two home runs, and 11 RBI…Recorded two errors on 269 total chances and tied for a team-best 22 double plays…Went 2-for-2 with one home run and two RBI against Hartford on March 30…Appeared in 12 games and made eight starts from the mound…Had an ERA of 7.51 in 38.1 innings of work…Had a ball to strikeout ratio of 26-18…Ended his rookie season with a record of 1-4…Recorded a season-high six strikeouts against Wesleyan on April 20.

High School: Played baseball, football and basketball at Belmont Hill HS, including three varsity seasons on the baseball team…Recorded a 0.73 ERA in 48 innings on the mound in his senior season…Pitched first perfect game in school history…Played defensive end in football for three seasons and forward in basketball for one season…Was the Independent School League MVP in 2015…Earned All-League ISL in 2013, 2014, and 2015…Named to Prep Baseball Report All-Massachusetts first team and Boston Globe Prep All-Scholastic in 2015…Team was ISL Champions in 2013 and 2014…High Honors all four years of high school.

Personal: Son of David Wanger and Gwen Kane-Wanger…Has two siblings: sister, Emily, and brother, Danny…Father, David, played baseball at Harvard, mother, Gwen, played field hockey and lacrosse at Brown, sister, Emily, played basketball at Yale and brother, Danny, played football at Bowdoin…Earned a master’s in entrepreneurship and innovation from USC in 2020… Graduated from Yale in May of 2019 with a degree in economics and environmental engineering – energy studies scholar (concentration)…Helped Israel become the first team to qualify for the 2020 Olympics at the Europe/Africa qualifying tournament in Italy…Recorded three hits, scored four runs and drove in three more for the tournament, and threw 4.1 scoreless innings on the mound, giving up one hit and one walk, while striking out five batters.