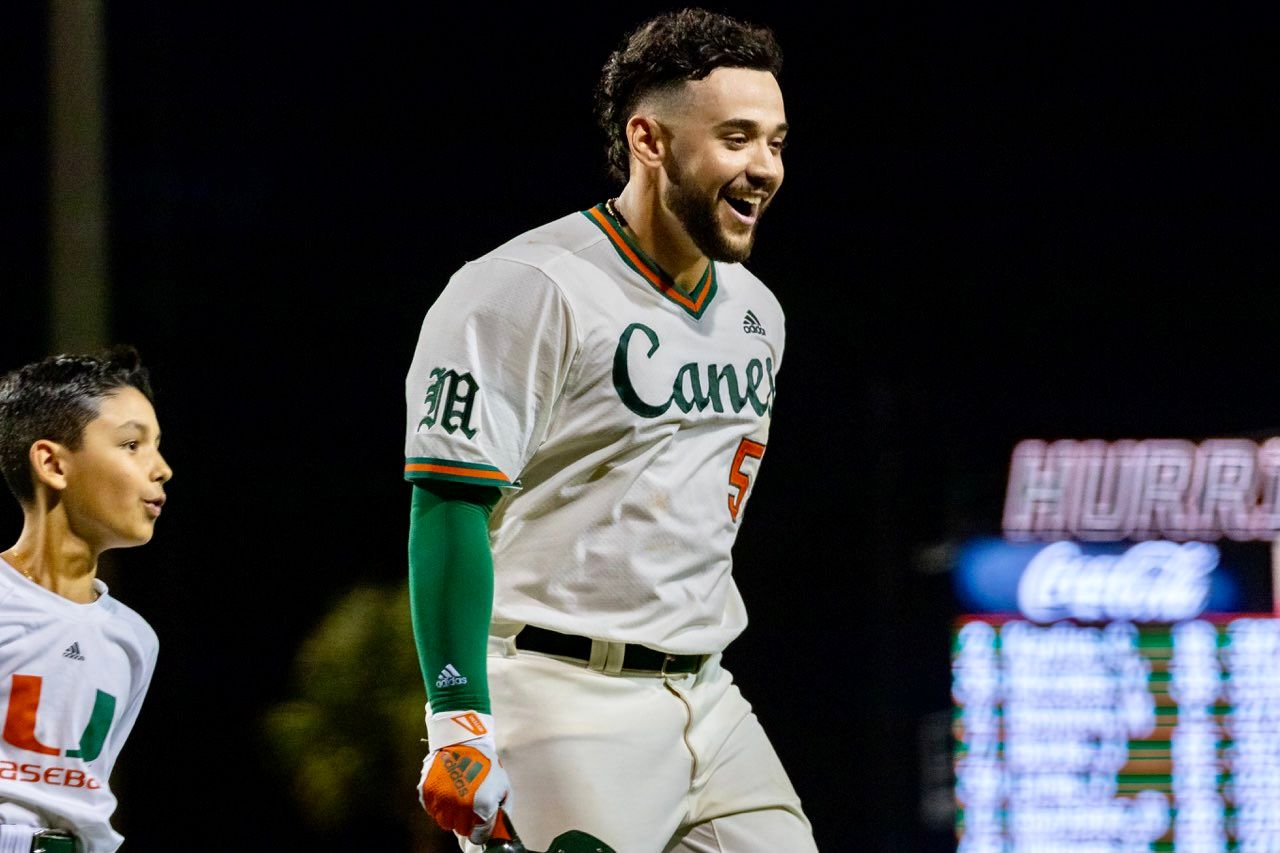 Gutierrez’s Career Night Guides No. 9 Miami to Win Over No. 14 Notre Dame

Before the Miami Hurricanes’ series opener against Notre Dame, the freshman outfielder showed some tender, love and care for his black and yellow DeMarini.

Gutierrez launched two homers and drove in five runs, leading No. 9 Miami to a 6-4 victory over No. 14 Notre Dame Thursday evening at Alex Rodriguez Park at Mark Light Field.

“I don’t really care about my stats,” Gutierrez said. “Whatever helps the team win and puts us on top is what really matters. I’ve been struggling a bit, but I stuck to the same approach. I was trying to find something to drive in the air. He hung two breaking balls and I just put a barrel on it.”

The Miami native smacked a go-ahead three-run jack in the fifth before rocketing a game-winning two-run shot in the seventh to help the Hurricanes (38-15, 19-9 ACC) snap a three-game skid.

Gutierrez’s second career blast provided Miami with a 4-1 cushion, while his 406-foot bomb in the seventh padded the Hurricanes’ advantage, 6-1.

“Every game, someone new is stepping up and doing something huge,” Miami starter Carson Palmquist said. “Tonight, it was Gaby. No one deserves it more than Gaby. He’s a great kid and a great teammate.” 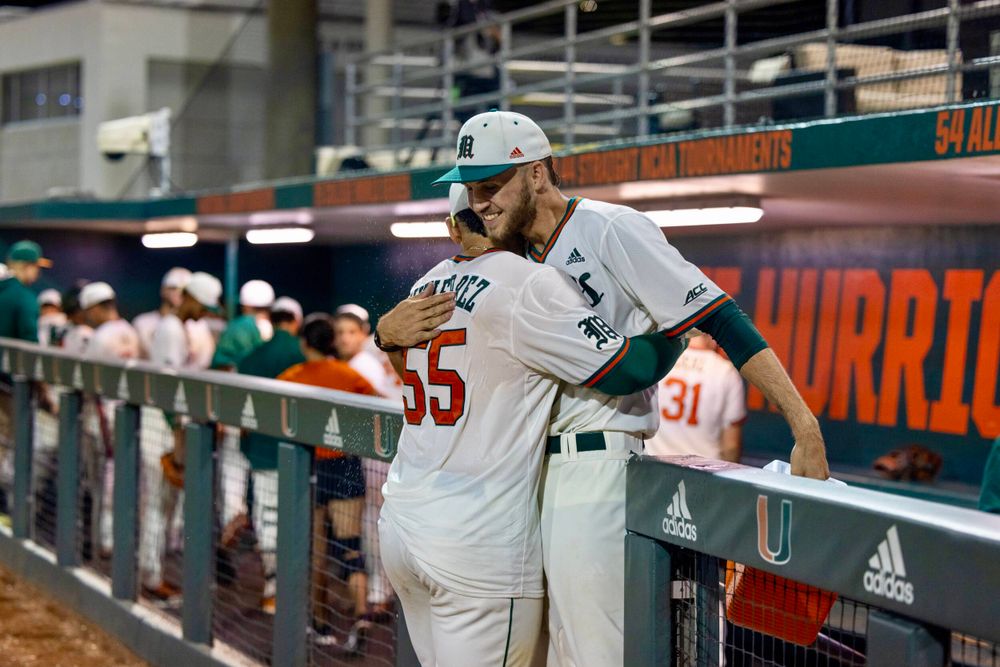 The southpaw retired the first nine batters he faced, striking out three in as many frames. With his third punchout, Palmquist became the first Hurricane since Evan McKendry in 2018 to strike out 100 batters in a season.

“Anytime you get that many strikeouts, you’re in a special group,” Miami head coach Gino DiMare said. “We’ve had a number of great pitchers over the years, but he’s definitely one of a kind. I don’t recall anybody being quite like him. He’s very unique because of his delivery. Everything goes off his fastball, in and out. The changeup was very effective and has been lately. I think that’s been the secret to his success of late and why he’s pitched so well.”

Palmquist (9-3) surrendered only one run on one hit and finished with eight strikeouts.

“He’s crushing it,” sophomore third baseman Yohandy Morales said. “He’s been really aggressive going after hitters, not falling behind. He’s been pitching great for us all year. We can’t ask for anything more than that.”

Notre Dame left fielder Ryan Cole hit a leadoff home run off of Palmquist in the fourth, but the Hurricanes’ offense responded immediately.

Morales crushed his team-best 13th round-tripper to even the score in the fourth, setting the stage for Gutierrez’s heroics.

“The three home runs did all the damage,” DiMare said. “Of course, the two are very, very big. The last one, that’s the difference-maker. So, I’m very happy with this first win of the series.”

Despite the Hurricanes leading in the ninth, 6-1, the Irish didn’t go down quietly.

Cole clobbered his second dinger of the night, pulling the visitors within two, but Miami right-hander Andrew Walters sealed the victory.

Meanwhile, Irish hurler John Michael Bertrand (7-2), who entered Thursday second in the ACC with a 2.37 ERA, was tagged with the loss, after allowing four runs on four hits over 6 1/3 innings.

“It was a huge win for us, a big momentum booster playing against a really good Notre Dame team,” Palmquist said. “We know what we can do. We just need to get back into the swing of things and this is a good way to start to push us back in the right direction.”

Miami will look to secure the series against the Fighting Irish Friday at Mark Light Field. First pitch is slated for 7 p.m.