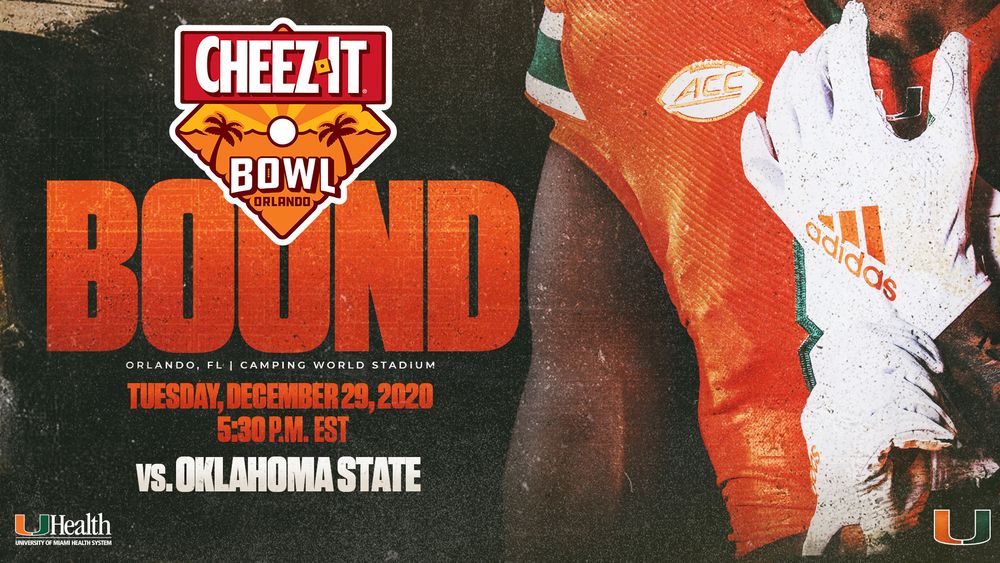 CORAL GABLES, Fla. – The University of Miami football program announced Sunday that it has accepted a bid to the 2020 Cheez-It Bowl and will take on Oklahoma State at Camping World Stadium in Orlando.

“We are looking forward to participating in the 2020 Cheez-It Bowl,” Director of Athletics Blake James said. “Florida Citrus Sports is a first-class bowl host. Our student-athletes and coaches have faced unprecedented challenges throughout this entire year and I’m excited they will have the opportunity to conclude an outstanding season in Orlando.”

Miami’s appearance in the 2020 Cheez-It Bowl marks the 44th time in school history the Hurricanes have competed in a bowl game and eighth straight year in which the Hurricanes will compete in a postseason game; Miami owns a 20-23 overall record in 43 previous bowl games.

Miami’s matchup with #21/RV Oklahoma State (7-3, 6-3 Big 12) represents the second all-time meeting between the two schools and the first head-to-head contest since 1991; UM topped the Cowboys, 40-3, in the only other matchup.

“We are looking forward to facing Oklahoma State in the 2020 Cheez-It Bowl,” head coach Manny Diaz said. “I’m proud of what our players and coaches have accomplished this season and I’m excited we have an opportunity to secure a bowl win for this outstanding group of Hurricanes.”

IN CASE YOU MISSED IT