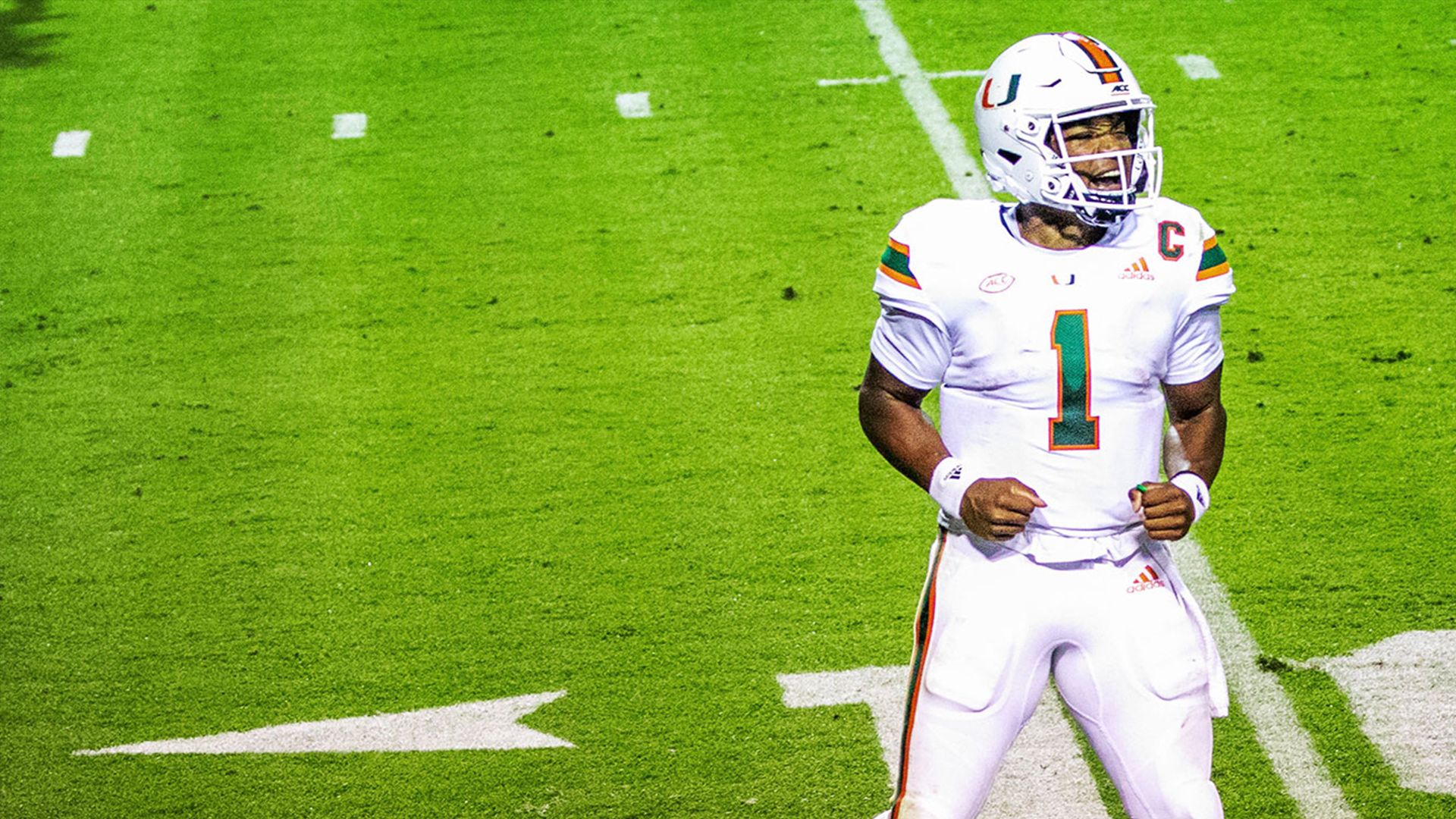 "Home Away From Home"

CORAL GABLES, Fla. – It was a decision that weighed on him for weeks, maybe even longer.

He spoke to teammates and coaches. Sought guidance from the NFL’s Draft Advisory Committee. There were countless conversations with his family and he tried to imagine what his late father – the person who introduced him to the game – would advise him to do.

Some days, D’Eriq King felt more than ready to take the next step in his football journey, declare for the draft and begin his professional career. Other days, he couldn’t deny that coming back to Miami and again leading the Hurricanes’ offense was the best choice for him.

There was no single factor that swayed him to ultimately decide he wanted to remain a Hurricane, but on Saturday morning, the redshirt senior quarterback took to social media with a simple message tucked into a video featuring some of his Miami highlights: “Let’s run it back!”

Head coach Manny Diaz quickly shared the news. So, too, did offensive coordinator Rhett Lashlee. Across college football, King’s message resonated: he still had work to do as a Hurricane.

“Miami is a special place and I want to see it get back to where it’s been,” King said later Saturday. “I love Coach Diaz and Coach Lashlee to death. I think they’re two great guys, two great coaches. I love my teammates. I think it was a win-win. When I decided to come back, it was me and my family’s decision, but knowing that I have the coaching staff and all my teammates behind me, that was the biggest thing for me. It’s a really, really special place. Being here one year and not getting the full effect on it, I wanted to run it back and see how far we can go, see if we can take the next step to make this place really great.”

There’s no doubt football was at the forefront in King’s decision-making process.

Though he has completed 64 percent of his passes, thrown for 2,573 yards and 22 touchdowns while rushing for another 520 yards and four scores this season, there are things in his game King still wants to improve on before playing on football’s biggest stage.

And he believes another year in Lashlee’s system will help him grow and give him the kind of continuity he hasn’t experienced to this point in his college career. 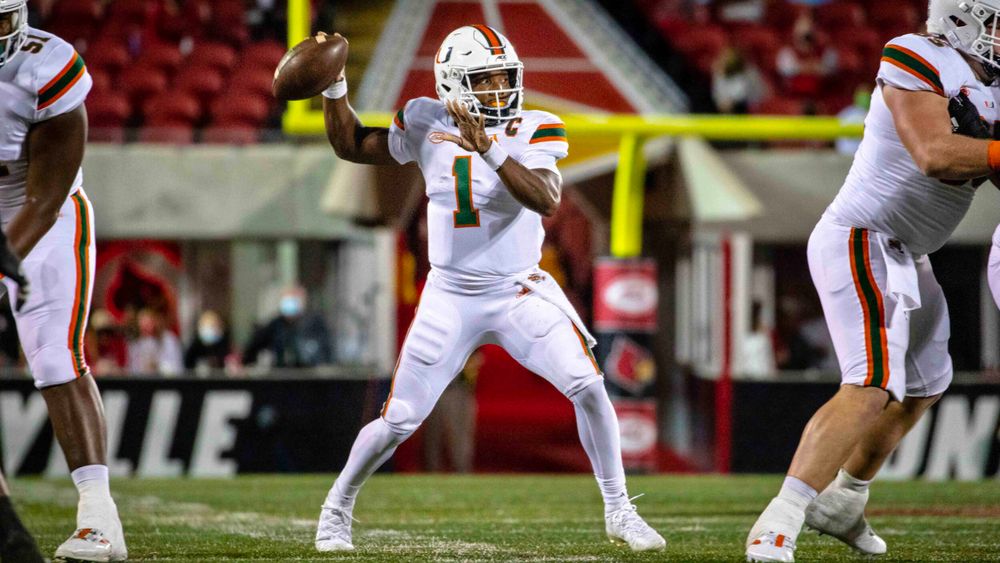 But, there were other factors at play, too.

When King – a graduate transfer from Houston – arrived at Miami in January, it seemed as if everything was falling into place.

He had a fresh start at a program that welcomed his leadership and experience. He and Lashlee connected almost immediately, with King believing he could thrive in his new coordinator’s high-tempo, high-scoring offense. And his work ethic quickly earned him the respect of his new teammates, with Hurricanes on both sides of the ball appreciating King’s approach.

Then, mere weeks after leaving his hometown for the first time, news he couldn’t have imagined.

Eric King – his father, his first coach, one of his best friends – had died.

The loss devastated the tight-knit King family, which was already doing its best to rally around King’s mother Cassandra, who was battling breast cancer at the time.

But after his first four practices as a Hurricane, another unexpected challenge.

The COVID-19 pandemic brought the world to a virtual standstill. Miami’s campus closed. Spring practice ended. Shelter-at-home orders became the norm and for months, there was no guarantee a college football season would even be played.

By the time spring shifted to late summer, there was hope King and the Hurricanes would be on the field after all, but what awaited them was a season unlike any other.

A series of health and safety protocols to prevent the spread of Covid were implemented at Miami and beyond. How the Hurricanes practiced and prepared for games changed.

The kind of offseason work King and his teammates would normally have was non-existent.

When King finally took the field at Hard Rock Stadium for his first game as a Hurricane in September, there was a handful of socially-distanced fans scattered in the stands. Road games were unnervingly quiet. Eventually, Miami’s season even came to a complete stop to give players and coaches time to get healthy. 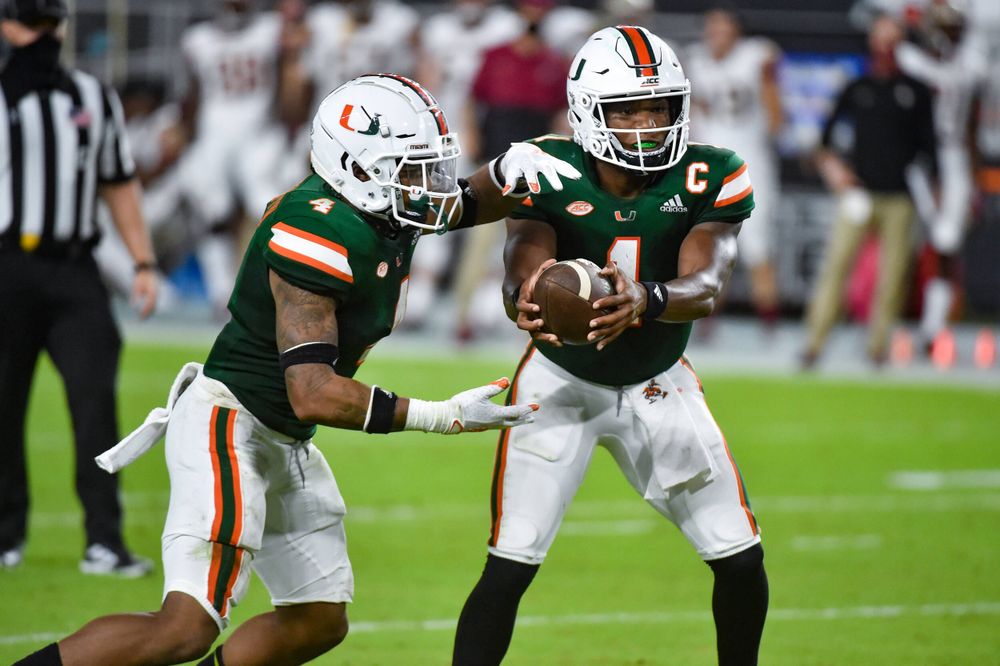 Though the Hurricanes won eight of their first nine games and King put up impressive numbers despite the challenges they faced, this was hardly the season the quarterback envisioned having in his final year as a college football player.

Now, the opportunity to do it all over again – and catch his breath in the process – is something King doesn’t take for granted.

“It means a lot to have some stability,” King said. “I haven’t played with the same coach two years in a row since I’ve been in college. Knowing he’s coming back, knowing what the offense could be, knowing everything in and out and being comfortable, that’s something I really wanted. When we talked about it, that was a big reason for me to come back.”

Understandably, his teammates and coaches couldn’t be happier to have King back.

“It means a lot to our program. D’Eriq King has now chosen us twice,” Diaz said. “He certainly had a lot of options [where] he could have gone last year and I’m pretty certain that whatever school he would have chosen this time last year, they would have had a really good season. We know how much he’s meant to our season this year and the fact that he’s chosen us again, like I said, to me means he believes we can win here. He believes that we’re doing the right things here and he wants to be a part of that. How cool is that for everybody in this program and everybody associated with UM football?”

Added Lashlee, “D’Eriq’s a special person. He’s got that incredible ability to command the respect of everyone around him just by how he works and how he carries himself. He just brings everybody together. He’s hard on himself. He’s always trying to be the best he can be. … He puts a lot of pressure on himself in a good way. A lot of credit goes to his mom and his dad in how he was raised. He was raised right, to always work hard, to enjoy the process, to enjoy working to do his best. He’s just a special person. D’Eriq is everything that is right about college football and he deserves the opportunity to get everything he can get because he does things the right way.”

For King, right now, doing things the right way means helping the Hurricanes get a win Tuesday in their Cheez-It Bowl matchup against Oklahoma State.

After that, it will be time to start preparing for his final college season, one that will begin with a test against powerhouse Alabama and one he hopes ends with a title and memories he won’t forget any time soon.

“This is my home away from home. Being out here, I have 100 brothers and we all want the same thing. We all ride for each other,” King said. “Now, we want to focus on this game and hopefully, it jumps us forward into next year and gives us some momentum to start next season off right.”