Rushing to Help Those in Need

CORAL GABLES, Fla. – His approach to every challenge has always been the same.

Whether he’s had to learn a new playbook, prepare for an opponent or go through the rehabilitation process after a painful injury, Robert Burns has always tried to put his head down and work as hard as possible – a trait teammates, coaches and friends alike have long appreciated.

That work ethic was part of the reason Burns seemed like a natural fit when one of his best friends wanted to figure out a way to help feed needy families in South Florida.

During his freshman year at Syracuse in 2016, quarterback Mo Hasan was taken aback by how much food was wasted on a day-to-day basis in on-campus dining halls. And he couldn’t help but wonder if that food could be used to help others instead.

He began doing a bit of research, reached out to Burns – a former high school teammate at Miami’s Gulliver Prep – and little by little, the idea for Second Spoon began taking shape.

Their goal was simple: turn wasted food into healthy meals for those in need.

Together, the two helped Second Spoon grow into a 501c3-registered organization that recycles nutritious surplus food and delivers meals to hungry families in Miami, Nashville and Los Angeles with help from student-athletes at the University of Miami, Vanderbilt and USC.

“I would say [Burns] is more than a friend. He’s really like a brother to me,” said Hasan, now a redshirt senior quarterback at USC. “As soon as he got to Gulliver, we started training a lot together and the first thing I noticed was his work ethic. I was often one of the guys who would be getting extra work, extra lifts after practice and I would notice he would stay along with me. Our friendship started like that. We continued getting that extra work and that turned into workouts outside practice and hanging out outside the field, talking about things not related to football. … He has such a great heart. He’s a great person. I knew he was right for the job.”

Before Second Spoon could expand its mission across a series of college campuses, Hasan – who transferred to Vanderbilt after his time at Syracuse – and Burns had to figure out how to bring their vision to life.

They knew they wanted to bring the food they collected directly to those in need and it seemed the easiest way to do that would be with the help of a food truck.

After getting clearance from their respective compliance departments and filing the necessary paperwork to have Second Spoon recognized as a charitable organization, Hasan and Burns began raising the money to buy the truck they knew would help them with their mission.

“What struck me was the selflessness of it,” Jackson said. “I think sometimes when you think about Division I student-athletes, I don’t know if people understand how much of a time commitment that is. It’s significant. And then you have a young man who walks into your office and says ‘After classes, after studying, after practice, after film, after treatment, I still want to do this and give back to my community,’ you want to help him. … It was an incredible act of heart and putting others first. Even when they were tired or exhausted, they wanted to take three, four hours to go give back to Miami’s most vulnerable population. I just thought it was incredible.”

Said Baron, “At first, I was like, ‘Wow. This is a lot for a student-athlete to do and there’s a lot of different pieces to it, like getting the truck, getting the food, getting it all down there. There’s a lot of little parts that go into the big picture. … But when he told me about it, I said, ‘Okay, let’s make it work. I love this idea you have. I love how you want to help people.’”

But after their initial round of fundraising was completed, Hasan and Burns realized they didn’t have enough money to buy the truck they wanted.

Hasan began poring through online classifieds when he landed on a potential option. Could Second Spoon buy an old delivery truck and repurpose it into what they needed?

That became the plan. The money they had raised got them a “relatively cheap” old FedEx truck that Hasan and Burns had wrapped and painted. A service window was created on the side. They added refrigeration. A generator.

Before long, it was time to move on to the next step and Burns couldn’t help but credit his and Hasan’s experience as football players with helping them stay focused, no matter what challenges they faced.

“I’d like to credit football with a lot of the skills I’ve learned, as far as leadership and teamwork. Being on the field, especially offensive football, you’re forced to rely on everyone around you. Bringing that collaboration mindset to Second Spoon was everything. It translated very well. Football taught me leadership, teamwork, time management, things like that,” Burns said. “Honestly, I don’t know if it’s just the sport mentality or what, but it was like, ‘Okay, wow. We did this,’” Burns said. “We embraced it, we celebrated it but then it was like, ‘What’s the next step? How can we help people?’”

The duo partnered with local Miami restaurants to collect any food they wanted to donate. They partnered, too, with St. Stephen’s Episcopal School in Coconut Grove and Burns asked his fellow student-athletes at Miami for their help.

Before long, their truck – emblazoned with the Second Spoon logo and the Miami skyline – began making its first delivery runs into Miami’s Overtown neighborhood where it didn’t take long for Burns, Hasan and their fellow volunteers to see the impact they could have.

“Giving back to the community has always been something I watched my mom and grandparents do,” Burns said. “I remember when I first got to UM, doing community service and going out to the Overtown Youth Center and seeing people who looked like they could use a hand. To be able to go back and give that to people, it’s an amazing feeling. An amazing feeling. I know we’re helping them and they feel great. We feel great, too. It’s a great feeling to know you’re helping someone.”

More than a few of Burns’ Miami teammates – including fullback Michael Parrott, wide receiver Elias Lugo-Fagundo, linebacker Zach McCloud, tight end Larry Hodges, offensive lineman Navaughn Donaldson and defensive end Jaelan Phillips – have taken part in some of the delivery runs. So, too, have student-athletes from other Hurricanes teams.

In fact, Baron has noticed whenever she asks for student-athlete volunteers ahead of a Second Spoon delivery run, she quickly runs out of available slots and spots on the truck.

“It’s probably one of the easiest events for us to get volunteers for,” she said. “Everyone wants to volunteer and sometimes, I’ve had to tell student-athletes they’d have to go the next month. It’s one of the most impactful things we do. You’re literally there, handing the food straight to a homeless person and depending on the person, some of them are very open to telling their stories and sharing how grateful they are for the student-athletes to give them a meal. … It’s very eye-opening.”

In the two years since those first deliveries, Hasan and Burns have helped Second Spoon grow its impact.

When Hasan transferred to Vanderbilt and later USC, he recruited student-athletes at both athletic programs to help reach out to vulnerable communities there. Student-athletes at other schools have expressed an interest in bringing Second Spoon to their campuses and Hasan expects more schools will partner with the organization soon.

But like most everything in 2020, Second Spoon has seen its work impacted by the coronavirus pandemic.

Because they are committed to following their respective athletic departments’ health and safety protocols, the delivery runs in their communities have been paused for a bit. 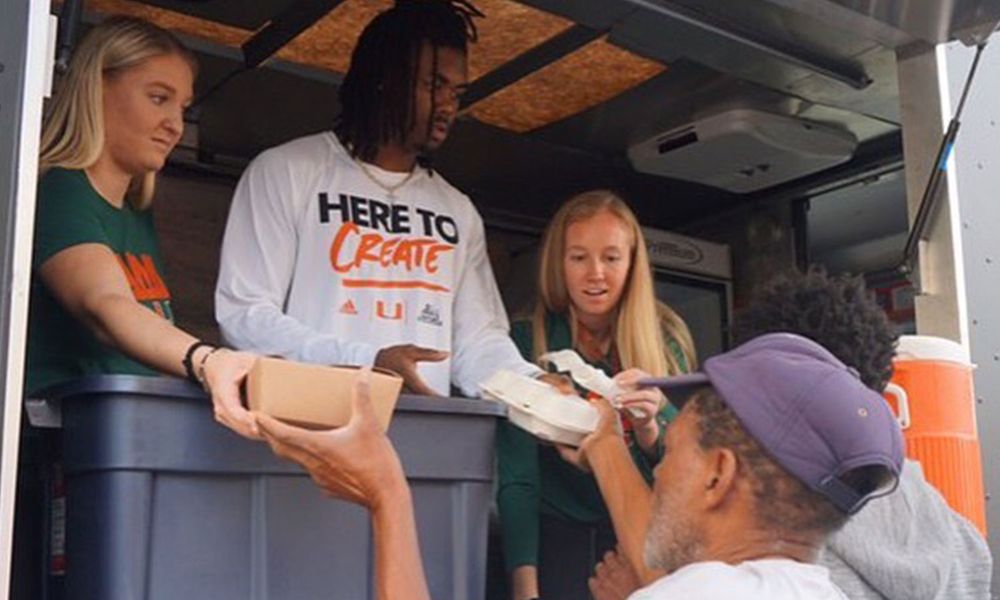 Because they are committed to following their respective athletic departments’ health and safety protocols, the delivery runs in their communities have been paused for a bit.

Still, the organization has continued raising money and early during the pandemic, Second Spoon purchased meals from local South Florida restaurants to deliver to first responders on the pandemic’s front lines.

It was a way, Burns and Hasan felt, to not only help doctors, nurses and other emergency personnel, but to support local businesses that were struggling when shelter-in-place orders were common across South Florida.

“We want to continue on that trend. We’re known for helping the homeless, but we know there are people who aren’t bringing in as much income as before,” Burns said. “We want to help those families who might be in need this time around.”

Said Hasan, “I think like everyone else, Covid has forced us to re-evaluate what we’re doing. It forces you to pivot a little bit…When Covid first hit, we noticed that, number one, first responders needed our help. And small businesses were hurting as well. We were able to sell hats and raise enough money to make a few runs to feed first responders at hospitals, police stations, firefighters. And we aided small businesses by supporting them with takeout meals. That’s a lot of what we’ve been doing and it’s worked two-fold.”

But even as Covid numbers continue to rise, Hasan and Burns know food insecurity still exists in South Florida and beyond. And they remain committed to helping feed those in need as much as they can, as soon as they can.

Both expect Second Spoon will continue expanding in various cities and both believe their work is far from finished.

And they’ll happily welcome help from their fellow student-athletes and beyond as they continue their work.

“I’m really proud of the way that it’s brought together the student-athletes at different universities. I was able to see it firsthand at Miami and then in Nashville with Vanderbilt,” Hasan said. “It became an experience we could share and really bond over. … It brought our student-athletes in contact with some folks they’re not often interacting with on a day-to-day basis and allowing them to give back to the community they represent on game day.”

Said Burns, “We’re expanding because of the need. We don’t just want to expand to expand. We want to be an outlet for student-athletes and beyond, an outlet for people to give back. We truly believe the more you give back, the more you get out of it. Giving back to your community is a healing experience for yourself. Dealing with injuries and going through all the trials and tribulations, giving back was really a healing process for me, inside and out.”