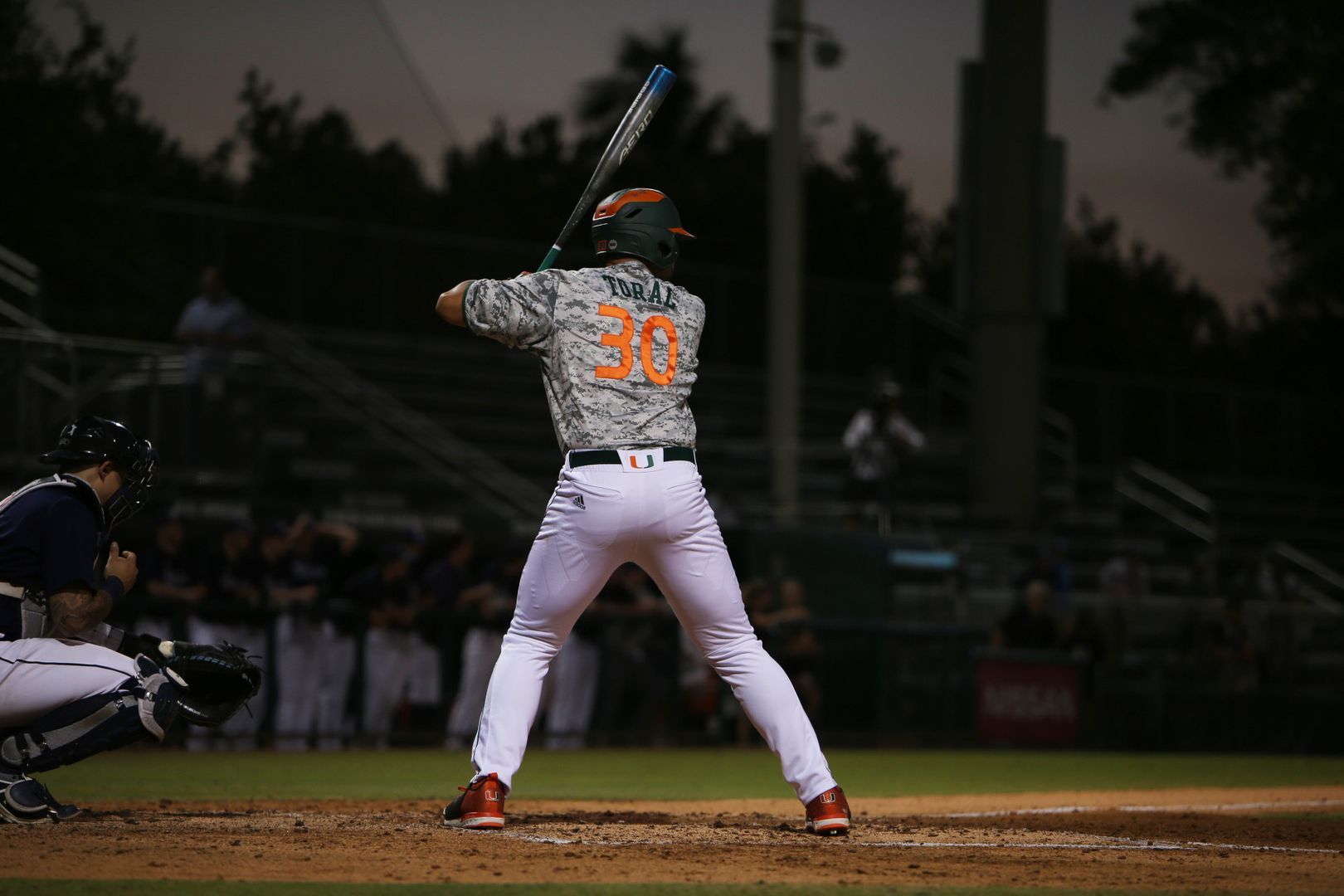 CORAL GABLES, Fla. – It was only appropriate that, in his 25th and final season at the University of Miami head baseball coach, Jim Morris would see something new.

Afterwards, he called it “maybe the craziest game” in which he has ever coached.

Freshman first baseman Alejandro Toral lined a walk-off single through the right side in the bottom of the 15th inning to send the Hurricanes to an improbable 7-6 victory Saturday night at Alex Rodriguez Park at Mark Light Field.

With the game knotted 4-4 after nine innings, Maine went ahead with single runs in extra innings, coming in the 14th and 15th, and both times the Hurricanes responded.

The game featured a blown save in the ninth, a highlight-reel catch that helped set up a dramatic final inning, 38 combined runners left on base, Hurricanes outfielders taking the mound, UM’s third string-catcher seeing time, the first career hit for Miami’s primary backup catcher and eight different Hurricane pitchers.

See what he meant?

“We could have won it many times,” Morris said. “We let them back in it in the ninth…it was a crazy game. We played everybody.”

After six hours, Toral ended it by driving the first pitch he saw from Black Bears reliever Cody Laweryson to score fellow freshman Freddie Zamora from second and send Miami into a wild celebration.

Not many of the 2,593 were left by the time the Hurricanes (4-6) walked off the field victorious.

“Obviously it’s got to be the best feeling in the world,” Toral said. “To be able to get the hit that wins the game for your team. You guys get to all celebrate together as one team. I feel like this was huge for us, especially after we have been having a couple tough losses.

Redshirt sophomore Daniel Epstein (1-0) picked up his first career win, but it was really freshman Dylan Cloonan – who was on the hook for the loss at the time after departing on the mound – who made a diving catch to rob Maine of extra bases, saving his own stat line and preventing the Black Bears from adding some crucial insurance in the 15th.

That set the stage for a wild home half of the frame.

Freshman Tony Jenkins, who entered the game as a defensive replacement in the eighth, opened the inning with an infield single to third.

Jenkins would take second on a wild pitch from Laweryson (0-1) and scored on Zamora’s second double of extra innings, which was cranked to left field.

In stepped Toral, eager to atone for looking punchouts in the 9th and 13thinnings.

“I was looking for anything,” Toral said of his approach to the at bat. “I needed to get the job done. I had come up three times before that and I couldn’t get it done. I needed to bear down and get the hit for the team.”

Toral finished with his first three-hit game as a Hurricane in a 3-for-7 performance.

Not to be lost in the excitement of Toral’s walk-off, sophomore righthander Greg Veliz struck out eight, junior Frankie Bartow made his first appearance since Feb. 17 and freshman Jeremy Cook tossed a career-long three scoreless innings.

Senior Michael Burns scored four runs, including the game-tying run in the 14th on a wild pitch, and reached base for the 10thstraight game to open the year. Cloonan went 2-for-6 and senior Michael Perez went 3-for-3.

The two teams return to Alex Rodriguez Park at Mark Light Field Sunday for the series rubber match. First pitch for the contest, slated for broadcast on ACC Network Extra and 790 The Ticket, is set for 11:30 a.m.