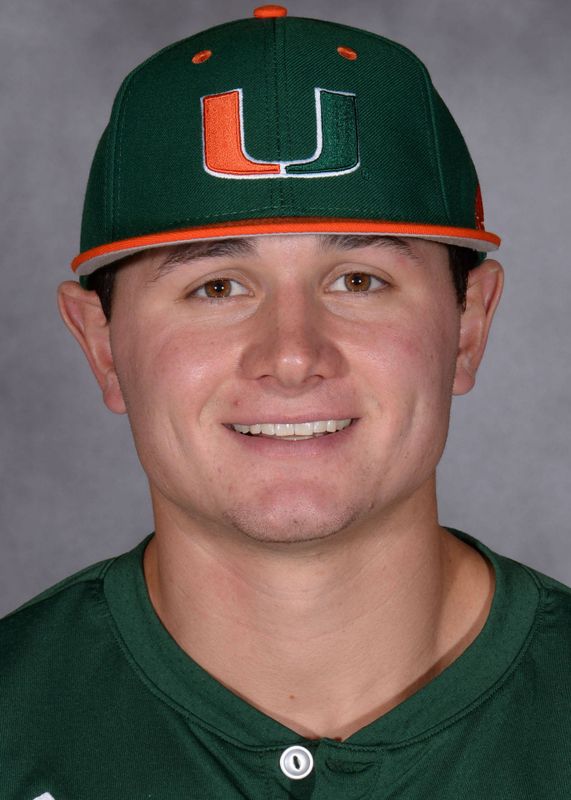 2018 (Redshirt Senior): Veteran outfielder served as one of Miami’s two co-captains…Started 51 of 54 games…Batted .263 with eight doubles, two triples and 21 RBI…Stole six bases and reached base at .363 clip…Finished with 11 multi-hit games, four multi-RBI games…Batted .289 in conference play…Had longest streak of reaching base (20 games) of any player all season…Started 37 games in center field and 14 games in left field…Ranked third in runs scored (27), fourth in hits (49) and tied for the team lead in walks (24)…Opened season on five-game hitting streak and had at least one hit in nine of team’s first 10 games…Went 2-for-5 with one double and one run in series opener against Florida (Feb. 23)…Finished 2-for-4 with two RBI and one double in series finale vs. Gators (Feb. 25)…Compiled five hits and two RBI in team’s series at Duke (March 16-18)…Had seven-game hitting streak from March 16-March 25…Went 2-for-2 with one walk, one steal, one run scored, one double, one triple and three RBI in win over North Carolina (April 8)…Had at least one hit in each game at Clemson (April 13-14)…Had stretch of four straight multi-hit games from April 27-May 4…Totaled six hits and two runs scored in team’s series at Florida State (April 27-29)…Scored five runs and posted four hits in sweep of Bethune-Cookman (May 4-6)…Had four hits and scored two runs in team’s run at 2018 ACC Baseball Championship in Durham, N.C….Went 2-for-4, including game-winning single, in win over Notre Dame (May 22) in ACC Championship opener…Had two hits (2-for-4) against Clemson in Durham.

High School/Prep: Three-year letterwinner at Columbine…Hit .417 with 14 stolen bases, 20 RBI and five home runs as the leadoff hitter during senior season…Batted .451 with five home runs and 10 stolen bases junior year…Two-time all-state selection…Named Male Athlete of the Year at Columbine High School for senior year and was the Hall of Fame selection for his class.