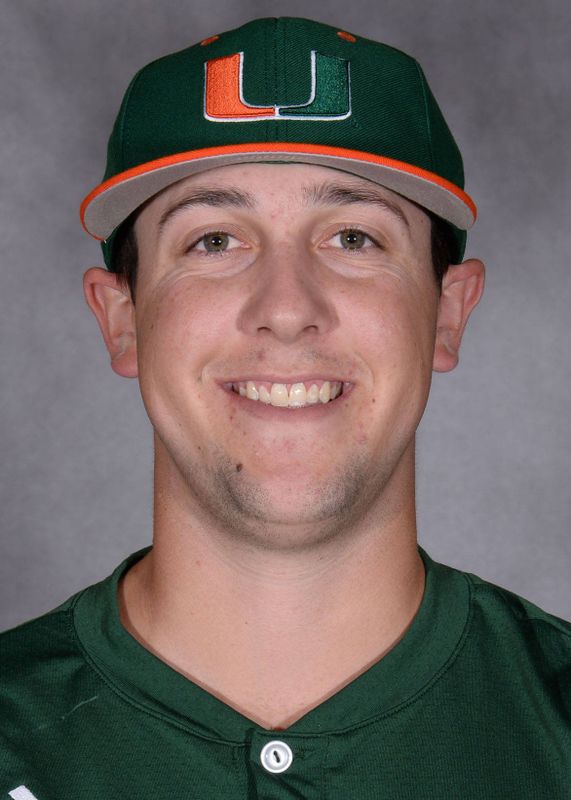 Junior (2018): Served as one of Miami’s top arms out of bullpen for third straight season…Finished with 5-0 record and 3.12 ERA…23 appearances were tied for second-most of any pitcher…Tied for team lead with four saves…Totals of 40.1 innings and 32 strikeouts led all relievers…Recorded 3-0 record and 2.88 ERA in 14 appearances in ACC play…Struck out multiple batters in nine of 23 appearances…Did not surrender first run of year until March 21, in seventh appearance of season…Opened year with 11.0-inning scoreless streak…Earned first save of season with 3.0 scoreless innings vs. Notre Dame (March 10) in Game 1 of doubleheader…Tossed 3.0 scoreless innings spanning two appearances against Virginia (March 23-24)…Notched first win of year vs. Cavaliers (March 23)…Delivered sparkling effort at Clemson (April 13), striking out five batters across 4.0 clean innings to pick up win and help Miami complete eight-run comeback in ninth inning and eventually win in extras…Improved to 3-0 with three innings of relief vs. Bethune-Cookman (May 6)…Earned fourth save of year in final home appearance of season, picking up two-inning save vs. Boston College (May 18)…Credited with win in Miami’s ACC Championship opener against Notre Dame (May 22) in Durham, N.C., tossing 1.2 innings…Struck out four batters in final appearance of year at ACC Championship vs. Clemson (May 24).

Sophomore (2017): Served as team’s closer for first season and finished with 12 saves, good for fourth-most in ACC…Ended year with 1-3 record and 3.60 ERA… Seven of 12 saves came in ACC play…Named to Stopper of the Year Preseason Watch List as nation’s top reliever… Totaled 30.0 innings spanning 28 appearances…Ranked second on the team in appearances… Surrendered just 12 earned runs and had 19 strikeouts on season…Made season debut against Rutgers (Feb. 17) and recorded first save of career with scoreless ninth inning…Picked up second save with scoreless inning at FAU (March 1)…Earned third save despite giving up run in win over Georgia Tech (March 10)…Picked up saves in three straight appearances beginning March 10, earning fourth and fifth of season in wins over Maine (March 15) and NC State (March 19), respectively…Struck out season-high four batters, but tagged for three runs in 1.2 innings against Duke (April 10)…Tossed final 2.0 innings to pick up save against Pittsburgh (April 15), helping Miami clinch series in finale…Captured 10th save with scoreless innings at Boston College (April 28)…Capped doubleheader sweep of Virginia Tech (May 19) with 12th and final save of season…Made two appearances at 2017 ACC Championship in Louisville, Ky., including two scoreless innings of relief in win over Georgia Tech (May 23) in opening game of tournament.

True Freshman (2016): Earned Louisville Slugger Freshman All-America honors from Collegiate Baseball Newspaper after impressive first season…Named to ACC All-Freshman Team…Recorded 2.72 ERA and 6-0 record…43 relief appearances was most of any pitcher nationwide…Struck out 29 batters compared to 10 walks in 56.1 innings…Six wins were most of any reliever… Did not walk more than one batter in any of 43 appearances… Made career debut with two scoreless innings against Rutgers (Feb. 19)…Tossed 2.1 innings against Florida (Feb. 27)…Struck out career-high three batters twice: against Virginia (April 23) and Game 1 of doubleheader at Florida State (May 21)…Had stretch of 11 appearances with zero earned runs allowed from April 23-May 25… Picked up win with one inning of relief vs. Pittsburgh (May 13)…Earned win over NC State (May 26) at ACC Championship in Durham, N.C….Saw action in all three games of Coral Gables Regional and did not allow earned run…Made two appearances in NCAA Super Regional vs. Boston College…Earned win with career-long 3.1 innings of relief against Boston College in finale (June 12) to help send Miami to College World Series…Tossed one scoreless inning of relief in College World Series debut vs. Arizona (June 18)…Pitched final 2.2 innings in season finale against UC Santa Barbara (June 20) at College World Series.

High School: Four-year baseball letterwinner at TERRA…Helped lead team to program-record 14 wins in final season, earning second-team All-Dade honors from Miami Herald…Finished with 6-3 record and 3.05 ERA in 2015, striking out 49 batters…Finished 5-5 with 32 strikeouts and 1.83 ERA in 2014…Batted .423 sophomore season at TERRA.