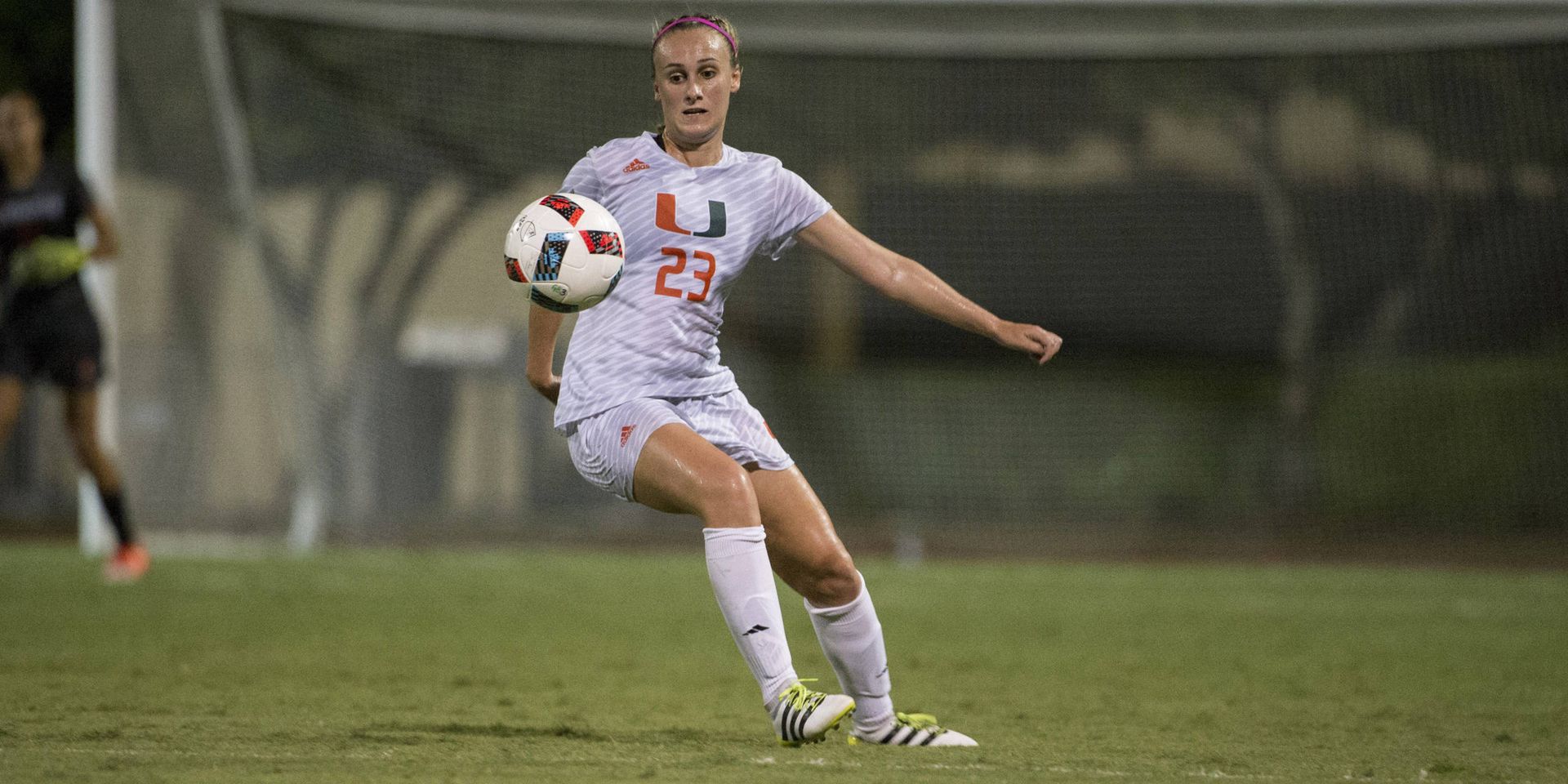 Miami (8-5-0, 3-2-0) had its three-match ACC winning streak snapped by the 22-time national champions despite an early goal from senior forward Gracie Lachowecki.

“We worked hard today. We need to continue to work to keep the ball when we win it,” Miami head coach Mary-Frances Monroe said. “Defensively, we were organized. I was happy we had a great attack by our outside back, Emily Auld, who assisted Gracie on the goal. Phallon came up with a big PK save. [Wed did] some great things we need to continue to grow on. We just need to be better against a top team like North Carolina.”

The Hurricanes scored off some beautiful passing in the 12th minute on just their second shot—and first one on goal—of the evening.

Junior forward/midfielder Grace Rapp played a stellar ball to Auld in the box and the senior defender, who earned her first point of the season on the play, sent it on to the far post. There, she found a charging Lachowecki, the trail runner, and she slipped it past redshirt senior goalkeeper Lindsey Harris, low to the near post, putting the Hurricanes in front.

For Lachowecki, it was her fourth goal in as many matches and her ninth of the season, moving her into a tie with Lindsey Yach for third place on Miami’s all-time goals list with 22.

North Carolina (7-2-3, 2-1-2) pulled level in the 40th minute on a goal by freshman forward Bridgette Andrzejewski off a pass from junior midfielder Megan Buckingham.

For the second consecutive match, Miami entered the locker room at the intermission with the score deadlocked at one.

In the 61st minute, Andrzejewski became the first player to log a multiple-goal outing against the Hurricanes this season when she finished on a header after a stellar cross from senior midfielder Cameron Castleberry.

The Tar Heels padded their lead in the 78th minute when sophomore midfielder Dorian Bailey scored on a strike inside the box. Buckingham and freshman forward Kasey Parker were both credited with assists on the play.

North Carolina had a penalty kick in the 79th minute, but Miami redshirt sophomore goalkeeper Phallon Tullis-Joyce was up to the test, making a super save on Castleberry’s shot. After the rebound, redshirt senior defender Shannon McCarthy saved Castleberry’s second shot off the line, sprinting to protect an open net.

Despite the momentum from the fantastic stops, the Hurricanes were unable to claw back and find another goal in the closing minutes.

Miami will play the second leg of its three straight road matches when it meets Pittsburgh Sunday at 1 p.m., at Ambrose Urbanic Field.