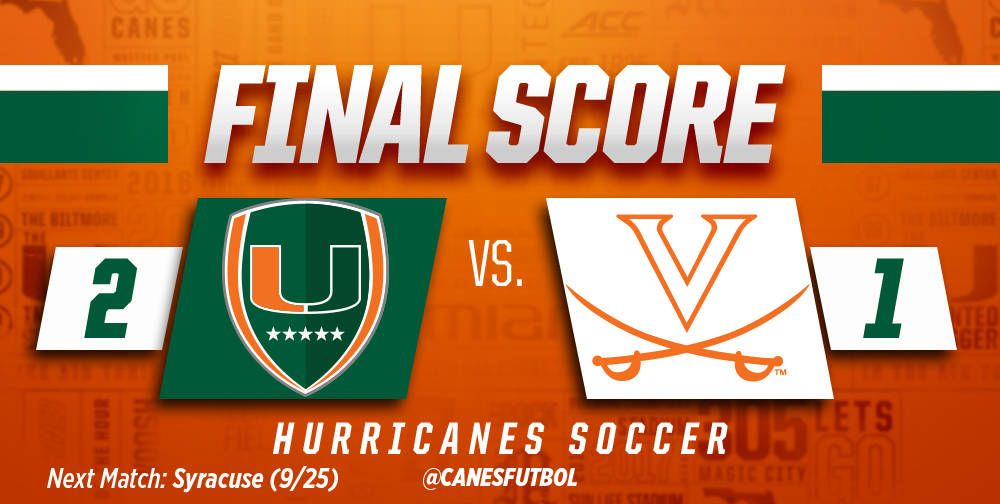 CORAL GABLES, Fla. – For the third time in the last five years and fourth time in program history, the University of Miami soccer team defeated a top-three opponent.

The Hurricanes’ two leading scorers, forwards Gracie Lachowecki and Kristina Fisher, each notched first-half goals to give Miami a lead it would not relinquish. Additionally, redshirt sophomore goalkeeper Phallon Tullis-Joyce logged a career-high-tying six saves, as Virginia suffered its first loss to an unranked team in over six years.

“What a great night, coming in here and playing a program that’s [one of the best] in the country,” Miami head coach Mary-Frances said. “We know every game in our conference is going to be a competitive game and anybody can win any game. We just went into it with the same mentality that we had to play our A-game, all over the field, not one person could slack off tonight.”

The Hurricanes found the back of the net first, scoring in the 21st minute on their opening shot of the evening.

Junior forward Ronnie Johnson played a nice ball to Lachowecki and the senior dribbled into the box, cut back and slipped it past Virginia senior goalkeeper Morgan Stearns, low to the near post.

The goal for Lachowecki, a 2015 Second Team All-ACC selection, was the 19th of her career, moving her past Ashley Flinn for sole possession of sixth place on the Hurricanes’ career list.

“We’ve been working on that with Gracie. She gets in, she has the speed,” Monroe said. “We had so many opportunities against Florida State the same way and we really committed ourselves this week to finish those opportunities that we get, and Gracie did it.”

Miami doubled its lead in the 42nd minute after freshman forward Bayleigh Chaviers was taken down in the box to earn a penalty kick for the Hurricanes.

Fisher then calmly stepped to the spot and buried the ball in the back of the net, giving her a team-leading seven goals in her freshman campaign, two of which have come on penalty kicks.

“Bayleigh did a wonderful job of trying to get that ball and fighting for it. She is the one who helped us get that PK, so she did a fantastic job,” Monroe said. “Having ‘Fish’ just step up to take that shot—we didn’t tell people who take the PK. I want to see who’s confident, who gets up there. I think she really needed . . . to score a goal in this game today and that really is going to build her confidence going into the next game.”

Buoyed by four first-half saves from Tullis-Joyce, the Hurricanes took its two-goal edge into the locker room at the break.

The Miami defense held strong until the 86th minute, when Virginia finally got on the board. Senior midfielder Alexis Shaffer sent a superb cross to freshman midfielder Zoe Morse and she finished it to give the Cavaliers their lone goal.

Virginia continued its offensive pressure the rest of the way, but an outstanding stop by Tullis-Joyce—her season-high sixth of the night—in the 89th minute assured the Hurricanes of the victory.

“I think [it stayed] as high as it was when we scored our first two goals,” Monroe said of the team’s confidence after conceding a goal. “We have the mentality of, ‘You know what, there was a goal scored against us, but we’re still winning and now we just have to put in our fight.’”

The win was Miami’s 21st over a ranked team in program history and the Hurricanes have now defeated at least one top-25 team in all but two seasons dating back to 2001. This was the 11th time Miami has notched a top-10 victory and the fifth time it has defeated a team in the top five.

For Virginia, its last loss to an unranked team came on Sept. 19, 2010, when it dropped a 1-0 decision at West Virginia. The Cavaliers’ last conference loss to a ranked opponent was 2-1 home setback against Virginia Tech on Sept. 30, 2009.

Since the start of the 2010 season, Virginia is now 126-22-9 (.803) and 19 of its defeats have come against top-20 opponents, including 13 to top-10 teams. This was the first time the Cavaliers, who entered with eight shutout victories, were held without multiple goals this season.

The Hurricanes will continue conference play Sunday afternoon when they host Syracuse at Cobb Stadium at 1 p.m.