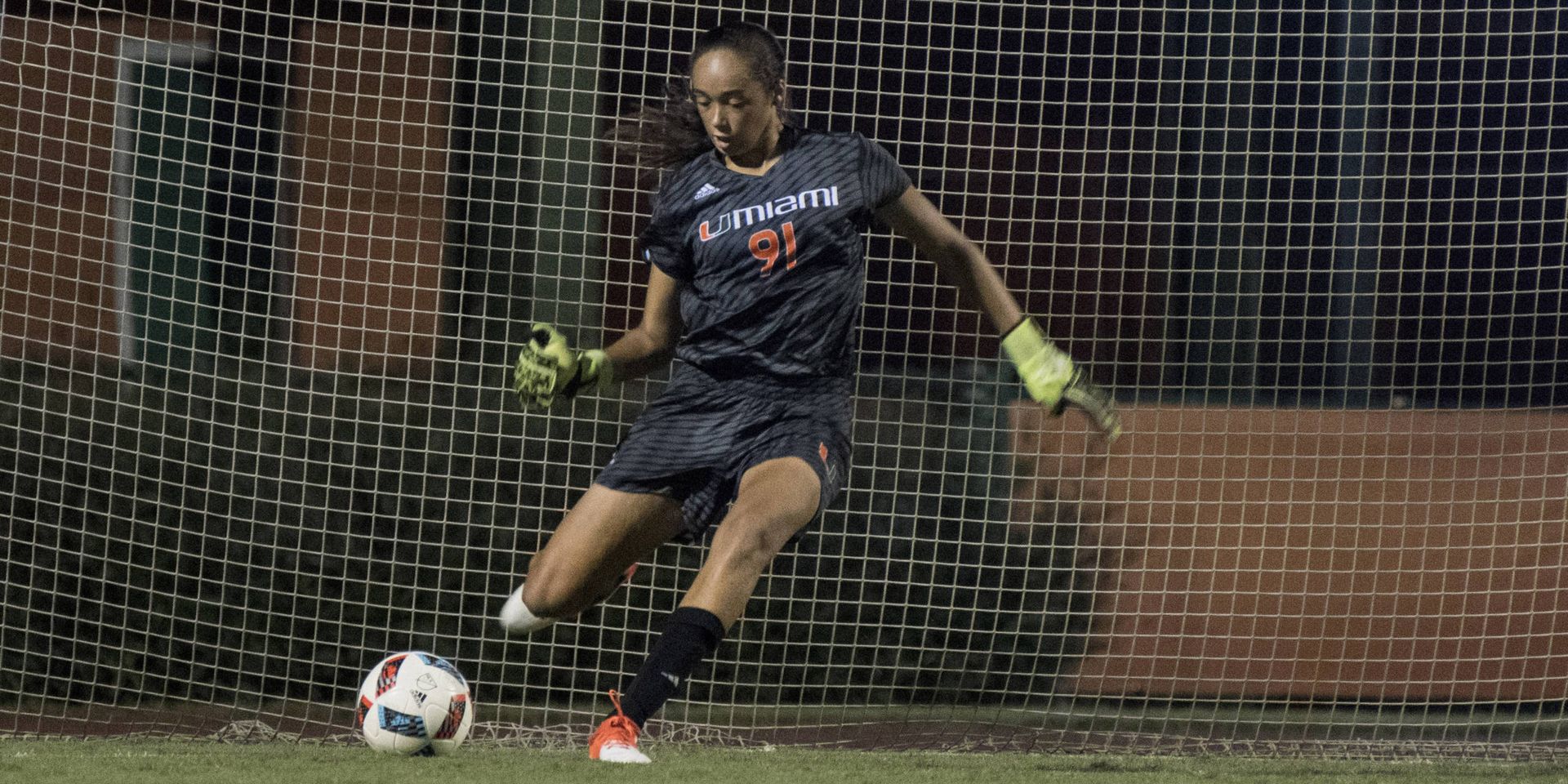 CORAL GABLES, Fla. – Freshman forward Kristina Fisher of the University of Miami soccer team hit the crossbar in the closing minutes Thursday night at Cobb Stadium, but FGCU held strong and earned its third 1-0 victory of the season.

Miami (5-2-0) redshirt sophomore goalkeeper Phallon Tullis-Joyce, the reigning NSCAA College Player of the Week, logged a season-high-tying five saves, despite the Hurricanes falling for just the second time in 2016.

“We need to do a better job as a team of playing together on our attack,” Miami head coach Mary-Frances Monroe said. “We did a really good job of that at the beginning of the season and we just have to improve in that in our next game.”

The first half saw limited offensive opportunities for both sides. The teams combined for eight total shots and both tallied just two shots on goal.

Miami did have a handful of chances in the opening 45 minutes off set pieces and crosses, but could not quite convert.

Redshirt senior defender Shannon McCarthy made a superb play in the 52nd minute to keep the match scoreless, as she got in front of an FGCU (3-3-0) shot from just yards out that looked ticketed for the back of the net.

The Eagles, though, scored the lone goal of the night on a header by senior forward Tabby Tindell in the 55th minute off a stellar cross to the far post by redshirt senior forward Ali Rogers.

Tindell’s tally ended a streak of 339 minutes and 44 seconds in a row during which Miami did not concede a goal. Of those, 319 minutes and 15 seconds came with Tullis-Joyce in net.

A Shoreham, N.Y., native, Tullis-Joyce made a stellar play in the 69th minute to knock a strike from distance over the bar. On the ensuing corner kick, she made an even more impressive play, diving to her left to stop a shot from close range and keep Miami within a goal.

The Hurricanes nearly pulled level in the 72nd after freshman forward Dejah Cason played a great ball into the box, but junior forward/midfielder Grace Rapp had her header saved by FGCU freshman goalkeeper Melissa Weck.

In the 88th minute, Miami came even closer to tying the score. Fisher, who was held without a point for the first time in her young career, had her shot from just outside the box ring off the crossbar and very nearly bounce past the goal line.

“In the second half, we played much better,” Monroe said. “We started to play like the Miami team that we are. We put them under pressure. [Fisher’s attempt] was a nice individual effort, taking on players. It was a great shot. It’s unfortunate that it hit the bar. We had runners on it, but it went over their heads.”

Despite its late efforts pushing numbers forward, the Hurricanes were unable to find the equalizer and came away on the short end of the 1-0 result.

Thursday marked the third consecutive match Miami has played that ended with a 1-0 score and it was the fifth time in six outings FGCU has had a game end with a 1-0 final.

After notching five shutout victories in its first six matches for the second time in program history, this was the first contest in which Miami was on the opposite end of a shutout in 2016.

“We’ve only had three goals scored against us [this season] and none of them have been in the run of play,” Monroe said. “We know what we need to work on for our next game.”

The Hurricanes are set to wrap up their six-match homestand Sunday at 1 p.m., when they take on FIU in a Miami-Dade County showdown at Cobb Stadium.