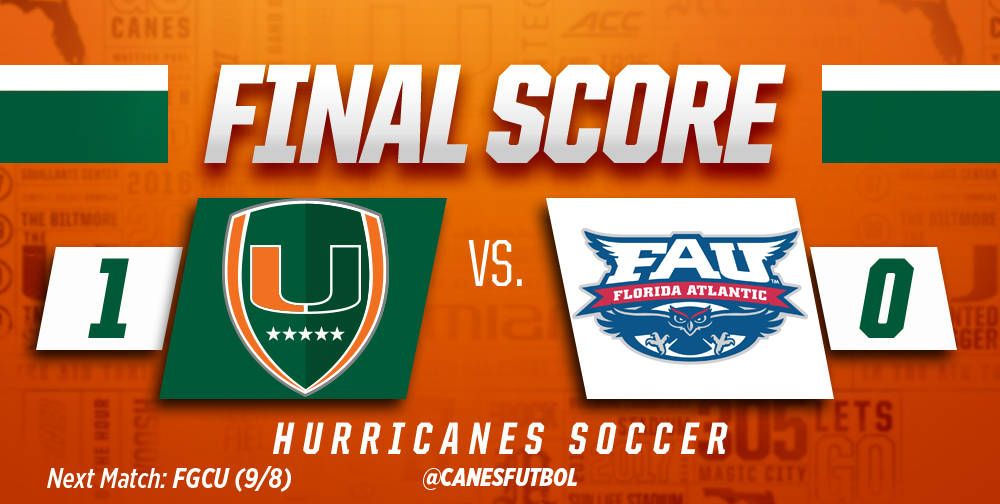 CORAL GABLES, Fla. – The University of Miami soccer team logged its third shutout victory in a row Sunday afternoon at Cobb Stadium with a 1-0 win over Florida Atlantic.

Senior forward Gracie Lachowecki scored the match’s lone goal early in the second half and redshirt sophomore Phallon Tullis-Joyce made a season-high-tying five saves in the victory.

“I think after our performance on Friday we really needed to connect more [passes],” Miami head coach Mary-Frances Monroe said. “Something I talked to the team about is having a sense of urgency and playing with energy, and that’s exactly what they did today.”

For the second time all season, Miami played a half in which neither team found the back of the net, as both teams entered the locker room with the match scoreless. Additionally, it was just the third time in 2016 the Hurricanes were held without a goal in a half.

However, both sides did have chances in the opening 45 minutes. The Hurricanes had six shots on goal, but Florida Atlantic (3-3-0) redshirt senior goalkeeper Sydney Drinkwater made saves on all of them.

Meanwhile, for Miami, Tullis-Joyce logged four stops in the first half, including a trio on shots from close range.

After the break, Miami broke through in the 55th minute on the 18th goal of Lachowecki’s career, a tally that moved her into a tie with Ashley Flinn for sixth place on the program’s all-time list.

Frteshman defender Madison Louk played the ball to freshman forward Kristina Fisher, who sent a cross towards Lachowecki and she put it past Drinkwater from close range.

“Madison played a great ball . . . Both Kristina and Gracie were in the right space and trying to win the ball,” Monroe said.” “‘Fish’ ended up winning it, dribbling and had a really great service into the box for Gracie to finish on.”

Despite furious efforts from the Owls down the stretch, the Miami defense held strong and did not concede an equalizer. The Hurricanes have now gone over 285 consecutive minutes without allowing a goal.

“I think that they really trust each other and they’re really confident in each other,” Monroe said of what has made the back line and Tullis-Joyce so solid. “Our defending has been much better this season. Even under pressure they have the ability to win tackles in one-v-ones and continue to complete passes.”

Sunday’s match was the 14th meeting between the Miami and Florida Atlantic, placing the Owls into a tie with UCF as the Hurricanes’ most common non-ACC opponent all-time.

Miami returns to the field Thursday at 7 p.m., when it welcomes FGCU to Cobb Stadium.