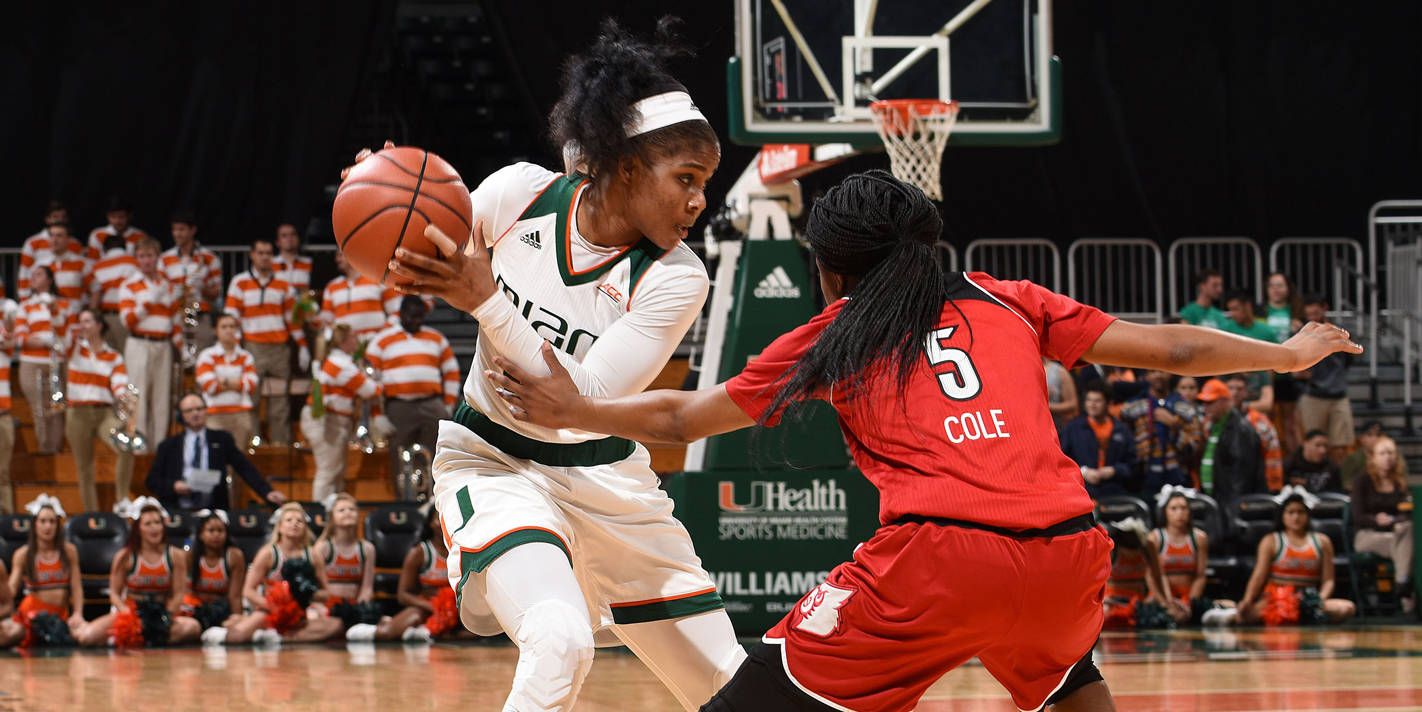 CORAL GABLES, Fla. – The University of Miami women’s basketball team fell in its last home game of the 2015-16, 79-51, against No. 10 Louisville Thursday night at the BankUnited Center.

“The effort by Louisville was astounding, they were really great,” Miami head coach Katie Meier said. “You have to give them a lot of credit.”

The Hurricanes scored six of the first eight points of the second period to pull within one, but the Cardinals controlled play for the remainder of the session and led 40-21 entering the locker room.

Miami scored five-straight points to open the second half, but the Cardinals were quickly able to stop the building momentum at the BUC. They went on to take a 64-30 edge entering the final period of action.

The Hurricanes outscored Louisville by six in the fourth quarter, 21-15, including posting a 7-0 run. Freshman forward/center Zada Williams scored six points in the last period, setting a new career high in ACC play for a full game.

Prior to the game, Miami honored redshirt senior guard Michelle Woods on her senior night. A native of Naples, Fla., Woods is a team co-captain who ranks ninth on the program’s all-time appearances list (123) and has posted 27 double-digit scoring games.

“Throughout my entire career there have been one or two players in terms of caring for the coach like her. She’s got another level of compassion and understanding for her coach,” Meier said. “She really wants to know what message the team needs from me. Behind the scenes, she just checks on the staff to make sure we’re okay. She’s just a wonderful human being. I’m going to miss her toughness, but I’m going to miss her smile and compassion more than anything.”

Miami finished the season 13-3 at home. It is the seventh-straight season the Hurricanes have posted double-digit home victories and single-digit home losses. They have been at least 10 games over .500 at the BUC in five of those campaigns.

The Hurricanes are set to wrap up the 2015-16 regular season Sunday at 3 p.m. when they take on No. 12/12 Florida State. The game will be broadcast live on ESPN2 from the Donald L. Tucker Civic Center in Tallahassee, Fla.

·         For the second game in a row, Miami’s starting lineup was Erykah Davenport, Motley, Khaila Prather, Thomas and Woods.

·         The all-time series between the Miami and Louisville is now 2-1 in favor of the Cardinals.

·         Five different Hurricanes blocked a shot in the game, including four starters.

·         Woods moved past Loretta Harvey into sole possession of ninth place on the Hurricanes’ all-time appearances list with 123 games played.

·         Laura Cornelius tied with Thomas for the game lead with five assists, her sixth outing this season with at least five assists.