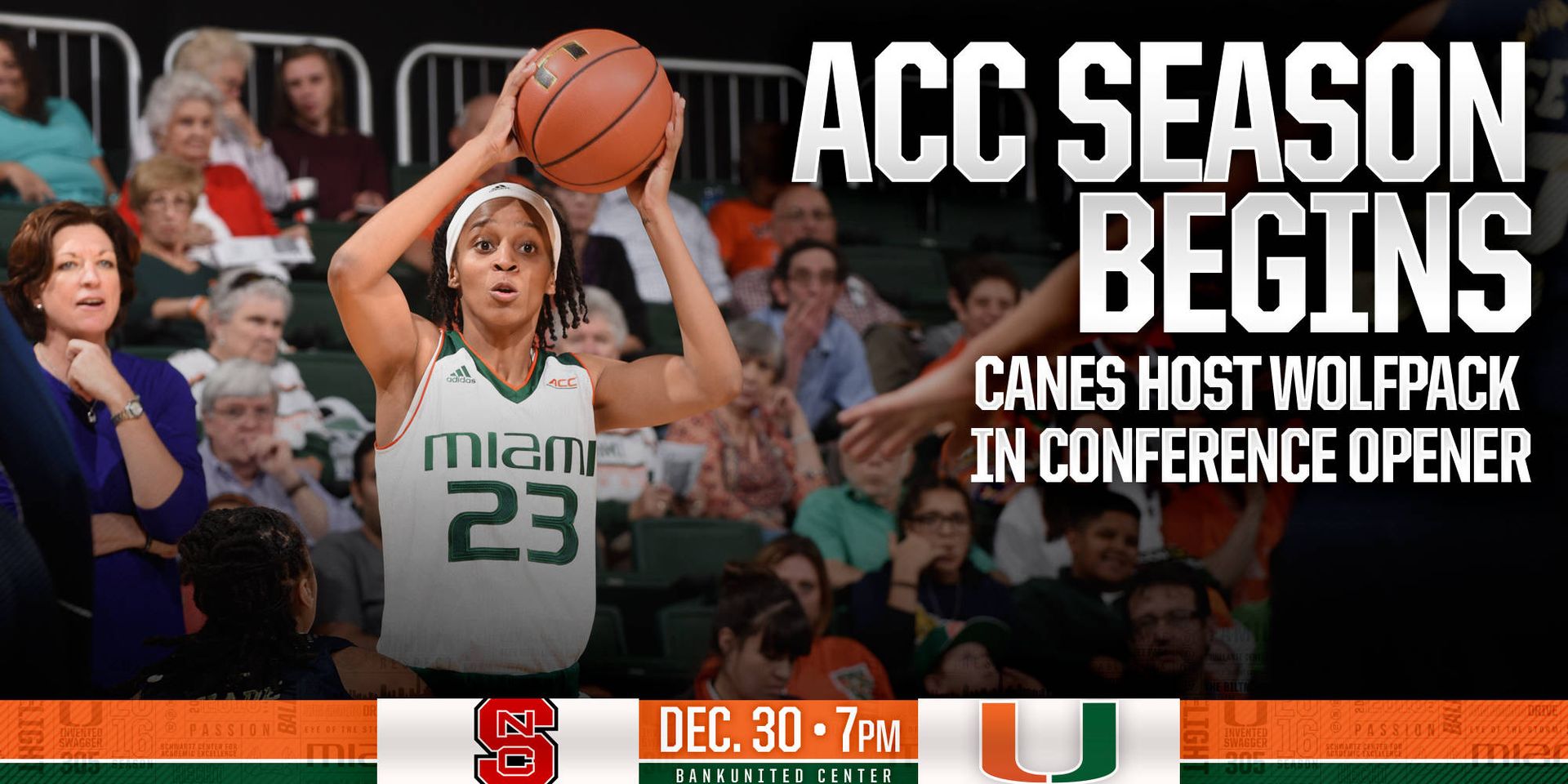 The Game
Miami, ranked No. 22 in the AP Poll and No. 20 in the USA TODAY Coaches Poll, begins ACC play Wednesday night against NC State. The contest is scheduled for 7 p.m. at the BankUnited Center. Tickets are $5, with youth 12-and-under admitted free of charge.

The Series
The Hurricanes trail 10-8 in the all-time series against the Wolfpack, but have won eight of the last 10 meetings, including seven of the last eight and five-straight at home. In the most recent matchup, NC State earned a 68-65 home win last season on Feb. 19, 2015.

Meier has guided Miami to 53 victories in ACC play over the past five seasons, the second-most of any team in the conference. The 2010-11 AP National Coach of the Year  is in her 15th season as a head coach, spending the first four at Charlotte, and owns a career record of 271-180, including 195-135 at Miami.

The Opponent
NC State opened the season at 5-0 and currently sits at 9-4 on the season after splitting its last eight games. The Wolfpack has a trio of players averaging double-digit points per game, with redshirt junior guard Dominique Wilson pacing the group at 13.6 an outing. Junior forward Jennifer Mathurin is adding 12.8 points and a team-high 6.5 rebounds per game, while junior guard Miah Spencer is averaging 11.8 points and a team-high 5.5 assists. NC State was picked ninth in the ACC preseason poll after going 18-15 (7-9 ACC) in 2014-15.

Last Time Out
The Hurricanes scored over 80 points for the fourth-straight time in their 83-55 victory over FIU Dec. 22 at the BankUnited Center. Miami never trailed in the game and had four players score in double figures. Motley logged 19 points, while Thomas posted 15, Davenport tallied 11 and Woods added 10. Woods also grabbed a career-high 10 rebounds to record her first double-double as a Hurricane. Miami had a 36-12 edge in points in the paint, 24-8 in points off turnovers and 31-3 in bench points. The Hurricanes also did not concede a single second chance point and posted 20 of their own.

Up Next
Miami is set to begin its conference road slate Sunday at 1 p.m. when it takes on Virginia at John Paul Jones Arena in Charlottesville, Va.

Additionally, there will be a chalk talk in the Hurricane 100 Room at 5:45 p.m. All season ticket holders are invited to attend the event, for which doors open at 5:30 p.m.