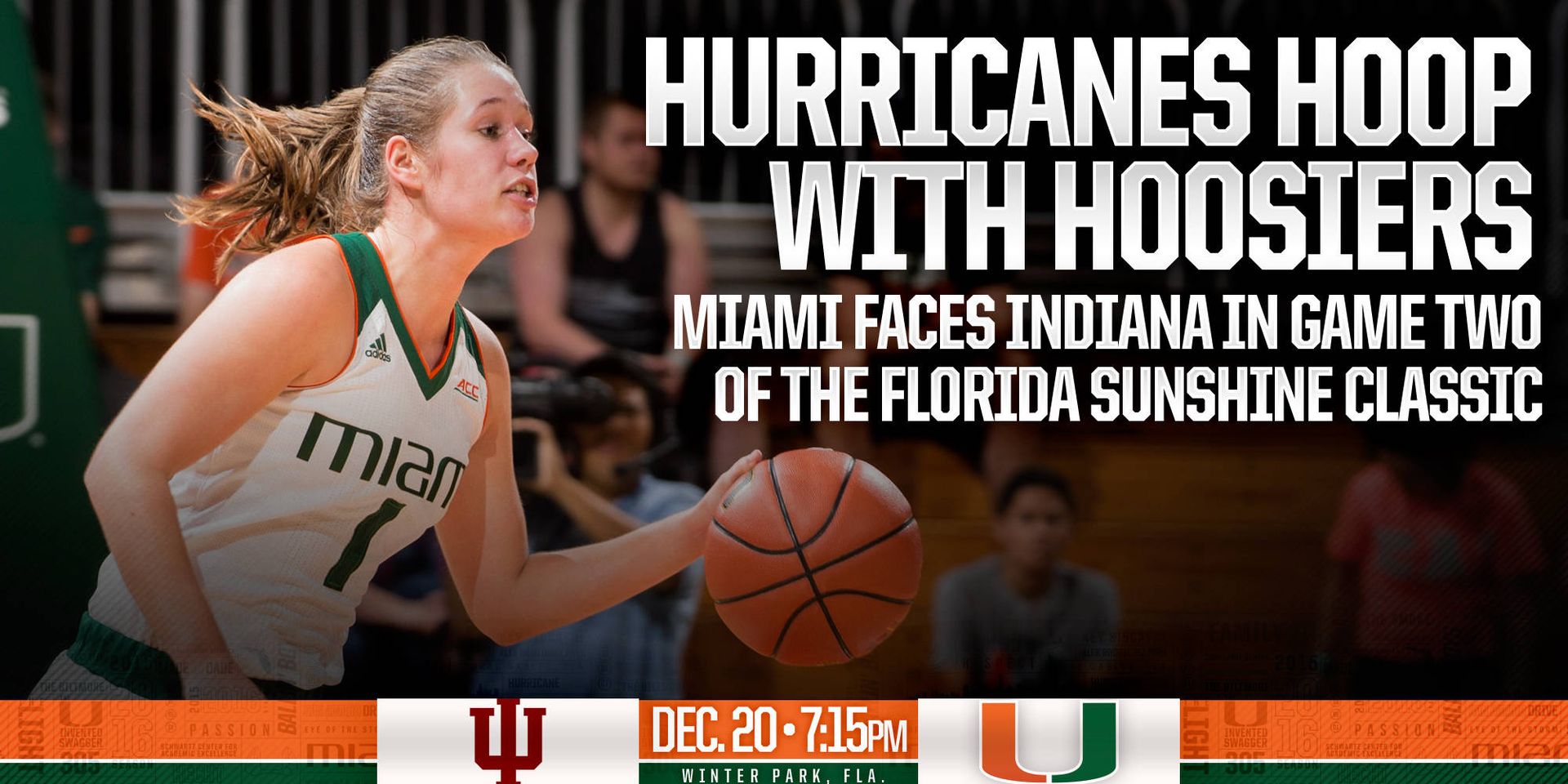 The Game
Miami, ranked No. 23 in the AP Poll and No. 21 in the USA TODAY Coaches Poll, will conclude play in the Florida Sunshine Classic Sunday evening against Indiana. The game is scheduled for 7: 15 p.m. at Rollins College’s Warden Arena.

The Florida Sunshine Classic
The game between the Hurricanes and Hoosiers is the third of five in the Florida Sunshine Classic in Winter Park, Fla. Miami fell 88-81 to No. 4/4 Baylor Saturday night in its first game of the event. Also on Sunday, James Madison meets West Virginia at 5 p.m. Monday, the Bears take on the Dukes at 5 p.m., followed by the Mountaineers playing the Hoosiers at 7:15 p.m.

The Series
The Hurricanes and Hoosiers have squared off twice before, with each team taking one meeting. In the most recent contest, Indiana picked up a 69-54 victory win on the road on Dec. 5, 2008.

Meier has guided Miami to 53 victories in ACC play over the past five seasons, the second-most of any team in the conference. The 2010-11 AP National Coach of the Year  is in her 15th season as a head coach, spending the first four at Charlotte, and owns a career record of 269-180, including 193-135 at Miami.

The Opponent
The Hoosiers enter at 7-2 on the season and are riding a four-game winning streak, but have not played since Dec. 11. Sophomore guard Tyra Buss is pacing Indiana with 19.0 points and 3.9 assists per game, while sophomore forward Amanda Cahill is averaging 13.2 points and a team-high 7.7 rebounds. Indiana posted a 15-16 record in 2014-15, including a 4-14 mark in Big Ten play.

Last Time Out
The Hurricanes dropped their first game of the season Saturday night against fourth-ranked Baylor in their Florida Sunshine Classic opener. The Lady Bears won 88-81 behind 25 points from All-American junior forward Nina Davis and 24 from redshirt junior guard Alexis Jones.

Miami was led by a season-high-tying 24 points from Motley, who shot 9-of-16 (56.3 percent) from the floor and hit a career-best five 3-pointers on seven attempts. Thomas chipped in with a season-high 18 points and matched her season best with six assists. The Hurricanes led by as much as seven and were in front for 14 minutes and 31 seconds of action.

Up Next
Miami will wrap up its non-conference slate Tuesday at the BankUnited Center when it hosts FIU at 2 p.m.