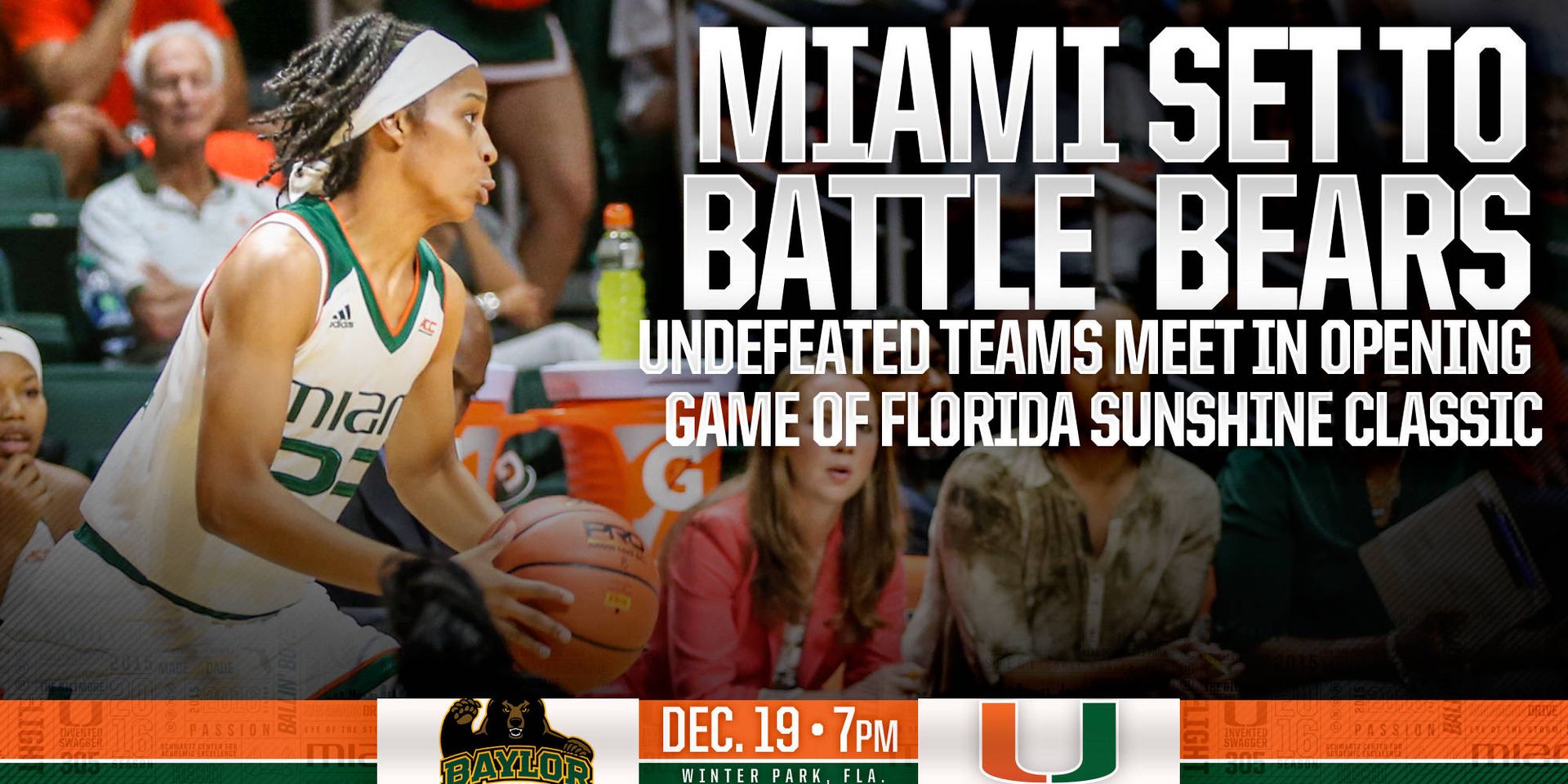 The Game
The Hurricanes, ranked No. 23 in the AP Poll and No. 21 in the USA TODAY Coaches Poll, open play in the Florida Sunshine Classic Saturday against No. 4/4 Baylor. The game is set for 7 p.m. at Warden Arena on the campus of Rollins College.

The Florida Sunshine Classic
The game between the Hurricanes and Lady Bears is the first of five in the Florida Sunshine Classic in Winter Park, Fla. Miami will play Indiana Sunday at 7:15 p.m. in its second game of the event. Also on Sunday, James Madison meets West Virginia at 5 p.m. Monday, the Lady Bears take on the Dukes at 5 p.m., followed by the Mountaineers playing the Hoosiers at 7:15 p.m.

The Series
Miami and Baylor have met once before, with the Hurricanes taking down the Bears 64-55 on Nov. 30, 1985. That game also came on a neutral court, as it was played in Baton Rouge, La. as a part of the Louisiana State Classic.

Meier has guided Miami to 53 victories in ACC play over the past five seasons, the second-most of any team in the conference. The 2010-11 AP National Coach of the Year  is in her 15th season as a head coach, spending the first four at Charlotte, and owns a career record of 269-179, including 193-134 at Miami.

The Opponent
The Lady Bears, like Miami, are among only 13 undefeated teams remaining at the Division I level, currently sitting at 11-0 on the season. Baylor is led by All-American junior forward Nina Davis, who averages 17.1 points on 68.5 percent shooting from the field, and senior guard Niya Johnson, the national leader in assists per game at 10.7. The Lady Bears posted a 33-4 (16-2 B12) mark in 2014-15 and reached the Sweet 16 for the seventh season in a row.

Last Time Out
Miami rolled to an 84-53 victory over UMass Lowell Dec. 6 at the BankUnited Center to become the first Division I team to reach double-digit wins on the season. Four Hurricanes finished with double figures, with Motley’s 18 points on 7-of-10 shooting from the floor leading the way. Hof chipped in with 11 points, while Davenport and Greene each added 10. Miami connected on 49.3 percent of its field goal attempts and had a 44-14 edge in points in the paint in the victory.

Up Next
The Hurricanes will conclude play at the Florida Sunshine Classic Sunday at 7:15 p.m. with a game against Indiana.