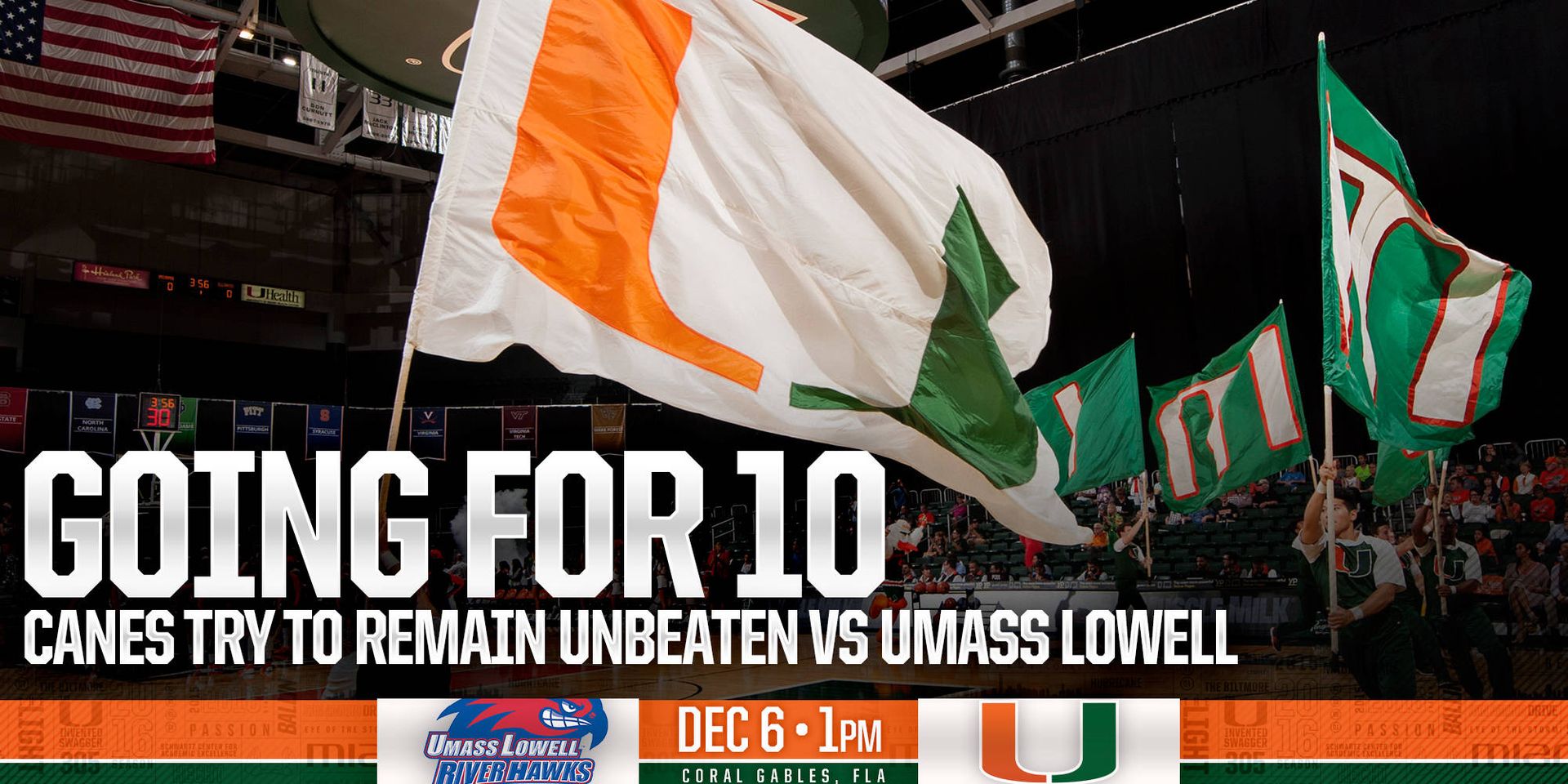 The Game
Miami, receiving votes in both the AP Poll and USA TODAY Coaches Poll, will take on UMass Lowell Sunday at the BankUnited Center. The game between the Hurricanes, who are the lone 9-0 team in the country, and the River Hawks is set for 1 p.m. Tickets are $5, with youth 12-and-under admitted free of charge.

The Series
The Hurricanes and River Hawks have never played each other before. UMass Lowell is the fourth team Miami will face this season that it has not previously faced.

Meier has guided Miami to 53 victories in ACC play over the past five seasons, the second-most of any team in the conference. The 2010-11 AP National Coach of the Year  is in her 15th season as a head coach, spending the first four at Charlotte, and owns a career record of 268-179, including 192-134 at Miami.

The Opponent
The River Hawks were tabbed seventh in the America East Conference preseason poll and are 1-6 so far this season. Three UMass Lowell players are averaging over a dozen points per game, led by sophomore forward Kayla Gibbs, who posts 15.1 points and 9.7 rebounds an outing. The River Hawks recorded a 14-15 (7-9 AE) mark last season.

Last Time Out
The Hurricanes led from start to finish in a 78-59 victory over Coppin State at the BUC Friday. Miami was in front for 39 minutes and 51 seconds of action and doubled up the Eagles in bench points, 34-17. Thomas led all scorers with 16 points and also dished out five assists. Davenport and Harris both finished with 10 points in the victory, while Hayes added eight points, nine rebounds and a game-high and career-high-tying three steals.

Up Next
After five games in nine days, Miami will have 12 days off before returning to the court Saturday, Dec. 19 at 7 p.m. against Baylor. The Hurricanes and Bears will meet in Winter Park, Fla. as a part of the Florida Sunshine Classic. Miami then plays Indiana the next day at 7:15 p.m.

Promotions
As is the case for all women’s basketball games at the BankUnited Center this season, youth 12-and-under will receive free admission. Team posters, schedule cards and new rules infographics will be available at the marketing table by the main entrance. Additionally, there will be a pizza giveaway to students in attendance at the game.