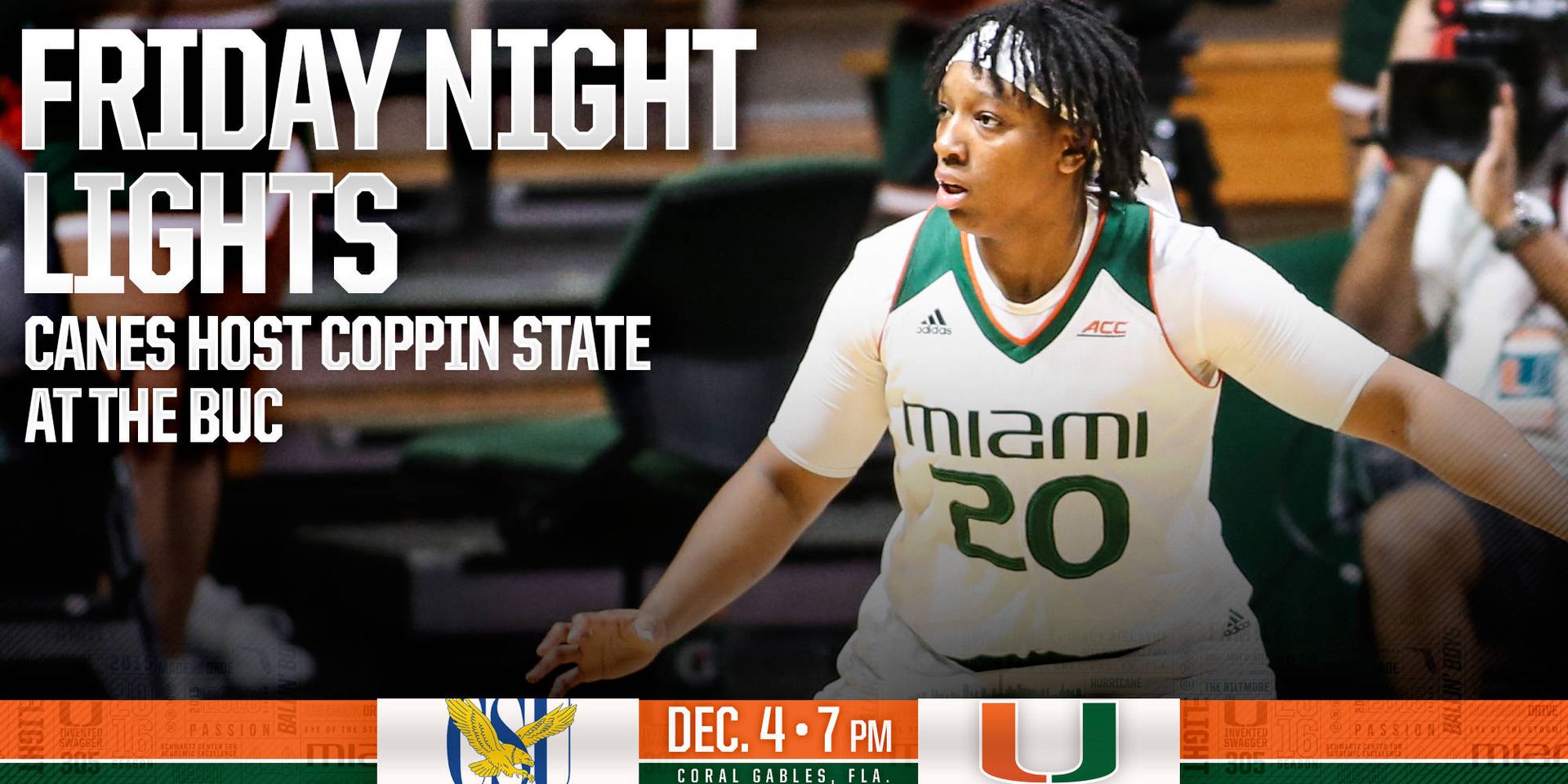 @CanesWBB to Face Coppin State at the BUC

The Game
The Hurricanes, receiving votes in both the AP Poll and USA TODAY Coaches Poll, are set to square off against Coppin State Friday night at 7 p.m. at the BankUnited Center. Tickets are $5, with youth 12-and-under admitted free of charge.

The Series
After never previously meeting, Miami and Coppin State have played each other in each of the past two years, with the Hurricanes winning both meetings. Miami topped the Eagles 70-54 on Dec. 13, 2014 in the most recent matchup.

Meier has guided Miami to 53 victories in ACC play over the past five seasons, the second-most of any team in the conference. The 2010-11 AP National Coach of the Year  is in her 15th season as a head coach, spending the first four at Charlotte, and owns a career record of 267-179, including 191-134 at Miami.

The Opponent
The Eagles have four players who average double-digit points per game, led by senior forward Janelle Lane at 12.2 per contest. Coppin State is 2-4 on the season has not played outside the state of Maryland since Nov. 16. The team was picked seventh in the Mid-Eastern Athletic Conference, garnering two first place votes, after a 7-22 (5-11 MEAC) campaign last year.

Last Time Out
After trailing by as many as 13 points, Miami fought back to earn a 73-64 victory over Illinois in front of a record student crowd Wednesday night at the BUC. The win moved the Hurricanes to 8-0 for the second time in program history, joining a 12-0 start in 2003-04.

Down by eight points in the fourth period, Miami went on a 16-0 run to take a lead it would not relinquish. Motley scored 24 points, with 16 coming in the second half, to go along with 15 from Thomas and 13 from Hof, who had 11 after the break. The Hurricanes more than doubled Illinois in points in the paint, finishing with a 34-16 advantage after limiting standout sophomore center Chatrice White to six points on 2-of-9 (22.2 percent) shooting.

Up Next
The Hurricanes will wrap up their five-game homestand Sunday at 1 p.m. when they face UMass Lowell at the BUC. It will be the team’s last home game until a Dec. 22 contest against FIU.