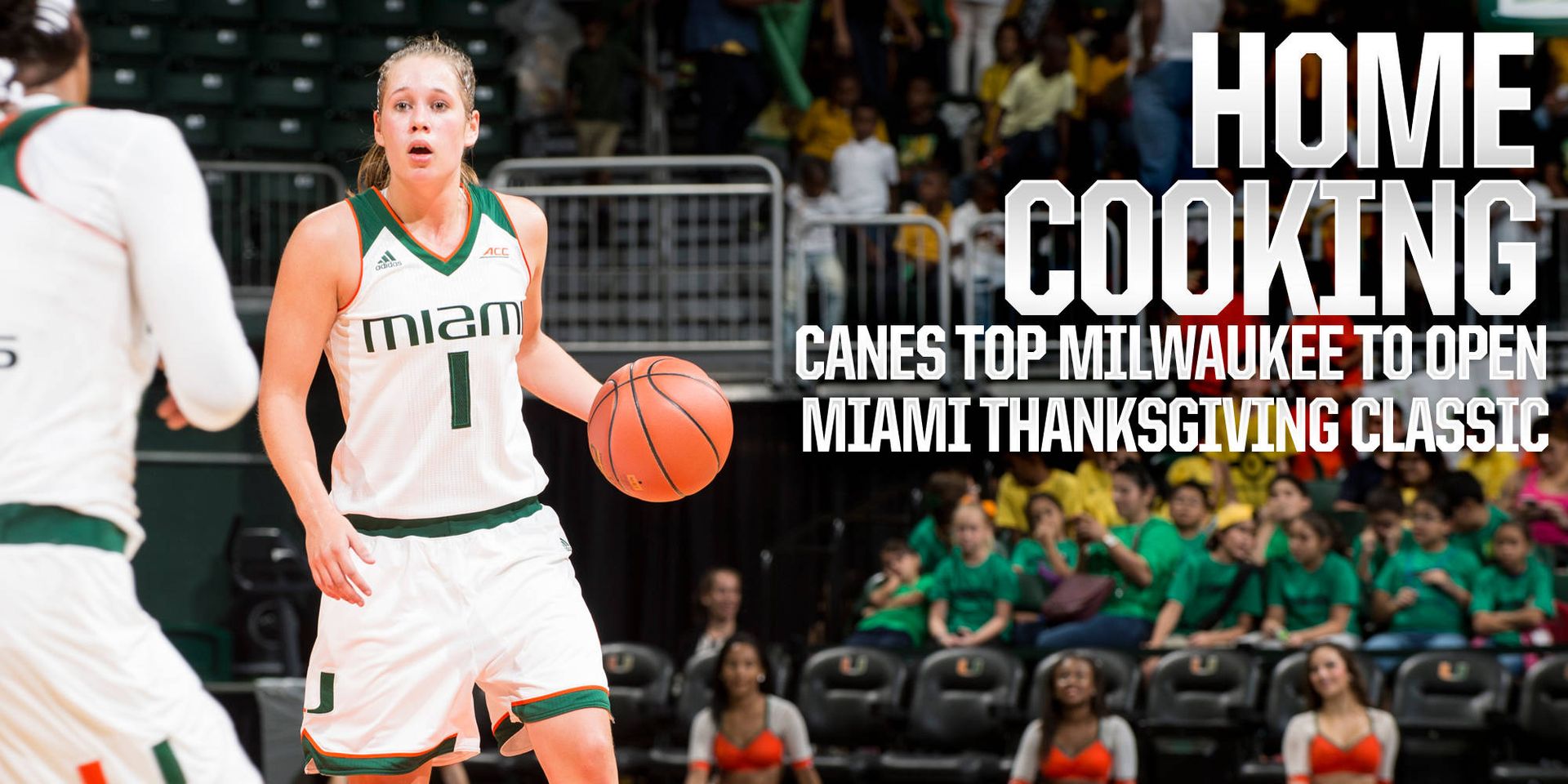 CORAL GABLES, Fla. – Junior guard Adrienne Motley scored over 15 points for the fourth-straight game and the University of Miami women’s basketball team cruised to a 77-38 win over Milwaukee Friday afternoon at the BankUnited Center.

Motley poured in 17 points, including 13 in the second half, to help the Hurricanes earn their largest margin of victory in greater than 10 months.

Milwaukee (1-2) took a 3-2 lead early in the first period and then it was all Miami. The Hurricanes scored 12-consecutive points to go up by double digits and never looked back, earning a 19-9 lead through 10 minutes of play.

“I thought our guards really played with a great pace. We’ve been working on that in practice,” Miami head coach Katie Meier said of the team’s quick start. “. . . I was excited to get back home and get that tempo back. It’s a hard thing to prepare for. You can know our plays, but if we run them at the pace we need to run them at, they’re hard to defend. “

In the second period, the Hurricanes continued to play relentless defense at one end and hit shots at the other, leading by as much as 22 points. When the horn sounded for halftime, Miami held a 35-19 advantage.

Freshman guard Laura Cornelius had a team-high eight points at the break and connected on both of her 3-point attempts. Meanwhile, the Hurricanes held Milwaukee to 6-of-30 shooting (20 percent) from the floor in the first 20 minutes.

Miami extended its advantage by a point in the third period, going ahead 51-34 entering the fourth period of play. No Hurricanes had double figures through the first three quarters, but six had at least six points.

Motley scored nine points in the first five minutes of the fourth period to put the game out of reach as well as move to 998 points in her college career. The Newport News, Va., native’s strong surge to begin the frame helped the Hurricanes outscore Milwaukee 26-4 in the last period. The 26 points were the most Miami has scored in a quarter this season and the four the fewest allowed.

Jessica Thomas finished with nine points and a season-high six assists while committing zero turnovers. The junior guard also led all players with four steals, doubling her previous season high. Cornelius concluded the victory second on the team in scoring with a career-high 10 points. She connected on all four of her field goal attempts, including both from beyond the arc.

“I thought Laura Cornelius played the best game of her young career. She’s going to have a great career for us but she was almost flawless,” Meier said, continuing on to compare the Groningen, Netherlands native to Hall of Famer John Stockton in how she operates in the pick and roll.

Sophomore guard Jenny Lindner led the Panthers with 12 points, but Miami held her to two points and zero made field goals in the second half.

All 11 Miami players scored in the victory, the first time that has happened this season. The Hurricanes had a 17-6 edge in assists and a 15-2 advantage in steals to move to 6-0 for the third time in program history.

The Hurricanes will wrap up the Miami Thanksgiving Classic Sunday at 1 p.m. when they host La Salle at the BUC.

·         The Hurricanes have scored exactly 77 points in each of the last three games.

·         The 16-point halftime margin was tied the team’s largest lead at the break so far this season (previous at Loyola Chicago).

·         This marked the first game all season where all 11 eligible Hurricanes scored.

·         After setting a career high with three rebounds in Miami’s last game at Charlotte (11/23/15), Keyanna Harris surpassed it today with five.

·         Khaila Prather tied her career high in points with six and in field goals made with three (both previously done multiple times, both most recently vs. LSU, 12/29/14).