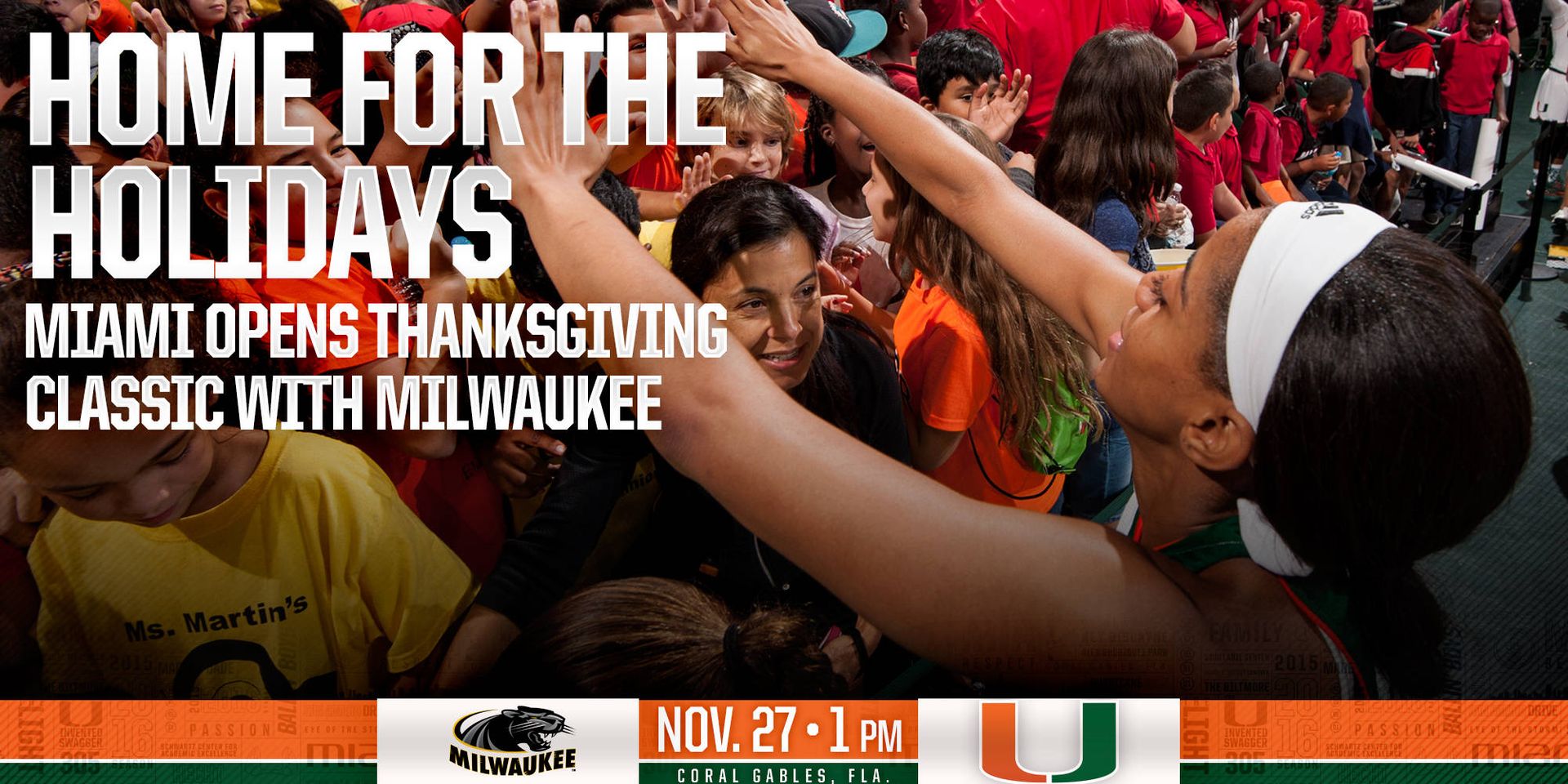 The Game
Miami, receiving votes in both the AP Poll and USA TODAY Coaches Poll, will begin the Miami Thanksgiving Classic Friday against Milwaukee. The game between the Hurricanes and Panthers is set for 1 p.m. at the BankUnited Center. Tickets are $5, with youth 12-and-under admitted free of charge.

The Series
The Hurricanes have won each of the previous two meetings against Milwaukee, most recently topping the Panthers 73-70 on the road in overtime on Nov. 28, 2007.

Meier has guided Miami to 53 victories in ACC play over the past five seasons, the second-most of any team in the conference. The 2010-11 AP National Coach of the Year  is in her 15th season as a head coach, spending the first four at Charlotte, and owns a career record of 264-179, including 188-134 at Miami.

The Opponent
The Panthers have played just two games so far in 2015-16, posting a home victory over UMKC and falling on the road at Florida Atlantic. Milwaukee is coming off a season in which it went 10-20 and posted a 5-11 mark in Horizon League play. The team was picked ninth in the conference preseason poll this year.

Last Time Out
The Hurricanes moved to 5-0 for the fifth time in program history and 3-0 on the road for the seventh time ever with a 77-70 victory at Charlotte Monday. In Meier’s return to the first school she was the head coach at, Miami stormed back from a 12-point third period deficit to earn the win. Motley scored 18 points in the second half and Hof posted a double-double with 11 points and 15 rebounds. The Hurricanes closed the game on a 17-3 run and had a 26-7 edge in bench points.

Up Next
Miami continues play in the Miami Thanksgiving Classic Sunday at 1 p.m. when it hosts La Salle at 1 p.m. Additionally, Milwaukee and La Salle will face each other Saturday at 1 p.m. at the BankUnited Center in game two of the event.

Promotions
As is the case for all women’s basketball games at the BankUnited Center this season, youth 12-and-under will receive free admission. Team posters and schedule cards will be available at the marketing table by the main entrance. Additionally, at halftime, Miami’s football game at Pittsburgh will be shown on the video board at the BUC.