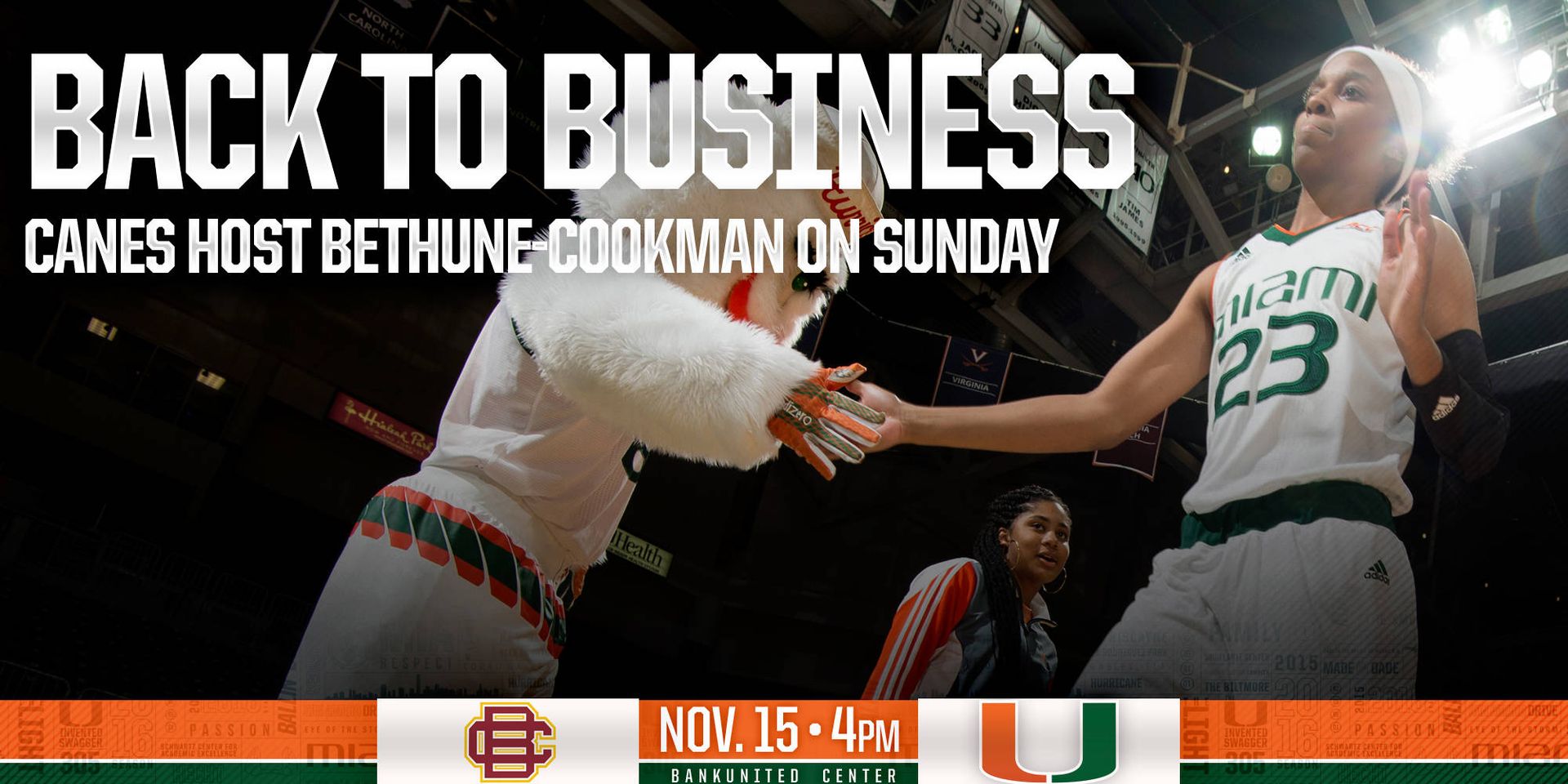 @CanesWBB to Face Bethune-Cookman at the BUC

The Game
The Hurricanes, receiving votes in both the AP Poll and USA TODAY Coaches Poll, are set to wrap up a brief two-game homestand Sunday against Bethune-Cookman. The Hurricanes and Wildcats will square off at 4 p.m. at the BankUnited Center. Tickets are $5, with youth 12-and-under admitted free of charge.

The Series
The Hurricanes have won each of the last five meetings and hold a 7-1 edge in the all-time series against Bethune-Cookman. The teams last met Nov. 18, 2009 and Miami earned an 88-46 victory at the BUC.

Meier has guided Miami to 53 victories in ACC play over the past five seasons, the second-most of any team in the conference. The Wheaton, Ill. native is in her 15th season as a head coach, spending the first four at Charlotte, and owns a career record of 260-179, including 184-134 at Miami.

The Opponent
The Wildcats were picked sixth in the MEAC preseason poll voting and fell 68-61 in their season-opening contest against Brown Friday. They are coming off a 12-21 season in 2014-15 during which they posted a 9-7 record in MEAC play.

Last Time Out
Miami began the regular season with an 80-67 home victory over Wright State, charging back after falling behind 17-4 and outscoring the Raiders by 26 the rest of the way. Four Hurricanes netted over a dozen points, led by 17 from Thomas. Hayes, in her first game back, nearly recorded a double-double, finishing with 14 points and nine rebounds. Woods, on her birthday, set a career high with seven assists to go along with her 14 points and six rebounds, while Motley chipped in with 13 points. The Hurricanes played in front of a record-setting crowd of 4,034, the highest attendance ever at the Miami home game.

Up Next
The Hurricanes open play on the road against Old Dominion Tuesday, Nov. 17 at the Ted Constant Center in Norfolk, Va. The game is scheduled for 7 p.m.

Promotions
As is the case for all women’s basketball games at the BankUnited Center this season, youth 12-and-under will receive free admission. Team posters and schedule cards will be available at the marketing table by the main entrance.

In addition, the Dolphins Cancer Challenge Fall Family Fest will be held on the UM campus prior to the game from 10 a.m. to 4 p.m. A bike ride for participating children will go from 11 a.m. to 1 p.m. for a cost of $15. Those who take part will receive free entry to the basketball game and family members can get tickets for just $3. Additional information on the DCC Fall Family Fest can be found HERE.