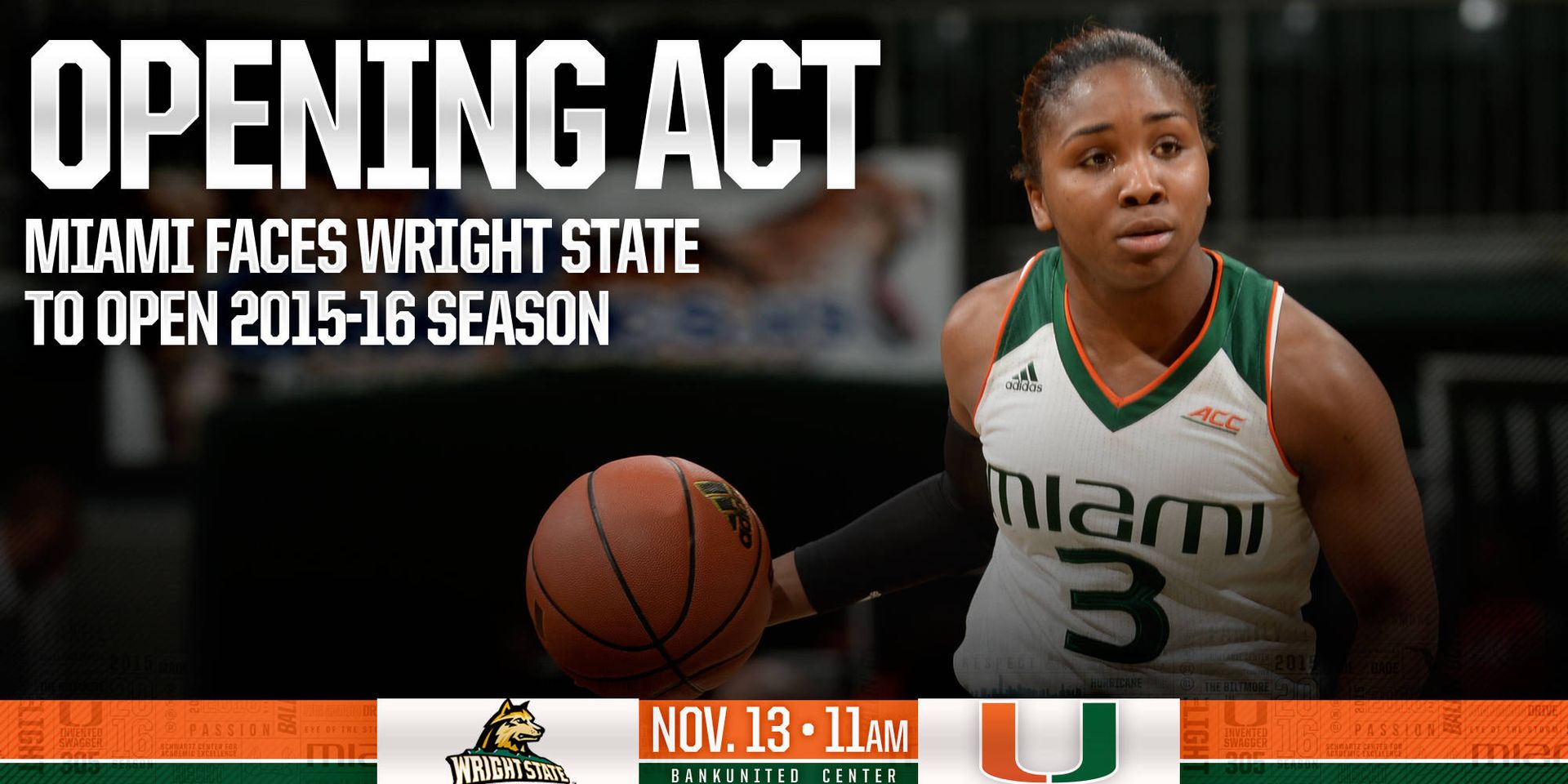 THE GAME
The Hurricanes, receiving votes in both the AP Poll and USA TODAY Coaches Poll, will begin the regular season Friday, Nov. 13 at 11 a.m. when they host Wright State at the BankUnited Center. The game will be elementary school day and nearly 3,000 children are expected to be in attendance. Tickets are $5, with youth 12-and-under admitted free of charge.

THE SERIES
Miami and Wright State have never faced each other before and Friday’s contest will be their first meeting. The Raiders are one of four teams the Hurricanes are scheduled to play for the first time in 2015-16.

THE TEAM
Eight Hurricanes are back from a team that reached the second round of the NCAA Tournament in 2014-15. That group includes a trio of starters who are now the team captains: junior guard Adrienne Motley, a Preseason All-ACC selection, junior guard Jessica Thomas and redshirt senior guard Michelle Woods.

Additionally, Miami welcomes four new players to the fold this season in guard Laura Cornelius, forward/center Emese Hof, forward/center Zada Williams and guard/forward Shaneese Bailey, who will sit out the season as a transfer from Florida Atlantic.

THE COACH
Eleventh-year head coach Katie Meier has led Miami to great heights during her tenure. Since 2009-10, she has directed the program to its greatest six-year stretch ever, making the postseason in all six years, with five 20-plus win seasons and four NCAA Tournament appearances.

Meier has guided Miami to 53 victories in ACC play over the past five seasons, the second-most of any team in the conference. The Wheaton, Ill. native is in her 15th season as a head coach, spending the first four at Charlotte, and owns a career record of 259-179, including 183-134 at Miami.

THE OPPONENT
The Raiders posted a 25-9 record last season, including a 12-4 mark in Horizon League play, en route to a berth in the WNIT. Wright State has won 25-plus games each of the past two seasons.

LAST TIME OUT
The Hurricanes opened play with an exhibition game against Nova Southeastern Nov. 4 at the BUC and rolled to an 83-53 victory. Five different Hurricanes tallied double figures, led by 14 points from Woods and 12 from Motley. Davenport, Hayes and Thomas all chipped in with 11 points apiece and each of the other five Hurricanes made at least one field goal. Miami, which had a 52-12 edge in points in the paint, outscored the Sharks by 14 points in both the first and fourth quarters.

UP NEXT
Miami will wrap up its brief two-game homestand to open the regular season Sunday, Nov. 15 when it hosts Bethune-Cookman. The game between the Hurricanes and Wildcats is scheduled for 4 p.m. at the BankUnited Center.

PROMOTIONS
As is the case for all women’s basketball games at the BankUnited Center this season, youth 12-and-under will receive free admission. Team posters and schedule cards will be available at the marketing table by the main entrance.