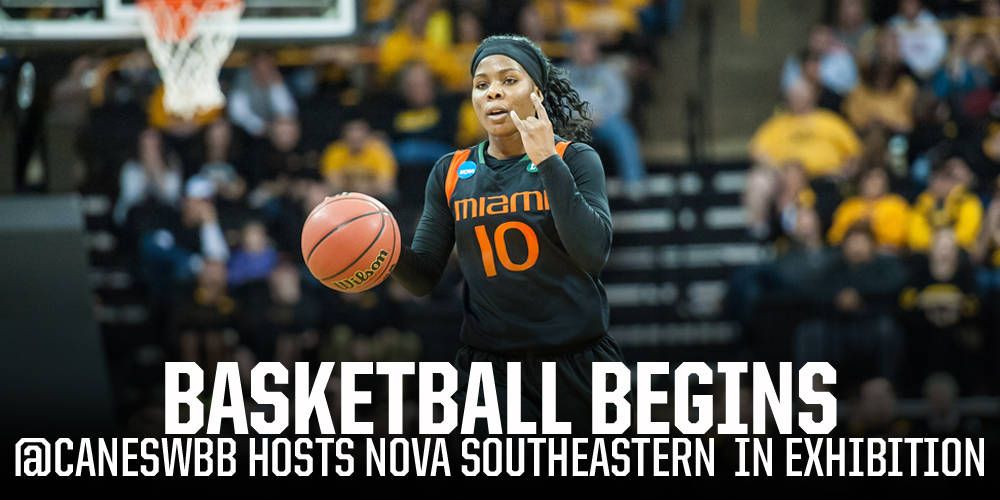 The Game
Miami, picked to finish sixth in the ACC and receiving votes in the preseason USA TODAY Coaches Poll, will square off against Nova Southeastern Wednesday, Nov. 4 at 4 p.m. at the BankUnited Center. The exhibition contest will open the 2015-16 season for both teams.

The Series
The Hurricanes and Sharks have never met in regular season play, but have faced each other in exhibition games in two of the last three years, with Miami winning both times. Last season, the Hurricanes earned a 69-42 victory Nov. 6, 2014 at the BUC.

The Broadcasts
The action will be carried live on ESPN3 and can be found HERE. Kyle Sielaff and Kelly Schumacher will be on the call for the broadcast. The game will also be carried on WVUM 90.5 FM and online at WVUM.org.

Additionally, Miami welcomes four new players to the fold this season in guard Laura Cornelius, forward/center Emese Hof, forward/center Zada Williams and guard/forward Shaneese Bailey, who will sit out the season as a transfer from Florida Atlantic.

Meier has guided Miami to 53 victories in ACC play over the past five seasons, the second-most of any team in the conference. The Wheaton, Ill. native is in her 15th season as a head coach, spending the first four at Charlotte, and owns a career record of 259-179, including 183-134 at Miami.

The Opponent
The Sharks went 27-6 in 2014-15 and advanced to the Elite Eight of the Division II NCAA Tournament for the third-consecutive year. It was also the third season in a row in which Nova Southeastern posted 20-plus victories.

Last Time Out
Miami ended the 2014-15 season in the second round of the NCAA Tournament, falling 88-70 to third-seeded Iowa on its home court at Carver-Hawkeye Arena in Iowa City, Iowa. The Hurricanes, seeded No. 11, were led by 20 points from Thomas, to go along with 18 from Motley and 15 from forward Necole Sterling in the final game of her career. The lead changed hands six times during the course of the game before No. 18/15 Iowa pulled away.

Up Next
The Hurricanes will open the regular season when they host Wright State at the BUC Nov. 13 at 11 a.m.

Promotions
As is the case for all women’s basketball games at the BankUnited Center this season, youth 12-and-under will receive free admission.