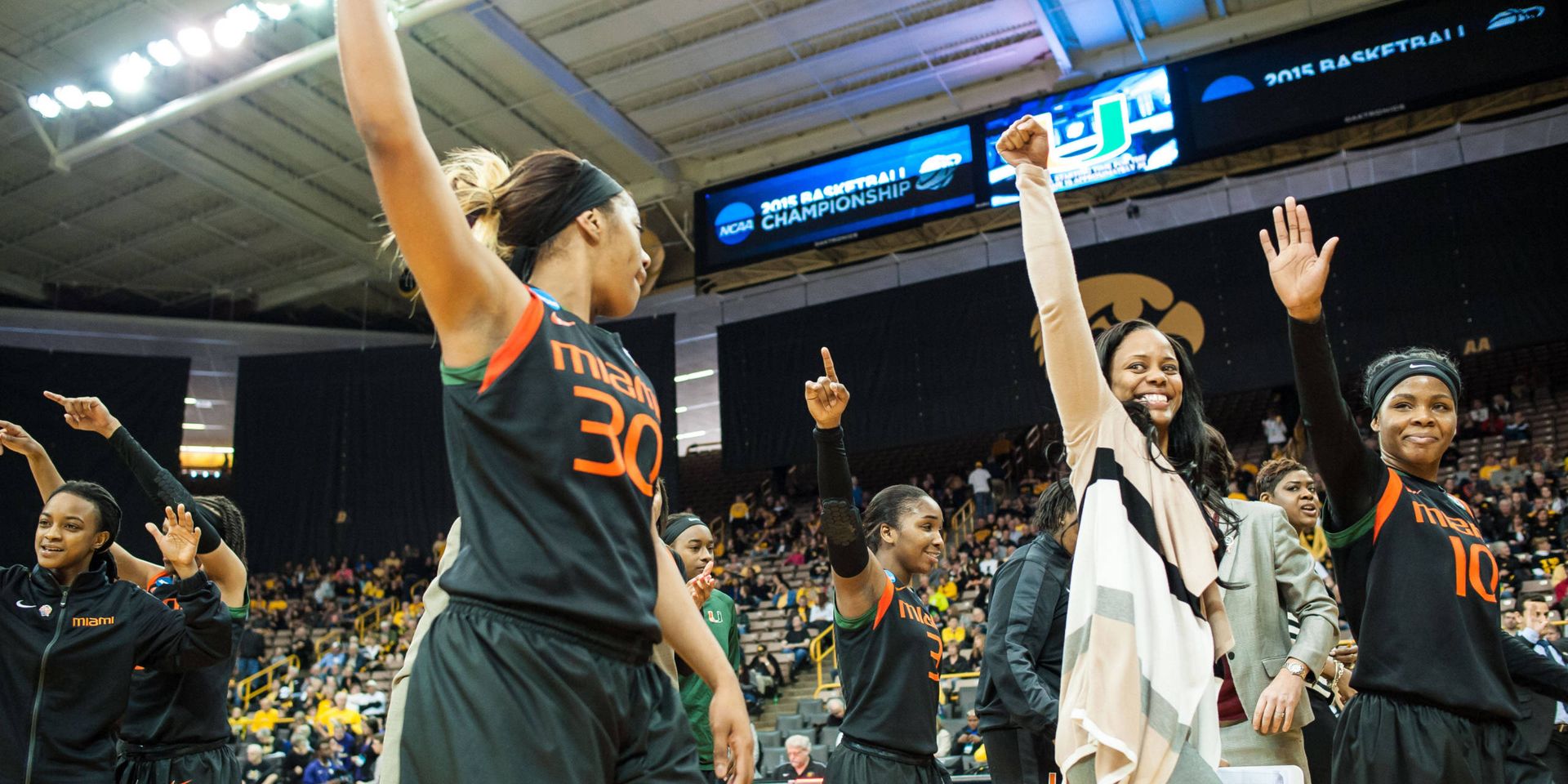 The Game
After winning an NCAA Tournament game for the third time in the last five years, No. 11 seed Miami will now play third-seeded Iowa in the second round. The game will take place on the Hawkeyes’ home court, Carver-Hawkeye Arena, Sunday at 12:00 p.m. ET (11:00 a.m. CT).

The Series
The Hurricanes and Hawkeyes have played three times in the past, with Iowa winning all three meetings. The most recent matchup came during Miami’s last NCAA Tournament appearance, when No. 9 seed Iowa beat the eighth-seeded Hurricanes, 69-53, at Carver-Hawkeye Arena on March 24, 2013.

The Broadcasts
The game will be broadcasted live on ESPN2 and it can also be seen on ESPN3 at this link. Clay Matvick and Katie Smith will be on the call for the game.

WVUM 90.5 FM will carry the action as well and it will also be streamed online at WVUM.org.

A Blue Ribbon Panel and Coaches First Team All-ACC selection, Motley has scored double digits 28 times in 32 games this season and was named both the espnW National Player of the Week and ACC Player of the Week Jan. 12. The Newport News, Va. native is one of two players to start every game this season, along with redshirt senior forward Jassany Williams. Sophomore guard Jessica Thomas has started 31 games and scored a career-high 24 points in the final game of the ACC Tournament.

McGuire has started 26 games this season and is fourth all-time in school history in games played with 126, while senior forward Necole Sterling is a key part of Miami’s frontcourt and has started eight of the last 17 games.

Redshirt freshman guard Nigia Greene and redshirt junior guard Michelle Woods are back after missing the 2013-14 season due to injury and have combined to average 13.7 points, 5.3 rebounds and 2.0 steals per game.

Miami is giving up just 60.1 points per game and has allowed over 71 points just four times all season. The Hurricanes rank fourth in the ACC with a +4.2 turnover margin.

The Coach
Katie Meier is in her tenth year at the helm in Coral Gables, Fla., and is continuing to build upon the team’s many recent successes. The Hurricanes have made six consecutive postseason appearances, four in the NCAA Tournament and two in the WNIT, and have 20-plus wins in five of those seasons. Meier holds a career record of 259-178, including 183-133 at Miami, and is the first coach to lead the Hurricanes to an NCAA Tournament victory in three different seasons.

Last Time Out
The Hurricanes advanced in the NCAA Tournament for the third time in the last five seasons by defeating sixth-seeded Washington, 86-80, in their NCAA Tournament opener Friday at Carver-Hawkeye Arena. Miami, seeded No. 11, was led by 66 points from the backcourt trio of Motley, Thomas and Woods, with all making major contributions defensively as well. Motley poured in a game-high 30 points, the most of any player in the nation on the first day of the NCAA Tournament, and was tabbed with espnW “Performance of the Day” honors. Davenport set a new career best with a game-high 13 rebounds, the most by any Hurricane all season. Miami committed a season-low four turnovers and shot a season-best 58.3 percent (7-of-12) from three-point range. Additionally, the Hurricanes limited the nation’s seventh leading scorer, Kelsey Plum, to 5-of-14 (35.7 percent) shooting.

Up Next
If Miami knocks off Iowa, the Hurricanes would advance to the Sweet 16 for the second time in school history and play in Oklahoma City on Friday, March 27 or Saturday, March 28. Miami would face the winner of the second round game between No. 2 seed Baylor and No. 10 seed Arkansas.