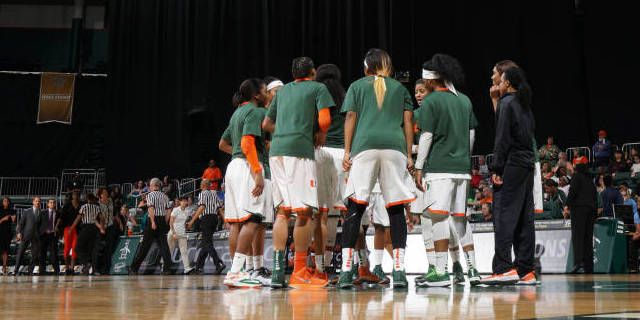 The Game
The eighth-seeded Hurricanes have a bye in the first round of the ACC Tournament, then face ninth-seeded Virginia Thursday, March 5 at 2:00 p.m. in round two at the Greensboro Coliseum.

The Series
Miami has won five of the past six meetings against the Cavaliers and trails 8-6 in the all-time series between the two teams. In this season’s matchup, Miami came back from an early 10-0 deficit to defeat Virginia 67-58 at the BankUnited Center on Jan. 21.

The Broadcasts
The action will be televised live on regional networks, with SUN Sports carrying the contest in South Florida. It can also be seen on ESPN3 at this link (subject to blackout). Mike Hogewood and LaChina Robinson will be on the call for the broadcast.

A Blue Ribbon Panel First Team All-ACC selection, Motley has scored double digits 26 times in 29 games this season and was named both the espnW National Player of the Week and ACC Player of the Week Jan. 12. The Newport News, Va. native is one of two players to start every game this season, along with redshirt senior forward Jassany Williams. Sophomore guard Jessica Thomas has started 28 games, while senior forward Necole Sterling is a key part of Miami’s frontcourt and has started eight of the past 14 games.

Redshirt freshman guard Nigia Greene and redshirt junior guard Michelle Woods are back after missing the 2013-14 season due to injury and have combined to average 14.0 points, 5.2 rebounds and 2.1 steals per game.

Miami is giving up just 59.1 points per game and has allowed over 71 points just twice all season. The Hurricanes rank fourth in the ACC with a +4.6 turnover margin, good for the No. 33 mark in the NCAA.

The Coach
Katie Meier is in her tenth year at the helm in Coral Gables, Fla., and is continuing to build upon the team’s many recent successes. The Hurricanes have made five consecutive postseason appearances, three in the NCAA Tournament and two in the WNIT, and have also had over 20 wins in four of the past five seasons. Meier holds a career record of 257-177, including 181-132 at Miami.

Meier picked up her 250th career victory in Miami’s win over Boston College Jan. 4 and she got the 100th conference victory of her career in the Hurricanes’ win at Virginia Tech Jan. 11. She has guided the Hurricanes to a 53-27 record (.663) in ACC play since the start of the 2010-11 season, the second best mark of the 11 current ACC schools in the conference since then.

Last Time Out
Miami fell to No. 9/8 Florida State in its regular season finale Sunday, March 1 at the BankUnited Center. The Hurricanes went on an 18-5 run in the second half and outscored the Seminoles after the break, but lost 69-55. Motley led all scorers with 20 points, her 10th game with 20-plus points this season. Woods added 12 points and tied her career high with six assists. Williams led the team with six rebounds and had a game-high five blocks, pushing her over 200 in her career and giving her 66 on the season, second best in school history. Miami had 11 steals in the game, forced Florida State into 18 turnovers and held the Seminoles to 3-of-13 (23.1 percent) shooting beyond the three-point line.

Up Next
If the Hurricanes defeat Virginia, they would take on second-ranked and top-seeded Notre Dame in the quarterfinals of the ACC Tournament Friday, March 6 at 2:00 p.m. The Fighting Irish are 34-1 in ACC regular season and ACC Tournament games since joining the conference last season, with a 78-63 loss at Miami on Jan. 8 their only defeat.