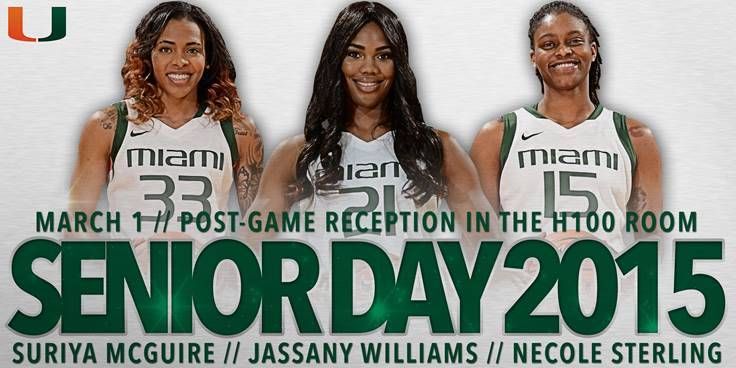 The Game
Miami, receiving votes in the USA Today Coaches Poll for the fifth time this season, will face No. 9/8 Florida State Sunday, March 1 at 3:00 p.m. at the BankUnited Center. The game will serve as senior day for Miami’s Suriya McGuire, Necole Sterling and Jassany Williams and the trio will be honored pregame.

The Series
Florida State has a 36-12 advantage in the all-time series against the Hurricanes. The teams met earlier this season at the Donald L. Tucker Civic Center in Tallahassee, Fla. on Feb. 8 and the Seminoles came away with an 80-60 win.

The Broadcasts
The game will be televised live on regional networks, with SUN Sports carrying the contest in South Florida. It can also be seen on ESPN3 at this link (subject to blackout). Mike Hogewood and Christy Winters-Scott will be on the call for the broadcast.

A native of Newport News, Va., Motley has scored at least 13 points 23 times in 28 games this season and was named both the espnW National Player of the Week and ACC Player of the Week Jan. 12. Motley is one of three players to start every game this season, along with redshirt senior forward Jassany Williams and sophomore guard Jessica Thomas. Senior forward Necole Sterling is a key part of Miami’s frontcourt and has started seven of the past 13 games.

Redshirt freshman guard Nigia Greene and redshirt junior guard Michelle Woods are back after missing the 2013-14 season due to injury and have combined to average 13.9 points, 5.3 rebounds and 2.1 steals per game.

Miami is giving up just 58.8 points per game and has allowed over 71 points just twice all season. The Hurricanes rank fourth in the ACC with a +4.6 turnover margin, good for the No. 32 mark in the NCAA (through Feb. 26).

The Coach
Katie Meier is in her tenth year at the helm in Coral Gables, Fla., and is continuing to build upon the team’s many recent successes. The Hurricanes have made five consecutive postseason appearances, three in the NCAA Tournament and two in the WNIT, and have also had over 20 wins in four of the past five seasons. Meier holds a career record of 257-176, including 181-131 at Miami.

Meier picked up her 250th career victory in Miami’s win over Boston College Jan. 4 and she got the 100th conference victory of her career in the Hurricanes’ win at Virginia Tech Jan. 11. She has guided the Hurricanes to a 53-26 record (.671) in ACC play since the start of the 2010-11 season, the second best mark of the 11 current ACC schools in the conference since then.

Last Time Out
The Hurricanes lost on a buzzer beat at Wake Forest Thursday, Feb. 26, falling 60-59. Demon Deacons freshman guard Amber Campbell had her shot go through the net with the clock showing triple zeroes. Despite the defeat, Motley was superb for Miami, posting a game-high 19 points on 50 points and tying for the team lead with three assists. Motley also set a career high with four three-pointers made. The Hurricanes held Wake Forest’s Dearica Hamby, the third leading scorer in the ACC, to nine points on 3-of-15 (20 percent) shooting in the game.

Up Next
Its regular season complete after facing Florida State, Miami’s next stop will be Greensboro, N.C. for the Atlantic Coast Conference Tournament. The Hurricanes have already clinched a first round bye and will play their first game Thursday, March 5, with the time and opponent still to be determined.

Promotions
As is the case for all games this season, youth 12-and-under will receive free admission. The pregame ceremony honoring Miami’s senior class of Suriya McGuire, Necole Sterling and Jassany Williams will take place at 2:40 p.m.