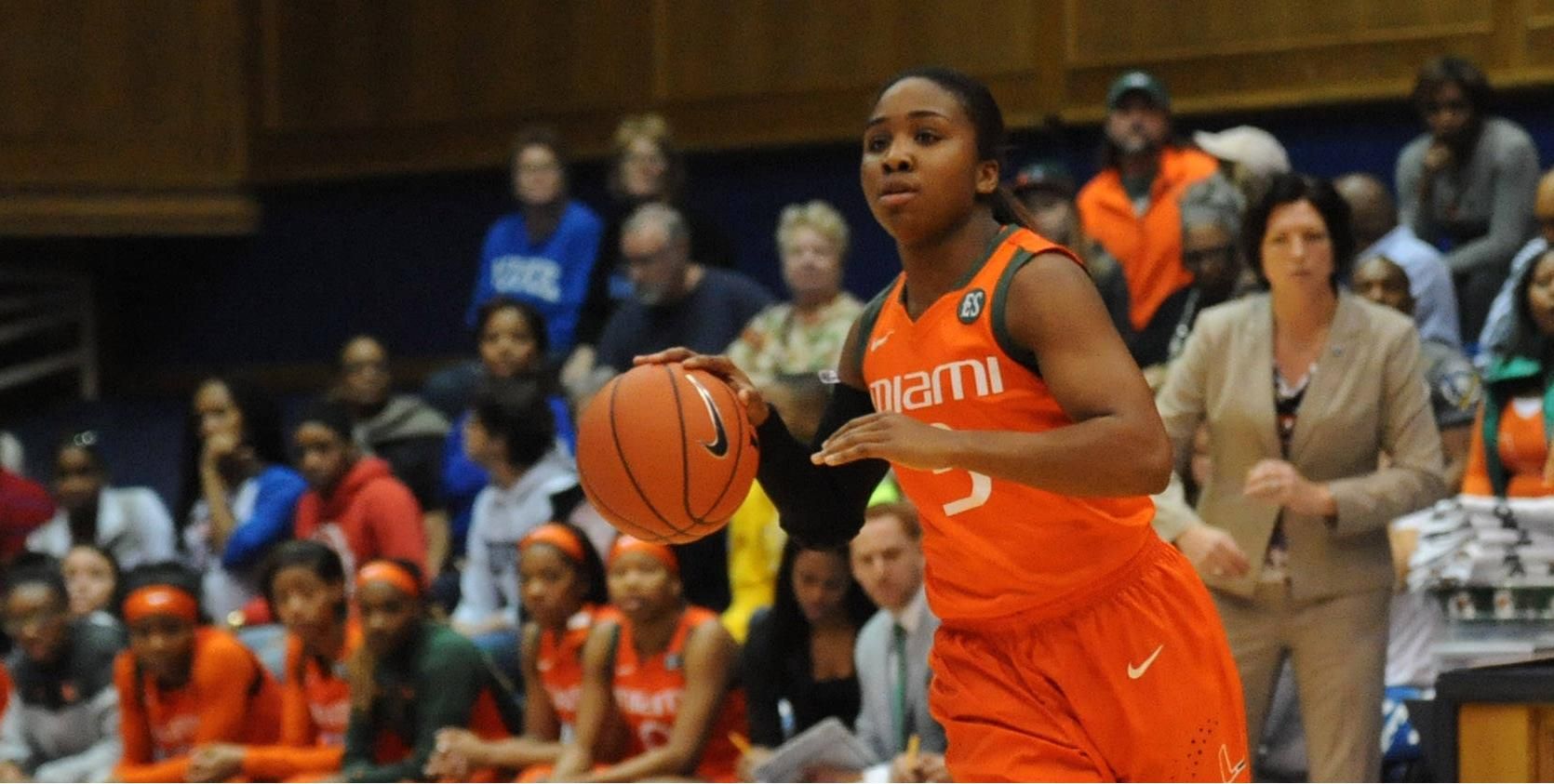 The Game
Miami, receiving votes in both the USA Today Coaches Poll and the AP Poll, takes on NC State Thursday, Feb. 19 at 7:00 p.m. at the Reynolds Coliseum in Raleigh, N.C.

The Series
Although the Hurricanes trail 9-8 in the all-time series against the Wolfpack, Miami has won each of the past seven meetings. Most recently, the Hurricanes defeated NC State 80-71 at the BankUnited Center last season on Jan. 19, 2014.

The Broadcasts
WVUM 90.5 FM will carry the game and it will also be streamed online at WVUM.org. Live video will be available via GoPack All-Access.

The Team
Head coach Katie Meier has eight players back on the roster from the 2013-14 season, inclduing starters Suriya McGuire, a senior guard, and Adrienne Motley, a sophomore guard. Junior forward Keyona Hayes started last season, but has yet to play in 2014-15 due to injury.

A native of Newport News, Va., Motley has scored at least 14 points 20 times in 25 games this season and was named both the espnW National Player of the Week and ACC Player of the Week Jan. 12. Motley is one of three players to start every game this season, along with redshirt senior forward Jassany Williams and sophomore guard Jessica Thomas. Senior forward Necole Sterling is a key part of Miami’s frontcourt and has started seven of the past 10 games.

Redshirt freshman guard Nigia Greene and redshirt junior guard Michelle Woods are back after missing the 2013-14 season due to injury and have combined to average 13.5 points, 5.4 rebounds and 2.2 steals per game thus far.

Miami, No. 41 in the RPI, is allowing just 58.0 points per game and has allowed over 71 points just twice all season. The Hurricanes are third in the ACC with a +5.0 turnover margin, good for No. 27 in the NCAA.

The Coach
Katie Meier is in her tenth year at the helm in Coral Gables, Fla., and is continuing to build upon the team’s many recent successes. The Hurricanes have made five consecutive postseason appearances, three in the NCAA Tournament and two in the WNIT, and have also had over 20 wins in four of the past five seasons. Meier holds a career record of 257-173, including 181-128 at Miami.

Meier picked up her 250th career victory in Miami’s win over Boston College Jan. 4 and she got the 100th conference victory of her career in the Hurricanes’ win at Virginia Tech Jan. 11. She has guided the Hurricanes to a 53-23 record (.697) in ACC play since the start of the 2010-11 season, the second best mark of the 11 current ACC schools in the conference since then.

Last Time Out
Miami mounted a furious comeback to defeat Georgia Tech at the BankUnited Center Sunday, Feb. 15. The Hurricanes trailed 59-49 with 4:46 left after a 10-0 run by the Yellow Jackets, but did not allow a point the rest of the way. Miami closed the game on a 15-0 run over the final 4:17 to win 64-59. Adrienne Motley led all scorers with 18 points, while Michelle Woods scored 13, including 10 in the final four minutes. Woods hit the go-ahead three-pointer with 33 seconds left after Jassany Williams grabbed her third offensive rebound of the possession and found her open beyond the arc.

The Hurricanes held Georgia Tech sophomore guard Kaela Davis, the third leading scorer in the ACC, to 13 points on 6-of-18 shooting. Miami forced 23 turnovers in the win and outscored the Yellow Jackets 21-4 in points off turnovers. A game recap, highlights and Coach Meier’s postgame interview can be found here.

Up Next
The Hurricanes return home to face No. 17/14 North Carolina Sunday, Feb. 22 at the BankUnited Center at 3:00 p.m. All Girl Scouts in attendance will be invited to participate in a free clinic after the game.