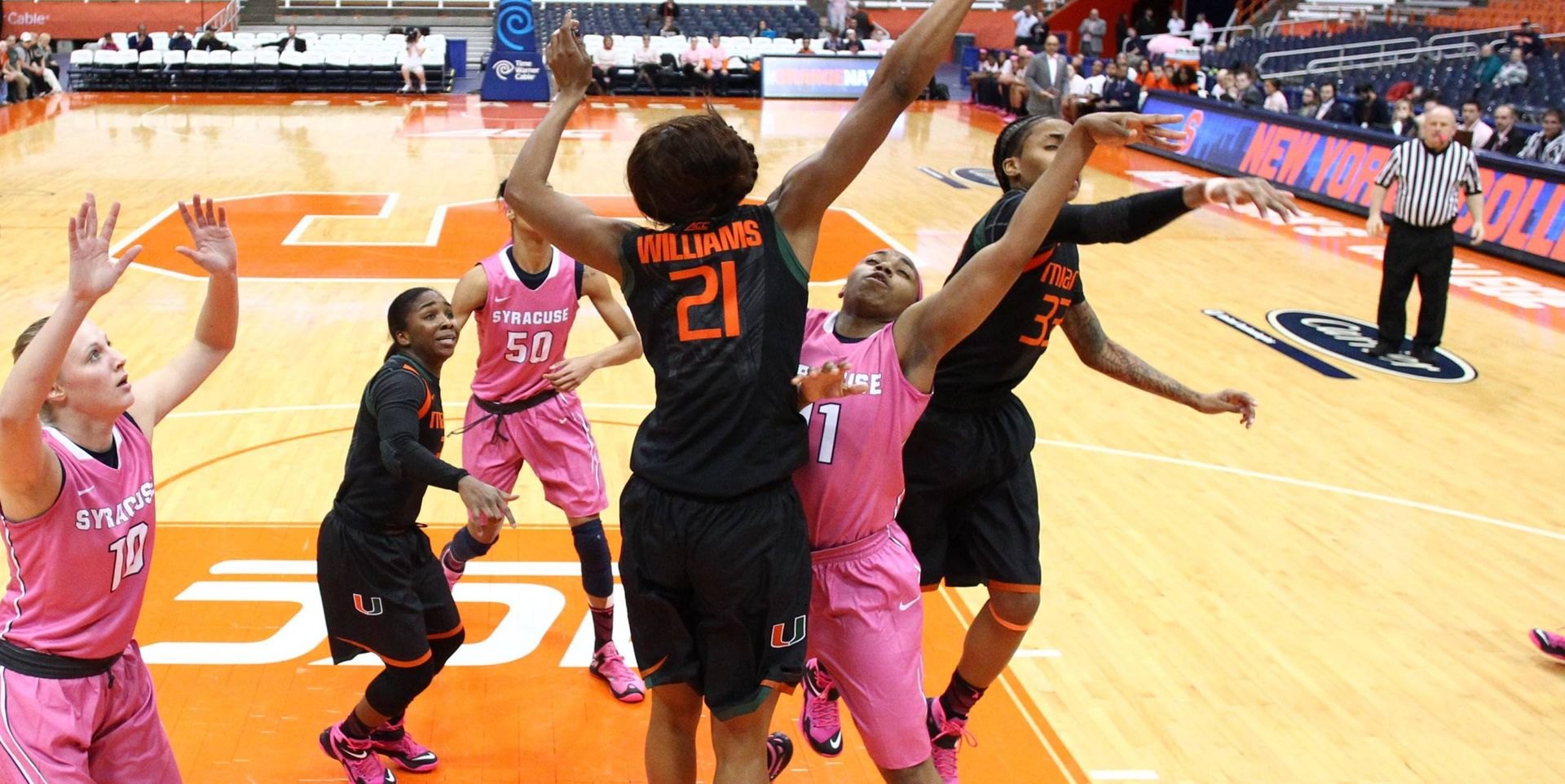 SYRACUSE, N.Y. – The University of Miami picked up a signature road win and earned its second double-digit victory over a top 25 team in ACC play Thursday night as it defeated No. 23/22 Syracuse 85-71 at the Carrier Dome.

Miami’s matchup with Syracuse marked the second ranked team the Hurricanes’ have faced on the road in five days.

“We have this attitude and I could just feel it, I just thought we were a little bit tougher and grittier today than we’d been on our other road trips, way more business-like,” Miami head coach Katie Meier said. “But the team had great chemistry and that is incredibly important midseason and towards the stretch run is [whether] your team is enjoying each other and we really were on this trip. It was great.”

The Hurricanes largely controlled play in the first half, but the contest remained close throughout the opening 20 minutes.

Miami (17-7, 7-4 ACC) received a huge boost off the bench from freshman forward Keyanna Harris, who had five points in the first eight and half minutes, more than she had scored in all but one game this season.

“She’s been playing great and she’s been really all about the team and she’s been very competitive in practice and she just seemed to have a good attitude and . . . she was really impressive and very composed,” Meier said.

Harris was not the only freshman forward who stood out in the opening frame, as classmates Erykah Davenport and Khaila Prather both impressed in the paint as well.

Davenport tied for the team lead in both points and rebounds at halftime with eight and three respectively. Prather made her lone field goal attempt on a stellar finish and had two rebounds at the break.

The freshman trio combined for 15 points in the first half and helped Miami outscore the Orange 28-14 in the paint as well as 19-6 in bench points. Two other bench points also came from a freshman, as guard Nigia Greene, a redshirt freshman, had a backcourt steal that she turned into a bucket.

“All week we’ve just really been emphasizing how the team needed to be who they are,” Meier said. “Don’t play outside yourself, don’t do anything spectacular, but if you’re . . . supposed to crash the glass like Khaila Prather, then go crash the glass. If you’re Erykah Davenport you’re supposed to score inside, [then go] score inside. And so it was just kind of a re-check, a re-definition of the roles.”

Senior guard Suriya McGuire added eight points in the opening frame for the Hurricanes, who scored the final four points of the half to take their largest lead of the game into the locker room. It was 35-25 Miami at the intermission.

The second half began with back-and-forth action, but Miami took control of the game during a stretch of 61 seconds that included a trio of three-pointers by the Hurricanes.

McGuire, who had her most points in ACC play this season with a team-high 17, extended Miami’s lead to 17, 60-43, under a minute later.

“She’s just been tremendously calm, really positive,” Meier said of McGuire. “I think she hit the reset button after the Pittsburgh game, completely, and we had some great conversations. She’s been really a good person and she’s been a great senior and we’re having a blast together and I think it quite possibly could be the story of our finish here, is Ray playing well.”

After taking the large lead, the Hurricanes would not let Syracuse (17-8, 7-5 ACC) back within striking distance.

All 10 healthy Hurricanes scored in the victory. Redshirt junior guard Michelle Woods posted 15 points and shot 13-of-15 at the free throw line, both career highs. She also led the team with six rebounds.

“It was incredible,” Meier said of Woods’ free throw shooting performance. “Usually we’re going to Mot and JT, but it was crazy because Chelley is a great inbounder and so we needed her composure to inbound the ball and then we were trying to get it back to her so that she could get to the line. But she was steady Eddie and it’s a good thing.”

Syracuse sophomore guard Alexis Peterson paced Syracuse with 21 points, while junior guard Brianna Butler added 19 for the Orange. Miami held both players to 8-of-20 shooting though.

The Hurricanes are back in action Sunday, Feb. 15 at 3:00 p.m. when they host Georgia Tech at the BankUnited Center.