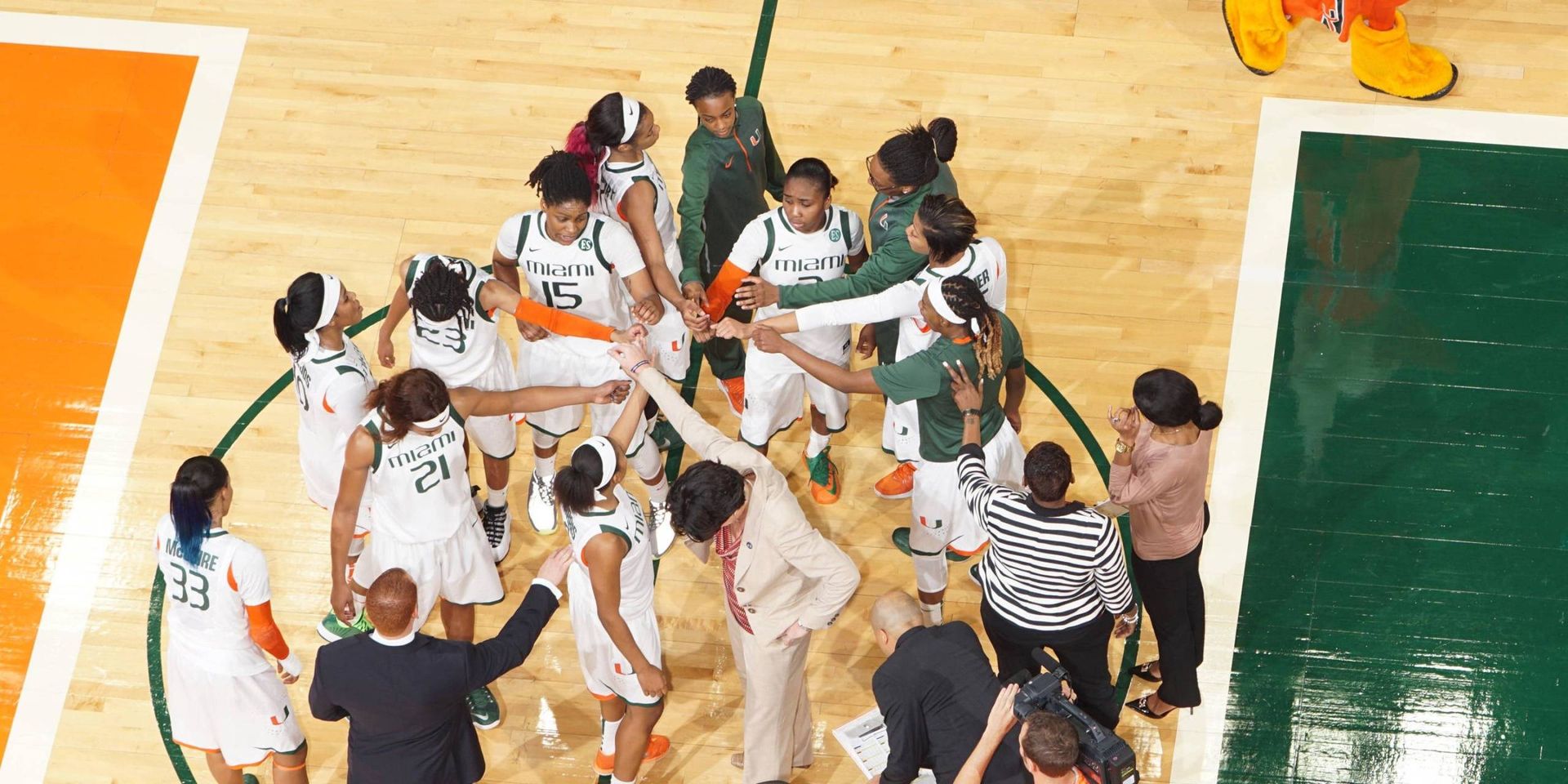 The Game
The Hurricanes will play the last of five straight Sunday road games Feb. 8 at 2:00 p.m. against No. 9/8 Florida State at the Donald L. Tucker Civic Center in Tallahassee, Fla.

The Series
Miami trails 35-12 in the all-time series against the Seminoles. The three meetings last season were decided by a total of 13 points, the most recent of which was a 72-67 overtime victory for Florida State in the ACC Tournament in Greensboro, N.C. March 6, 2014. In the last regular season matchup, Miami won 76-73 at Florida State Feb. 16, 2014.

The Broadcasts
The game will be televised live on ESPN3 with Tom Block and Melissa Bruner on the call. The broadcast can be found by clicking here.

A native of Newport News, Va., Motley has scored at least 15 points 17 times this season and was named both the espnW National Player of the Week and ACC Player of the Week Jan. 12. Motley is one of three players to start every game this season, along with redshirt senior forward Jassany Williams and sophomore guard Jessica Thomas. Senior forward Necole Sterling is a key part of Miami’s frontcourt and has started each of the past seven games.

Redshirt freshman guard Nigia Greene and redshirt junior guard Michelle Woods are back after missing the 2013-14 season due to injury and have combined to average 13.0 points, 5.3 rebounds and 2.2 steals per game thus far.

Miami leads the Atlantic Coast Conference in scoring defense at 56.4 points per game and also ranks top three in the ACC in steals per game (10.3) and turnover margin (+5.5).

The Coach
Katie Meier is in her tenth year at the helm in Coral Gables, Fla., and is continuing to build upon the team’s many recent successes. The Hurricanes have made five consecutive postseason appearances, three in the NCAA Tournament and two in the WNIT, and have also had over 20 wins in four of the past five seasons. Meier holds a career record of 255-172, including a record of 179-127 at Miami.

Meier picked up her 250th career victory in Miami’s win over Boston College Jan. 4 and she got the 100th conference victory of her career in the Hurricanes’ win at Virginia Tech Jan. 11. She has guided the Hurricanes to a 51-22 record (.699) in ACC play since the start of the 2010-11 season.

Last Time Out
The Hurricanes played their first home game in over two weeks Thursday, Feb. 5 and put forth a stellar defensive display. Miami limited Virginia Tech to 39 points in a victory at the BankUnited Center to move to 6-3 in ACC play. Adrienne Motley led all scorers with 16 points in the 42-39 win, while Michelle Woods had eight points and team-high eight rebounds to tie her career best. Miami held the Hokies to eight points in the first half and their leading scorer, freshman guard Rachel Camp, finished the game without a point for the first time all season. Virginia Tech’s 39 points and 24.2 field goal percentage were both season lows.

Up Next
Miami will hit the road again to face Syracuse at the Carrier Dome Thursday, Feb. 12 at 7:00 p.m. It will be the Hurricanes’ first non-Sunday ACC away game of the season.