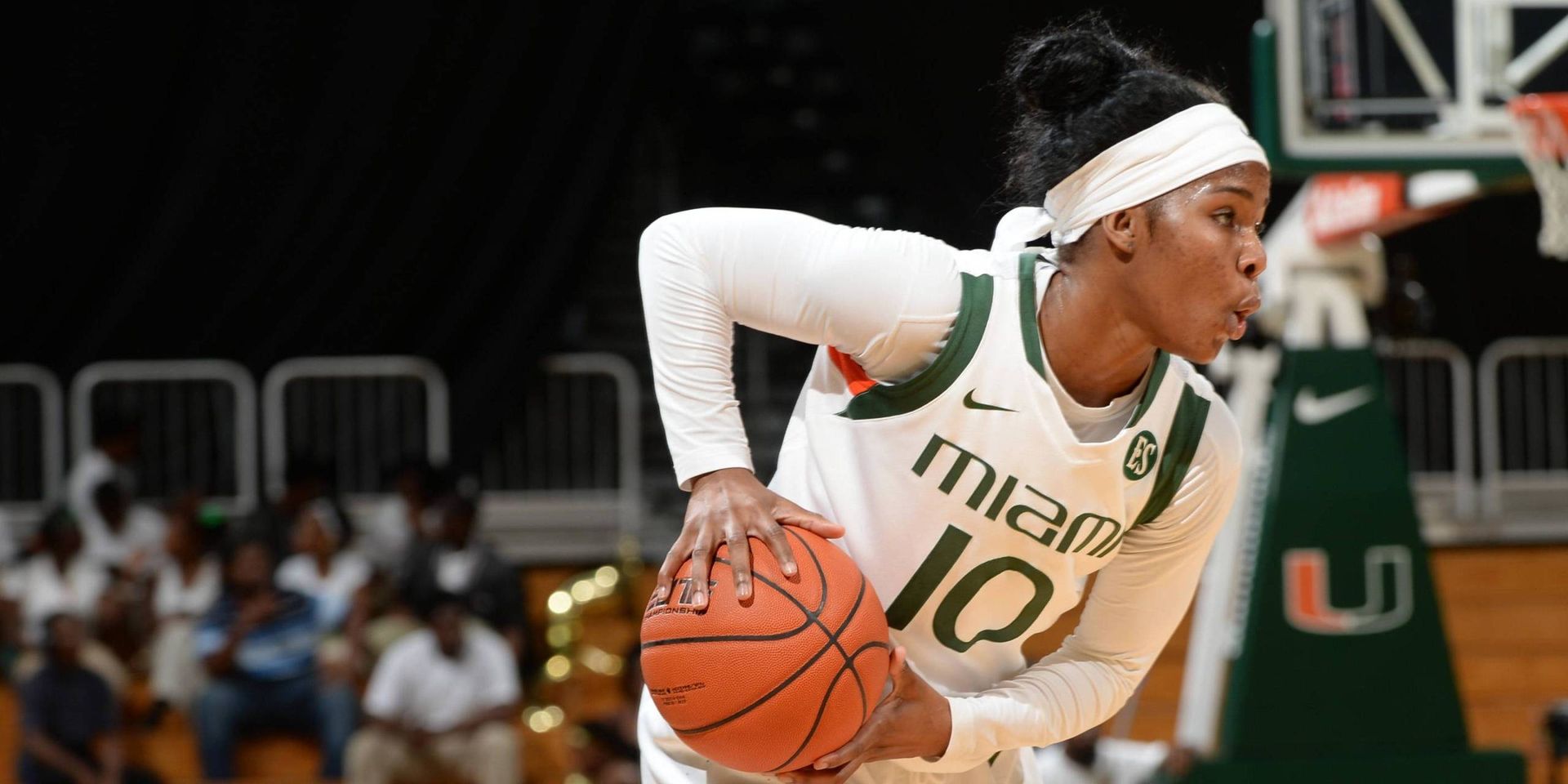 The Game
Coming off a 78-63 win over fourth-ranked Notre Dame, Miami will face the Virginia Tech Hokies Sunday, Jan. 11 at 2:00 p.m. from Cassell Coliseum in Blacksburg, Va.

The Series
The Hurricanes lead 12-6 in the all-time series with the Hokies. Miami has won six in a row and the most recent matchup was a 64-62 victory at Virginia Tech last season on Jan. 12, 2014. The two teams will meet again later this season, as Miami will host the Hokies Feb. 5 at the BankUnited Center.

The Broadcasts
WVUM 90.5 FM will broadcast the game as well and it will also be streamed online at WVUM.org. Live video will be available for free via Hokies Xtra.

A native of Newport News, Va., Motley has scored at least 16 points in 12 of 15 games this season. She is one of three players to start every game this season, along with redshirt senior forward Jassany Williams and sophomore guard Jessica Thomas. Forward Necole Sterling is a key part of Miami’s frontcourt off the bench is one of three seniors on the team.

Redshirt freshman guard Nigia Greene and redshirt junior guard Michelle Woods are back after missing the 2013-14 season due to injury and have combined to average 13.3 points, 5.5 rebounds and 2.7 steals per game thus far.

Additionally, the Hurricanes have five new faces this year, featuring a mix of local, national and international talent. Miami’s newcomers are all freshmen and consist of forwards Erykah Davenport, Keyanna Harris, Khaila Prather, and Laura Quevedo, as well as guard Aisha Edwards. Quevedo has started 13 straight games and is averaging 5.9 points and 4.8 rebounds on the season.

Miami is second in the Atlantic Coast Conference and top 30 in the NCAA in scoring defense, allowing just 56.0 points a game. The Hurricanes are atop the ACC in steals per game, averaging 11.9 per contest, which is in the top 20 in the NCAA.

The Coach
Katie Meier is in her tenth year at the helm in Coral Gables, Fla., and is looking to build upon the team’s many recent successes. The Hurricanes have made five consecutive postseason appearances, three in the NCAA Tournament and two in the WNIT, and have also had over 20 wins in four of the past five seasons. Meier holds a career record of 251-169, including a record of 175-124 at Miami.

Meier picked up her 250th career victory Jan. 4 with a 74-53 win over Boston College. Against Virginia Tech, Meier will be trying for the 100th conference win of her career, as she posted 36 while the head coach at Charlotte and has 63 at Miami, including 47 since the start of the 2010-11 season.

Last Time Out
Miami recorded one of the biggest wins in program history Thursday, Jan. 8, defeating the fourth-ranked Notre Dame Fighting Irish 78-63 at the BankUnited Center. It was the first win over a team ranked in the top four of the AP Poll in program history and snapped Notre Dame’s NCAA record-tying 30-game road winning streak. Miami was led by Adrienne Motley’s career-high 32 points on 13-of-19 shooting, with the 13 field goals also a career best for the sophomore and tied for the most by any ACC player this season.

Additionally, Motley set a career high with 10 free throw attempts, matched her career best with 36 minutes played and equaled her season high with seven rebounds. She even added in a team-high four assists with just one turnover. Jassany Williams shined in the win as well, setting a school record with nine blocks in the game, six coming in the final six minutes. Williams also tied for the team lead with eight rebounds. Suriya McGuire pulled down eight rebounds too and she added 11 points in the win.

Up Next
The Hurricanes will be back at the BankUnited Center Thursday, Jan. 15 and will be host the Clemson Tigers at 7:00 p.m. The game will be televised on ESPN3.