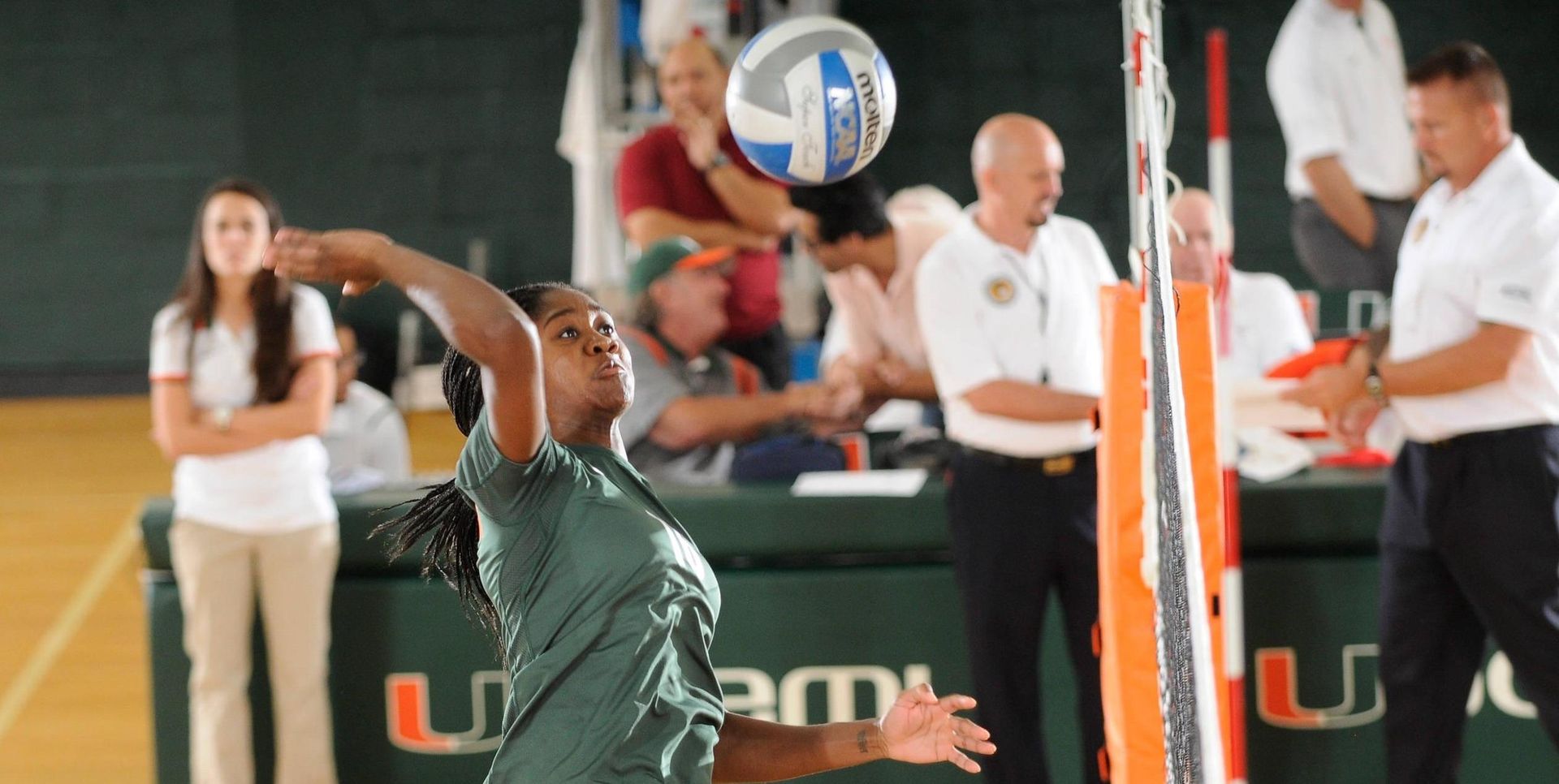 The Canes (18-11, 11-8 ACC) took a 1-0 lead in the match thanks to a productive first set from its attack. Emani Sims led Miami with five kills in the set, while Alex Johnson and Alexis Mourning each added three kills. Blair Fuentez, Savanah Leaf and Ryan Shaffer each had a service ace in the first set victory.

“Every week we are trying to play the best we can to win some games,” Miami head coach Jose “Keno” Gandara said. “It’s nice to be at home and we expect to finish strong. We’re at the point where we are trying to sustain a level of play. It was a good match.”

The Yellow Jackets bounced back with a 25-16 win in the second set thanks to a big performance from Jennifer Percy and Courtney Felinski, whom combined for 10 kills in the set.

Miami rallied back from an 8-4 deficit to tie the match at 11. The two teams battled back and forth to tie the set at 17, but Miami would score eight of the final nine points to take the third set, 25-18, and gain a 2-1 advantage in the match.

The Hurricanes opened the fourth set on a 5-0 run capped by an ace from Caitilin Donahoe. But the Yellow Jackets would not go down without a fight, cutting Miami’s lead to one, 13-12. The Canes would slow Georgia Tech’s momentum, taking six of the next eight points to take a 19-14 lead. Miami continued to fend off the Yellow Jackets, winning the fourth set 25-18.

“Those guys put pressure on us,” Gandara said. “Game 2 was tough on us, but in Games 3 and 4 we sustained it and I liked that.”

Miami’s attack was balanced, with Leaf and Sims each collecting 12 kills while Johnson and Misty Ma’a turned in nine kills apiece.

Leaf turned in a double-double, pairing her 12 kills with 13 digs. Sims, who led Miami with six blocks, was the Canes’ most efficient hitter at .320.

Setters Blair Fuentez and Caitilin Donahoe combined to for 41 assists. Fuentez tallied 18 over the first two sets, while Donahoe closed out the final two sets with 23 assists.

Shaffer led Miami with 20 digs, increasing her career total to 2,077 heading into the final match of the 2013 regular season. The Hurricanes will honor Shaffer, as well as Johnson and Julia Giampaolo, in a Senior Night ceremony prior to the 7 p.m. match against Clemson.

Friday’s match will be the final one at the Knight Sports Complex this season. Canes fans who purchase a women’s basketball ticket for Friday’s 1 p.m. game against St. Francis Brooklyn will be able to enter the volleyball match at 7 p.m. with their ticket stub from women’s basketball.