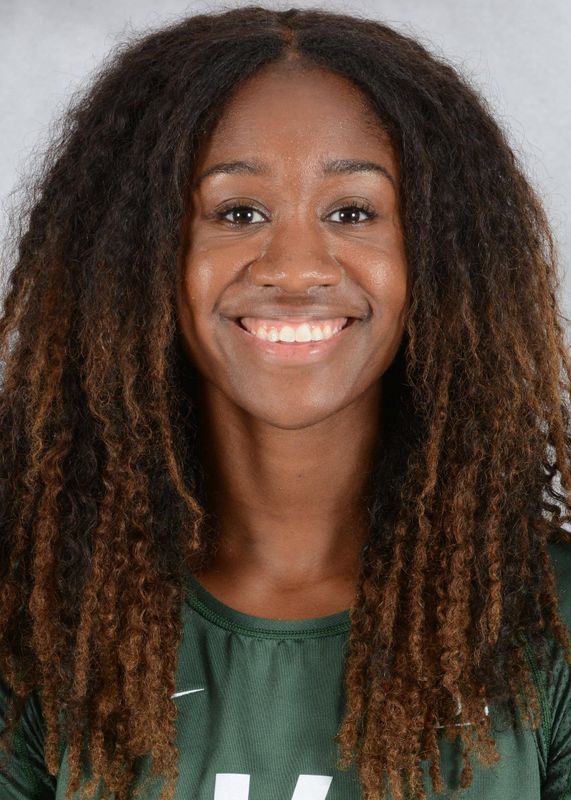 2014 (Senior): Started all 31 matches, appearing in 109 sets … Led Miami with a .372 attack percentage that ranked fourth in the ACC … Team leader in blocks with 136 (17 solo) … Ranked fourth on the team with 226 kills … 16 services aces were third-most on 2014 squad … Her 318 points (2.92/set) were second-best on the Canes … Finished career as all-time leader in attack percentage (.339) and block assists (491), while ranking second in UM history in total blocks (554) … Recorded season-high 16 kills and assisted on five blocks in victory over Ball State … Tallied season-best 12 blocks, eight kills, five digs, and one assist in the victory against Boston College … Hit a season-high .733 while amassing 11 kills and four blocks (one solo) in win over Georgia Tech … Had three kills and team-high three blocks in first round NCAA Tournamnet win over UCF … Recorded five kills and three blocks in second round match vs. No. 8 Florida

2011 (Redshirt Freshman): Started all 31 matches… finished the season with 215 kills and 105 blocks … had 10 or more kills on seven occasions … blocked five or more attacks six times throughout the season … had a season-high nine blocks in the Tiger Classic against LSU (Aug. 27) and in the Florida State (Nov. 26) victory while amassing a season-high 14 kills … tallied 13 kills and four blocks to beat Boston College … registered 12 kills, three block assists and a season-high three digs against North Carolina (Nov. 4) … racked up 11 kills and two block assists to sweep NC State (Nov. 6) … helped the Hurricanes beat Wake Forest (Nov. 12) on the road with 10 kills and five digs … picked up seven digs and 13 kills at Georgia Tech (Nov. 18) … had 12 kills and five digs in five match loss to Clemson.

High School: A three-sport student-athlete for Glenbrook South High School … participated in basketball, track & field, as well as volleyball … did not play volleyball at Glenbrook until her sophomore year … played club level for Edge Volleyball of Des Plaines, Ill. … a powerful middle blocker that helped lead her high school team to a third place finish in the Division 4-A State Tournament during the 2009 season … led players from all 16 state tournament teams represented by all divisions (1-A through 4-A) in hitting percentage, carrying a .513 clip throughout the tournament … ranked second in her division during the season in hitting percentage, while ranking 15th in kills … named to the Central Suburban League All-Conference Team in 2009 … earned Scholar-Athlete accolades that same season … All-State honorable mention by the Chicago Tribune … turned in 238 kills and 69 blocks as a senior … ranked as a Top 100 Senior Ace as a senior.

Personal: Full name is Emani Brenita-Rae Sims … Daughter of Brendy and Bonnie Sims … Has one sister, Tiffany … Earned her bachelor’s degree in advertising in May 2014 … Working towards a master’s degree in public relations.