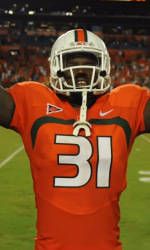 After his selection to the second team as a junior, Sean Spence earned First-Team All-ACC recognition for his spectacular 2011 season. The senior captain, who tied for fifth place in the Atlantic Coast Conference with 106 total tackles in 2011, ended the year second among all NCAA players with 47 career tackles for loss, including 14.0 in 2011. A semifinalist for the Butkus Award, Spence averaged 9.64 tackles per game (fourth in conference) and 1.27 tackles for loss per game (third in conference) in 2011. The Miami, Fla. native also finished the season with three sacks, one pass break-up and one forced fumble.

Senior captain Tyler Horn earned Second-Team All-ACC recognition for his play at center for the Hurricanes. As the anchor of the offensive line, Horn, who played 750 snaps in 2011 and only allowed two sacks, led the Hurricane linemen with a grade of 90% for the season. A two-year starter for Miami at center, the Memphis, Tenn. native made only 22 mental errors on the season and recorded a finish grade of 96%.

Sophomore running back Lamar Miller, who completed one of the most prolific seasons in program history in 2011, also earned recognition on the All-ACC Second Team. Miller, whose 1,272 yards ranked third in program history for a single season, finished the year with nine rushing touchdowns and one receiving TD. The Miami, Fla. native finished second in the conference with 106 rushing yards per game, recording seven 100-yard games and averaging 5.6 yards per carry.