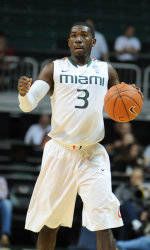 Miami (11-3) never trailed as Grant hit three early 3-pointers to help the Hurricanes build a 27-13 lead with 8:43 remaining in the first half.

Miami responded with 12 points behind 3-pointers from Durand Scott and Adrian Thomas. Thomas’ 3-pointer with 49 seconds left in the half increased the Hurricanes’ lead to 43-23.

Grant was one of four Hurricanes who scored in double figures. Scott finished with 15 points and Reggie Johnson scored 12 points and grabbed a career-high 15 rebounds. Erik Swoope scored 11 of his 13 points in the second half.