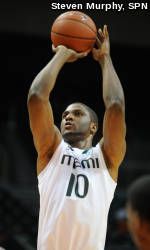 Hurricanes & Rutgers Square Off at Noon on SNY

CORAL GABLES, FLA. – The University of Miami men’s basketball team returns to the road for the second time this week to take on former Big East rival Rutgers on Sun., Nov. 21, at 2 p.m. The game will be broadcast in the New York market on SNY and in the Philadelphia market on The Comcast Network (TCN), and will be available on all cable/satellite packages that carry SNY. The game is also on radio on 560 WQAM and via online broadcast at WQAM.com.

Sunday’s game is in the midst of a four-game stretch over eight days for the Hurricanes– including a pair of contests on the road. Miami departed for New Jersey immediately after Friday’s 88-65 home win over North Carolina Central.

A rested Rutgers (1-1) returns to the hardwood following Monday’s 68-53 home victory over Fairfield.

The Hurricanes lead the all-time series versus the Scarlet Knights, 8-4, although the programs have not met since UM departed the Big East following the 2003-04 season. However, Frank Haith’s Hurricanes have faced a Mike Rice-coached squad, defeating Robert Morris, 70-62, on Dec. 14, 2008 in Coral Gables.

Seventh-year head coach Frank Haith and the Hurricanes have defeated 23 of its last 24 non-conference opponents during the regular season. Miami had won 22-straight until Monday’s 72-68 loss at No. 19 Memphis, in a game that tipped at midnight to kick start ESPN’s hoops marathon.

The Hurricanes have also won nine of their last 10 regular-season games versus non-conference opponents away from home, including four on their opponents’ home court.

HELLO, MY NAME IS RION

Freshman guard Rion Brown had his best shooting night of his young career, scoring a career-high 17 points off the bench to lead Miami in Friday’s 88-65 win over North Carolina Central.

Brown, whose previous high of three points came against Jacksonville in the season-opener, finished the game shooting 5-of-9 from the field, 2-of-5 from behind the arc and 5-of-6 from the line.

Brown’s 17 points tied him with Duke’s Seth Curry for the third-highest scoring total by an ACC player of the bench this season. C.J. Leslie of NC State scored a conference-best 21 points off the bench against Tennessee Tech on Nov. 12.

CHAIRMAN OF THE BOARDS

After posting back-to-back +20 rebounding margins, the Hurricanes lead the ACC with a +15.3 rebounding margin over three games this season. Sophomore center Reggie Johnson leads Miami with 10.0 rebounds per game, including a career-high tying 12 at Memphis.

Miami’s +26 rebounding margin versus North Carolina Central is even better than last Monday’s +20 margin at No. 19 Memphis. The 26-board advantage is the largest for the Hurricanes since they led 57-31 (+26) on the glass in the Charleston Classic championship game win over South Carolina nearly one year ago on Nov. 22, 2009.

Reggie Johnson has posted back-to-back double-doubles for the Hurricanes. Despite playing limited minutes due to foul trouble at No. 19 Memphis, he registered his first career double-double with 12 points and a career-high tying 12 rebounds in 21 minutes. (Not as) Big Reg followed that up with 12 points and 10 boards in 19 minutes versus North Carolina Central.

Miami’s big man is also leading the Hurricanes in blocks with 2.7 per game — including putting up three blocks in consecutive games.

Sixth-year player Adrian Thomas will make his 100th career appearance in Sunday’s game versus Rutgers, becoming the 34th Hurricane to accomplish this. Former teammates James Dews (2006-10) and Brian Asbury (2005-09) hold the Miami program record for career appearances with 130 apiece. Should Thomas play in every game during the regular season, he will tally 127 appearances with an opportunity to break the record with an extended postseason.

Log onto HurricaneSports.com during Miami athletic events to chat with Miami insiders and other fans about the game and your favorite student-athletes. To join the chat, click on the Cover It Live program found online with each game’s preview beginning 30 minutes before tip-off.