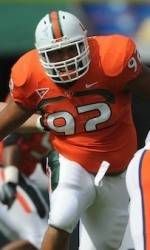 CORAL GABLES, Fla. — The University of Miami concluded practice and on-the-field preparations for Saturday’s game at Georgia Tech. The best news on this day is that defensive tackle Josh Holmes is listed as probable for game against the Yellow Jackets, who will feature a run-heavy offense.

Don’t forget to come on out to Monty’s in the Grove for the Hurricane Hotline tonight from 7 to 9 p.m. Coach Shannon, Joe Zagacki and Josh Darrow will be live on the scene from 7-8 p.m.  Director of Athletics Kirby Hocutt will join the crew from 8-9 p.m. along with special guests Mike Dee, CEO of the Miami Dolphins, and Bruce Feldman, national writer for ESPN.com and ESPN The Magazine.

The complete injury report is below: