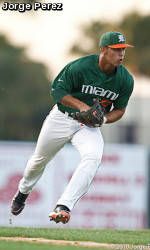 GREENSBORO, N.C. – Fourth-seeded Miami was unable to hold on to a five-run ninth inning lead and eventually lost to eighth-seeded Boston College, 12-10, in 12 innings Thursday afternoon on day two of the Atlantic Coast Conference Baseball Championship at NewBridge Bank Park.

After Miami (40-16) scored five runs in the top of the ninth to take a commanding 10-5 lead, Boston College (30-27) responded with five of their own in the bottom half, sending the game into extra frames. Both teams were then held off the board until BC’s 12th, when Andrew Lawrence hit the first pitch he saw over the wall in right for a two-run, walk-off blast.

Both teams are now 1-1 in the tournament. Miami has Friday off before playing top-seeded Virginia at noon on Saturday. Boston College will face fifth-seeded Florida State Friday at noon.

Eight of nine starters for the `Canes finished with at least one hit, including Yasmani Grandal and Harold Martinez, who combined to go 5-for-11 with two RBI and four runs scored. Grandal hit his 14th homer of the season and finished with three hits and a walk. Zeke DeVoss finished the day 1-for-3 with a grand slam, two walks, two runs scored and a career-high five RBI.

Garret Smith led BC at the plate, going 3-for-5. John Spatola had four RBI, while Lawrence had two hits, two RBI and two runs scored.

The Eagles plated a pair of unearned runs in the first after a UM throwing error allowed one run to score before an RBI grounder to second put the Eagles up 2-0 after one.

A two-run double off the bat of Smith in the fifth scored BC’s third run of the contest before an RBI groundout moved the Eagles’ lead to 4-0 after five.

The Hurricanes finally got on the board in the sixth, scoring four runs to even things up. The inning was highlighted by a lead-off homer by Grandal and later a Stephen Perez single that eventually tied it up.

BC re-took the lead, 5-4, with a run in the seventh, but the `Canes tied it right back up in the eighth with another Perez RBI single.

The `Canes briefly broke the game open in the ninth, going ahead on a Martinez RBI single before an eventual grand slam homer by DeVoss.

The Eagles weren’t phased however, scoring five of their own – capped off by a three-run shot by Spatola after two runs had come across earlier in the frame.